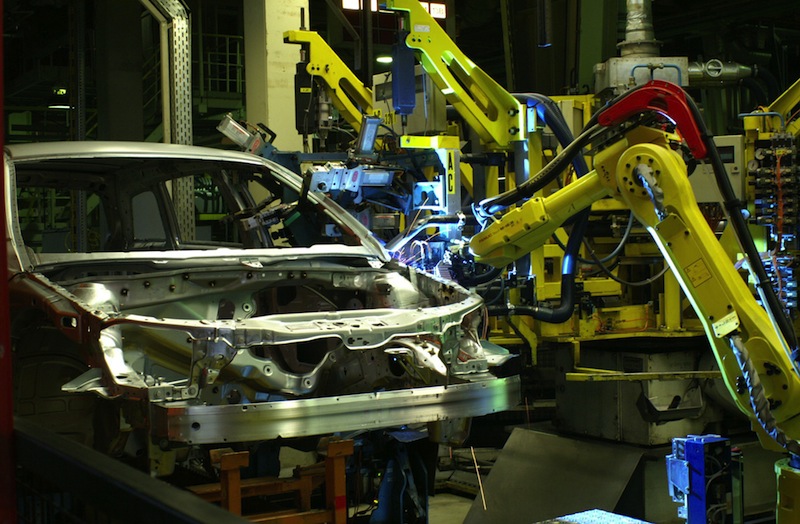 The use of aluminium in the automotive industry is poised to explode as OEMs seek to reduce the weight of their vehicles. But incorporating the lightweight metal into the body-in-white (BIW) of mass-market models poses significant problems for carmakers, not least of which is developing cheap and robust methods for aluminium-to-aluminium joins, and joins with other materials.

Several OEMS, including Ford, General Motors and Tesla, have already tackled this problem head on. However, in order to do so, they have all had to invest heavily – and get to grips with a plethora of joining technologies.

Resistance spot welding (RSW) is ubiquitous in the automotive industry, having been used by carmakers to join metal structures for many decades. A typical vehicle might contain anything between 2,000 and 5,000 spot welds; the process is inexpensive, rapid and easy to automate. RSW lines are also highly flexible, with each gun able to alter its welding schedule to cope with multiple models.

However, the use of RSW to join aluminium structures presents a number of challenges. Compared with steel, the melting point of aluminium is significantly lower, but it demonstrates a higher thermal conductivity. Meanwhile, the electrical resistance of aluminium drops rapidly during the spot-welding process. As a result of these factors, the welding current must be two to three times higher than is needed for steel and the welding time cut by two-thirds. This means the electric parameters need to be controlled more precisely, in a narrower time window, and per-weld energy costs are increased. Furthermore, the aluminium forms a corrosion-resistant oxide on its surface which reacts during the welding process and quickly contaminates the spot-welding tip, reducing its life.

Ford has minimised welding on its new F-150 model

Ford minimises welding for new F-150Consequently, Ford has chosen to avoid the use of welding almost completely for the production of its aluminium-bodied F-150 pick-up truck. The company’s plant in Dearborn, Michigan, is producing 1,200 of these pick-up trucks a day, and the bodyshop there has been transformed for this purpose at a cost of $359m. Ford is now using adhesives from Dow Automotive Systems, self-pierce rivets (SPR) from Henrob, Semblex flow-drill screws, clinching and laser welding to join the body of the F-150. In place of traditional RSW robots, the Dearborn plant boasts 500 machines to carry out these joining operations.

SPR is a cold joining process used to fasten two or more sheets of material. A rivet is driven through the top sheet material, forcing the lower sheet material into a die and causing the rivet to radially flare, forming a mechanical interlock. Henrob says that SPR joins are 30% stronger than those achieved with RSW, and its rivets have been used in vehicle construction since Audi's A8 was developed in 1993. There are around 2,500 rivets on the 2015 F-150, compared with 5,000 spot welds on the 2014 model.

Around 150 flow-drill screws are used in instances where access is limited. Each screw simultaneously penetrates and joins between two and four sheets of aluminium at high speed; its sharp tip heats and pushes the metal aside. No back support, pre-drilling or pre-punching are required.

More than 100 metres of structural adhesive are used per body to supplement these rivets and screws. Ford uses Alcoa's 951 pre-treatment to increase the durability of the adhesive bonds – by up to nine times in comparison with conventional conversion coating systems such as titanium zirconium, according to the aluminium producer. The treatment is applied using immersion or spray processes, and is essentially ‘transparent’ to downstream steps in the vehicle manufacturing process, such as forming and painting.

In addition, clinching is used for the closures, underbodies, framing and sidebodies, while laser welding is applied to the roofs after initial riveting.

The use of primarily mechanical means to join the body of the F-150 makes sense, given that Ford likely obtained much of its know-how through its ownership of aluminium pioneer Jaguar Land Rover (JLR), which relies heavily on SPR for the production of its vehicles.

However, rivets add cost and weight, and riveting guns have a limited range of joint configurations. Furthermore, the end-of-life recycling of aluminium parts containing rivets is more complex. As a result, a number of OEMs have been working on welding processes suitable for use with aluminium. 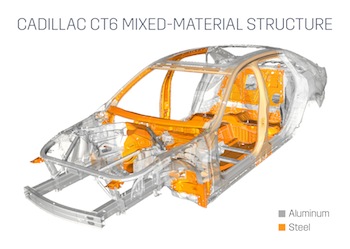 GM has developed an RSW process for Cadillac bodies

GM pioneers aluminium RSWGeneral Motors (GM) has developed an RSW process with a patented, multi-ring, domed electrode to reliably weld sheet, extruded and cast aluminium to aluminium. The domed electrode head disrupts the oxide that forms on the surface of the metal to enable a stronger weld than otherwise possible.

In 2012, the company started using this process on the bonnet of the Cadillac CTS-V and the liftgate of the hybrid versions of the Chevrolet Tahoe and GMC Yukon. Jon Lauckner, GM chief technology officer and vice-president of global R&D, said at the time: “The ability to weld aluminium body structures and closures in such a robust fashion [gives] GM a unique manufacturing advantage.”

In 2015, GM started using its RSW process for the manufacture of the aluminium-intensive Cadillac CT6 luxury sedan at its Detroit-Hamtramck plant, Michigan. Aluminium accounts for 64% of the vehicle's body structure, with the balance being steel (13 different grades of metal in total), enabling a weight saving of 90kg compared with a predominately steel construction. In order to cope with this mixed-material approach, GM invested $300m in the Detroit-Hamtramck plant, where five techniques are used to join the vehicle.

The RSW technology is used for aluminium-to-aluminium joins. Crucially, this allows the company to reduce the number of SPRs to around 350. To join aluminium and steel where access is restricted to one side, flow-drill screws are employed in combination with adhesives (180 metres in total). Aluminium laser welding creates seamless joins in the exterior panels, and laser arc welding is also used.

“The structure of the CT6 is one of the most advanced body systems we’ve ever produced,” says Travis Hester, the executive chief engineer for the CT6. “The innovation surrounding our joining techniques has enabled us to create a vehicle structure with the highest torsional rigidity of any Cadillac while achieving one of the most mass-efficient vehicles in the segment.”

DeltaSpot is particularly suitable for the welding of aluminium sheets. The DeltaSpot robot welding gun features a process tape that runs continuously between the electrodes and the sheets being joined. The tape transfers the welding current and, at the same time, protects the contact surfaces of the electrodes from contamination by the oxide layer. This protection increases the service life of the electrodes significantly, to approximately 30,000 welding points with aluminium sheets, according to Fronius.

The electrical and thermal properties of the tape can be tailored for a given application. For the traditional RSW of two one-millimetre aluminium sheets, a current of 35,000-40,000A is required; the process tape reduces this to 16,000A. Furthermore, the use of the tape prevents spattering and the associated damage to components. The process tape lasts for around 7,000 welding points, and if every segment of the welding tape is used two or three times, the service life can be extended accordingly. Replacing the tape is a relatively quick and simple process. 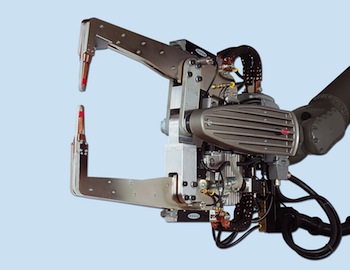 CMT can be used to join aluminium and steel components, and is an adapted metal inert gas (MIG) process. Similar to MIG welding, a weld wire and a shielding gas are fed through a welding torch, and electricity arcs between the aluminium filler wire and the welding surface, causing the tip of the weld wire to liquefy with the aluminium base material and wet the galvanised steel. When the filler metal dips into the weld pool, the arc is extinguished and the welding current is lowered.

The filler wire is retracted constantly at very short intervals during the short circuit, facilitating the detachment of droplets in a controlled manner to give a clean, spatter-free material transfer. The movement of the filler wire must take place at a very high frequency, requiring the use of a quick-response, gearless wire drive mounted directly on the torch. The wire-feeding hose features a wire buffer that compensates for the forwards and backwards movements of the wire. The wire motion is reversed and the process begins all over again, leading to the production of strong welds using a fraction of the energy of MIG welding.

Honda causes a stir with continuous FSWIn order to cope with mixed-material constructions, Honda Motor has developed a technology for the continuous friction stir welding (FSW) of steel and aluminium components. The company first used this technique to join the front subframe of the North American version of the 2013 Accord.

FSW is a solid-state joining process that creates high-quality, high-strength butt or lap joints with a wide range of material thicknesses and lengths. A rotating FSW tool is plunged between two clamped plates, and the frictional heat causes a plasticised zone to form around the tool. As the rotating tool moves along the joint line, a consolidated solid-phase joint is formed. Honda applies a sealing agent between the steel and aluminium parts where they are to be joined in an effort to prevent corrosion.

“The result [of recent research] is a proven process that overcomes the speed, scale and quality limitations of FSW that previously were showstoppers for the auto industry” – Yuri Hovanski, PNNL

Being a solid-state process, FSW eliminates many of the defects associated with fusion welding techniques such as shrinkage, solidification cracking and porosity. Honda says the technology produces welds that are as strong as those produced using MIG welding processes. Moreover, FSW consumes around half the energy required for MIG welding.

Conventional FSW requires the use of large machines, but Honda has developed a C-type welding gun that can be fitted to an industrial robot. This system can also be employed for aluminium-to-aluminium welding and can therefore be used for the production of a fully aluminium subframe.

GM and partners enhance FSWIn partnership with GM, Alcoa and TWB, researchers at the Pacific Northwest National Laboratory (PNNL) are using FSW to join aluminium sheets of varying thicknesses. The researchers claim that the process is ten times faster than current FSW techniques and could therefore enable the mass production of aluminium tailor-welded blanks (TWBs). The programme manager at PNNL, Yuri Hovanski, says: “The result is a proven process that overcomes the speed, scale and quality limitations of FSW that previously were showstoppers for the auto industry.”

The researchers examined several joining techniques for the production of blanks before selecting FSW, which was the only one to pass all of GM's specifications for weld quality. A comprehensive series of laboratory-scale welding tests were then conducted on aluminium sheets provided by Alcoa. 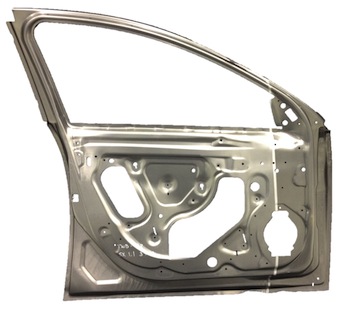 Dozens of FSW tools of varying shapes, lengths and diameters were created. These were assessed against a variety of weld parameters, such as the depth, rotation speed and angle of the tool. Through statistical analysis, the team identified a combination of tool specification and weld parameters that could consistently withstand high-speed production demands. “What we discovered was a win-win,” Hovanski continues. “The faster the weld, the better the quality and strength of the join, thus the significant increase in speed.”

PNNL provided the weld and tool specifications to TWB and GM. TWB then welded, formed and analysed more than 100 aluminium blanks in close coordination with GM, making the company the first qualified supplier of aluminium tailor-welded blanks. The vehicle-maker has since stamped its first full-sized inner-door panel supplied by TWB from aluminium sheets in varying thicknesses.

TWB now has a dedicated FSW machine at its production facility in Michigan, which has been built around the PNNL process and is capable of producing up to 250,000 parts per year. “TWB can now provide aluminium tailor welds not only to GM, but the entire automotive industry,” concludes Blair Carlson, a laboratory group manager at GM.