Editor's note: A sense of scale 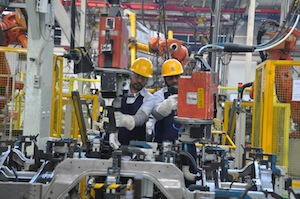 With the BRIC countries it’s always been about scale; scale of economies in production costs, scale of the potential market, scale of investment. In recent years this has all been very positive, but the news now coming from Russia and Brazil is of economic stagnation and, with a few exceptions, much reduced output. China, albeit having some financial wobbles, still remains an important and strong driver for growth in automotive manufacturing. However, at the time of putting together our September-October issue, the devaluing of the yuan, the falling of the stock market and a noticeably cooling market overall have perhaps dampened the previous optimism.

But optimism and indeed the vehicle market generally appear to be growing in India. Here, even the commercial vehicle market, so long in decline, is now growing. While India shares many of the attributes that have attracted vehicle-makers to China (low costs, huge potential market), it is a very different proposition. Its economy is unlikely to grow at such an explosive rate, so this tempers huge investment and the infrastructure needed for efficient movement of parts and finished vehicles still lags behind what is needed, although improvements are being made. Also, India’s car market has proven difficult for any newcomers to crack, but new vehicles are being designed specifically for this market and there is steady investment in production as OEMs increasingly look to India as a regional manufacturing hub.

Scale has also been at the forefront of Volvo’s recent activities as the Swedish carmaker expands its global manufacturing footprint and starts series production of vehicles using its new Scalable Product Architecture. The company has built a brand new bodyshop at its Torslanda plant to produce the SPA platform and this will also be made at its Chinese and US plants (when built).

Much is made of the challenges when joining structural components on the rising number of vehicles utilising different materials. But this also creates challenges when forming the components and this issue’s technology feature takes a close look at hot and hydroforming, plus the growing demand to form composite panels for volume production.