As OEMs explore reinforced plastics, the composites industry is preparing to capitalise on this trend 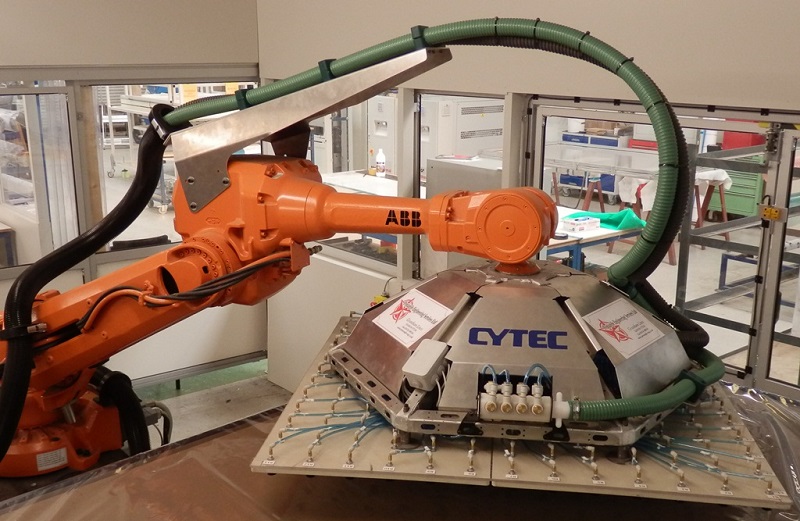 US materials supplier Cytec Industries has done well out of the aerospace industry's switch from metal to carbon fibre-reinforced plastic (CFRP)-intensive aircraft, and the company sees the automotive industry as key to its future growth. In 2012, Cytec bought UK-based composites specialist Umeco for $439m and in doing so acquired Umeco Structural Materials (USM) of Heanor. USM had significant experience in the motorsport and niche automotive markets; its lightweight materials were employed in Koenigsegg's record-breaking Agera R.

USM was renamed Cytec Industrial Materials, and shortly after the acquisition it entered into a strategic partnership with Jaguar Land Rover (JLR) to develop designs, materials and manufacturing concepts for the cost-effective use of composites in automotive applications. Since then, it has been involved in a wide variety of automotive-related research and development projects.

This prepreg enabled CSP to compression-mould a geometrically complex enclosure which is 40% lighter than an equivalent metal component, helping to boost the Spark’s range and driving performance.

CSP is able to manufacture these parts in less than ten minutes with a 150°C cure, but MTM 23 can be rapid-cured in less than three minutes. The company is manufacturing over 4,000 enclosures per year.

According to Markus Aschauer, vice-president and general manager of Cytec Industrial Materials, the company's current composites solutions are viable for production rates of 30,000-50,000 vehicles a year – but it is targeting even higher volumes. To assist in this goal, Cytec has opened a $13m application centre at its Heanor site, Derbyshire.

Alexander Aucken, global automotive manager for Cytec Industries, says: “The application centre now gives us the opportunity to drive the development of our materials to the speed, cost, performance and manufacturing level required for part production at huge volumes by OEMs and tier ones. “No one company can do this, so supply chain development – communication and cooperation throughout the entire supply chain – is absolutely fundamental to market success.” Crucially then, the application centre will enable Cytec to work closely with its OEM, tier-one and tier-two partners to develop these technologies.

Carmelo Lo Faro, CTO of Cytec Industries, says: “The key to composites is the understanding of the application. Cytec does not make parts – we do not compete with our customers – but we need a superb understanding of how these parts are designed and produced, what the key needs of these parts are, to produce the right materials.”

"The key to composites is the understanding of the application"– Carmelo Lo Faro, Cytec Industries

The centre plays host to numerous automated manufacturing cells, each demonstrating liquid- and compression-moulding technologies developed by Cytec and its partners to make the production of composite parts cheaper and more efficient. These cells can be modified or swapped out depending on the projects the company is working on. Much of Cytec’s work is with thermosets, but Lo Faro describes the company as “materials agnostic” and therefore happy to work with thermoplastics too.

Combining technologiesThe most physically imposing manufacturing cell features a Langzauner 1600t downstroke press, which can be used with hot compression moulding, thermoforming and high-pressure resin-transfer moulding (HP-RTM) processes. Cytec is using this press to evaluate and characterise its XMTR750 two-component epoxy for HP-RTM applications. This epoxy can be cured in three to five minutes at 120-130°C, can be de-moulded while hot, is compatible with internal release agents and demonstrates a suitable viscosity for use with low injection pressures.

The company has also invested in a Formaplex HP-RTM tool featuring integrated sensors which enable the analysis of cure distortion and resin flow, which could help with the design of its customers' manufacturing processes.

While these technologies are useful in isolation, Aucken is keen to stress that the best results are achieved when they are used in combination. For example, one of the cells – developed as part of the ACTIVATE project – enables the automated production of cross-ply prepregs with localised slashing. The latter improves the drapability of the prepreg in a tool without impacting mechanical performance in areas where it is unnecessary.

This cell comprises an Assyst Bullmer cutting machine and a six-axis ABB IRB6700 robot – with 3.2 metres of reach and a payload capability of 150kg – fitted with a vacuum end effector.

Using these machines, two rolls of prepreg are unrolled side-by-side at 0° on the cutting table. This prepreg is then slashed via kiss cutting with an ultrasonic knife, which enables the prepreg to be cut without damaging its backing paper.

The first roll of prepreg is cut into squares that are picked up by the end effector, and the backing paper is removed. The surface tack of the prepreg has been modified to ensure that it does not get stuck to the end effector. These squares can then be placed on top of the second roll of prepreg at 90°, to create a 0/90° crossply prepreg which can be off-wound.

These crossply prepregs can be processed further in another cell designed for the manufacture of tailored blanks. The prepreg is unrolled on a Zund flatbed CNC cutting machine, which is fitted with an ultrasonic knife and is capable of cutting speeds of 1-1,000mm/s.

The prepreg is cut into kit plies which are laid up on an adjacent turntable to form two-dimensional blanks using a six-axis ABB 4600 robot with 2 metres of reach and a payload capability of 60kg. The robot is fitted with a pick-and-place end effector with individually actuated suction cups.

These tailored blanks can be laid up on a membrane for double-diaphragm forming. According to Cytec, this process is affordable – at less than £35 per kilogramme of material processed – and can be operated with a five-minute takt time.

Using this cell, the membrane containing the blank is placed in a frame and a vacuum is applied. This blank is then preheated within the diaphragm forming fixture, which enables the production of parts with complex geometries. Finally, the blank is compression-moulded in a Schubert 350t upstroking hydraulic press, where it undergoes a five-minute cure cycle at 140°C. Finally, the part is de-moulded at 140°C before final inspection and trimming.

Taking care of wasteCytec has also developed a recycling process for the prepreg offcuts generated by this manufacturing process. Continuous strips of remnant prepreg are fed into an Xtrutech XTS 24D twin-screw extruder at a constant feed rate. Variable-pitch feed screws cut and mix these offcuts to produce a material containing fibres of random length and orientation, which is then extruded onto a set of nip rolls and calendared into a flat strip.

The resultant material demonstrates similar mechanical properties and processing characteristics to sheet-moulding compound, and can be used to make non-structural parts or can be co-moulded with conventional prepregs. 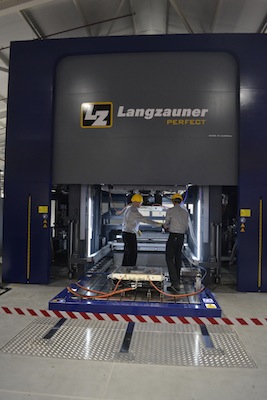 Learning from VARCITYThis recycling process was developed in collaboration with JLR and also Penso – a composite part manufacturing company in which Cytec Industries recently acquired some equity – as part of the VARCITY project.

According to the project abstract, VARCITY aims to deliver “new vehicle-body architectures for the premium city car of 2020, which will utilise the structural performance and weight advantages of advanced carbon fibre-reinforced, plastic-based composites whilst delivering a sustainable and economically viable proposition for volume production”. The results of VARCITY will be released in early 2016.

Aucken says: “Working with JLR, or any other of the OEMs in the UK, Asia, the USA – and with their supply chains – the thing you learn, which I think is most fundamental, is you have to keep asking questions, you have to keep communicating.

“It’s that dialogue that builds the trust, which builds the relationships that then allow you to move forward as a cohesive group. It’s the only way to make the types of leaps forward that industrial markets need from the composites industry.”

In December 2015, Cytec itself was acquired by Belgian chemicals giant Solvay in a deal worth around $6.4 billion. When the announcement was made in July 2015, the CEO of Solvay, Jean-Pierre Clamadieu, said that the acquisition represented a unique opportunity for Solvay to boost its portfolio of lightweight materials for the aerospace and automotive markets.

Solvay generated sales of €10.2 billion ($11.1 billion) in 2014. François Hincker, manager of Solvay Integration Management Office, says: “We have the resources, the financial commitment, to invest in the industry to make the adoption of composites even bigger than it is today.”

Carmelo Lo Faro concludes: “Solvay brings us a number of complimentary capabilities. The obvious example that everyone talks about is thermoplastics. The other point about Solvay is its long-term view. We are not working for next year; we are working for the next 30 or 40 years.”