BMW ramps up at Hams Hall 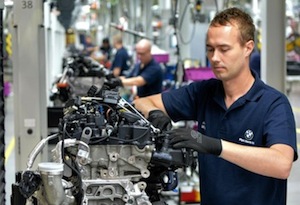 UK – The engine plant has installed three new production lines as part of a £750m investment by BMW across its UK plants and is now stepping up production of the latest three- and four-cylinder engines. Hams Hall is expected to machine over 1m components this year as supply extends to other factories in the Group.

“The transformation in our plant has been huge,” said Markus Fallboehmer, plant director at Hams Hall. “Over the last few years we have completely re-developed our two main production areas and installed over 600 brand-new pieces of equipment and machinery.” He added that the factory has also strengthened its workforce by giving contracts to 100 individuals, including some who were previously working on a temporary basis, and trebling the number of apprentices.

The engines and machined components made at Hams Hall are fitted to a range of models, including the new Mini Clubman and the BMW 7 series which will enter the market in the next few weeks. In addition to the volume production, three-cylinder, 1.5-litre petrol engines are being hand-built for the i8, the plug-in hybrid sport car.

Hams Hall is operating alongside other plants in Germany and Austria in producing next-generation engines. “Our new engine family of highly efficient three-, four- and six-cylinder engines have a standard design, a high number of similar parts and a uniform process for manufacture,” explains Ilka Horstmeier, head of BMW Group’s global production network for engines and electrified powertrain. “This gives us a large amount of flexibility and means we can optimise production between each of our manufacturing locations and respond quickly to changes in customer demand or market developments.”