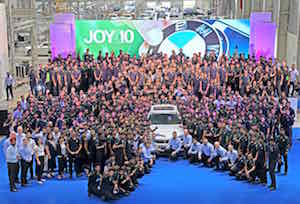 India – A decade after launch, the factory is able to produce up to eight car models on two assembly lines, courtesy of sophisticated systems engineering and 500 personnel. The cumulative output has now exceeded 57,000 vehicles.

Jochen Stallkamp, managing director of Plant Chennai, congratulated the team for “producing cars with more than 50% localisation content and achieving the high international quality standards as any of the BMW Group production facilities globally”. The local content was raised above 50% in line with BMW’s ‘Make in India’ strategy.

President of BMW Group India, Vikram Pawah, added that the factory “will play a crucial role in fostering BMW Group’s ambitions in India”. The Group is present in the Indian market across its three brands, BMW, Mini and Rolls-Royce, and in both the passenger car and motorcycle segments. The company has so far invested 11.3 billion rupees ($174m) in its Indian subsidiaries, including its financial services arm.