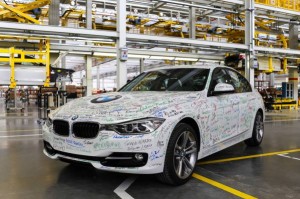 Brazil – The company says that more than €200m will be invested at the plant in Santa Catarina State over the next few years, resulting in a production capacity of over 30,000 vehicles per annum. The first car to roll off the assembly line was a 328i ActiveFlex. This car is specifically designed for the flexible use of either ethanol or petrol to meet the requirements of the Brazilian market.

Construction of the production facility is due to be completed by September 2015, and will include a body shop and a paintshop. The plant is scheduled to produce the following models: MINI Countryman, BMW 1 Series 5-door model, BMW 3 Series Sedan, BMW X1, and BMW X3.