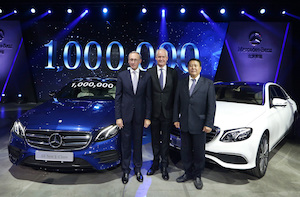 China – The one-millionth vehicle to roll off the line at Beijing Benz Automotive Co. (BBAC) was an E-Class, the first Mercedes-Benz model to be made locally. The third-generation E-Class entered production at BBAC in June this year.

Xu Heyi, chairman of BAIC Group and its BAIC Motor subsidiary, said the milestone “marks not only a breakthrough in scale for BBAC, but also the realisation of a qualitative leap in the systemic development of quality, craftsmanship, technology and procurement”. Hubertus Troska, management board member with responsibility for Daimler Greater China, described it as “solid proof of our ‘Made in China, for China’ commitment”.

“BBAC is key to the long-term and sustainable development of the Mercedes-Benz brand in China, and we will continue developing it into one of the most pioneering manufacturing sites in Daimler’s global production network,” said Troska.

Last year, China became the largest market for Mercedes-Benz cars and the OEM now makes its C-Class, E-Class, GLA and GLC in the country. The E-Class is the highest-volume Mercedes model in history, with over 13m saloons and estates delivered worldwide. In the first ten months of 2016, more were sold in China than any other market, and the long-wheelbase version is expected to become a growth driver for the brand in China.