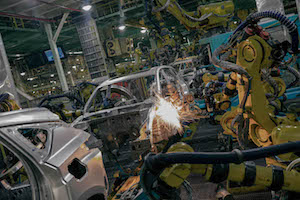 US - Honda is now making the all-new 2019 Acura RDX SUV at its East Liberty Auto Plant. This follows on from a US$54m investment in new technologies and processes at the facility, including a multi-layer paint system, a roller hemming process used specifically for the model's ultra-wide panoramic roof, and the inclusion of structural adhesives for enhanced body rigidity.

"This new RDX defines the future of Acura, and our Ohio team did an incredible job preparing this first in a new generation of Acura vehicles for our customers," said Jim Hefner, plant manager at the East Liberty Auto Plant. "Paired with a new Ohio-made 2.0-litre turbo engine, an all-new platform and a host of new technologies, the 2019 RDX sets a new high bar for style, performance and sophistication in a compact luxury SUV."

Since its launch in 2006, Honda has sold over 375,000 units of the RDX in the US, all of which have been made in Ohio. 2017 marked the third consecutive record year for sales of the model.

Honda also recently announced that production of its all-new 2019 Insight is underway at its Indiana plant, and that it would spend $61.5m on its Indiana and Ohio plants to prepare for new electrified models.