Breaching the Wall, building the lines

This weekend marked the 30th anniversary of a major turning point in world history - the fall of the Berlin Wall. Despite the political upheaval that followed and even new borders being drawn, the Central and Eastern Europe region has seen its strong engineering and industrial heritage re-established with automotive manufacturing underpinning much of the economic progress…

November 1989 saw the most significant event in Europe since the end of the Second World War, one that eventually ushered in an entirely new world order. Three decades on from the fall of the Berlin Wall, many of the European countries that once fell under harsh communist rule and deep Soviet influence are now thriving free market economies. 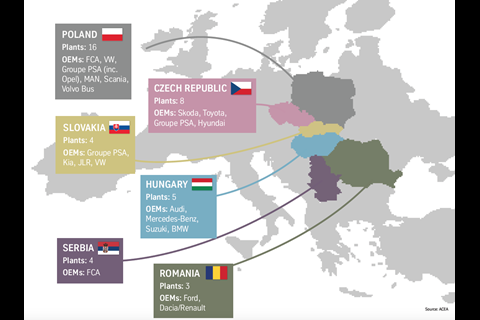 After many decades of vehicle production, the heartlands of European automotive manufacturing are undergoing a shift eastward. Highlighting the investments, innovations and impact, AMS looks at a group of nations in a region that’s ramping up… 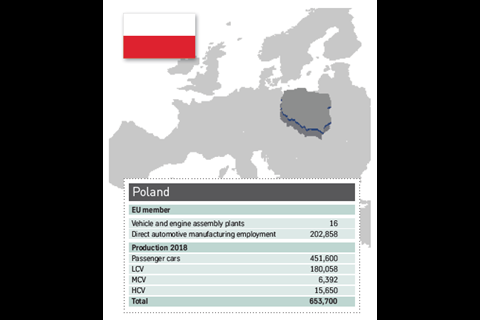 The story from Poland is tinged with negativity and uncertainty over under-used plants and falling production; this is the case at Opel Gliwice, with 2018 output dropping around 25% from 165,000 vehicles made in 2017. There is more positive news at Volkswagen’s factory at Poznan which makes the Caddy compact van and a small number of Transporter vans 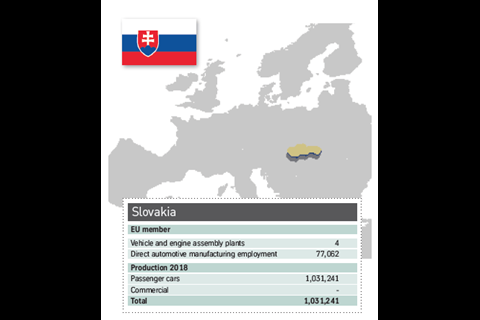 Here production volumes are remarkably strong and stable, reaching over 1m vehicles in each of the last three years. The largest factory in the country is Volkswagen’s in Bratislava, and the Kia plant at Zilina works closely with the Hyundai plant across the border in the Czech Republic. Production should be boosted further once the all-new Jaguar Land Rover plant at Nitra is running at full rates 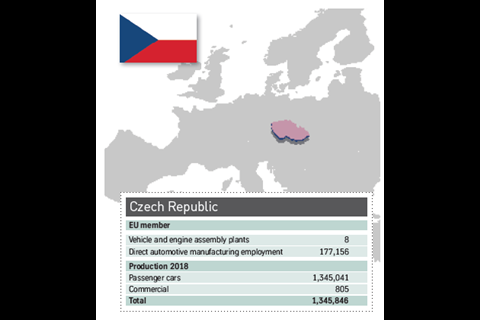 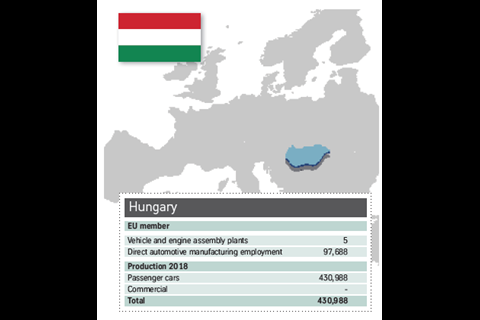 Production in Hungary is growing strongly with BMW due to open a brand new plant at Debrecen costing €1bn (US$1.10bn). 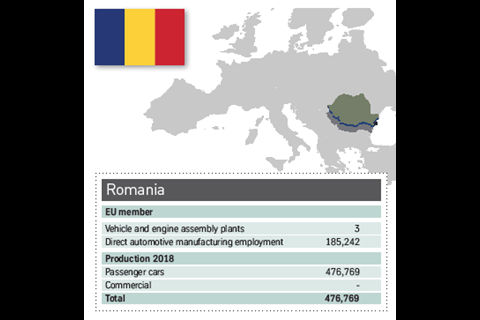 Vehicle production in Romania is represented by the Dacia Mioveni and Ford Craiova plants. Dacia made just over 335,200 cars in 2018, meanwhile Ford Romania is about to see a period of growth, following a period of uncertainty 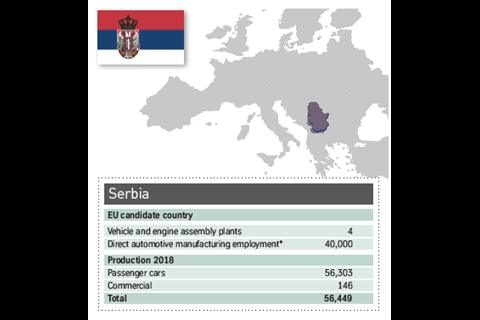 Serbia is currently a small player in vehicle production with only the under-utilised Fiat factory making the 500L mini-MPV. However, the country is anticipating a major boost with VW expected to confirm it as the location for a new multi-brand group plant

Despite the political upheaval and even new borders being drawn, it didn’t take long for the automotive manufacturing industry to set up operations there. Since the late 1990s, the cluster of nations to the east and south-east of Germany has received substantial investment from European, Japanese and Korean vehicle companies seeking new manufacturing sites for both vehicles and components. In a relatively short period of time, almost every major vehicle brand has invested in the area covered by Poland, Hungary, Czech Republic, Slovakia, Romania and Serbia (see gallery above).

A Czech proverb puts it best, patience brings roses, and after the stasis of the post-war decades, it’s pleasing to see such potential being realised.

In our Central and Eastern Europe supplement, published this autumn, AMS runs the rule over Europe’s fastest growing vehicle-producing nations as they enable a rapid expansion of several OEMs’ geographic bases. Highlighting the investments, innovations and impact, we look at this bloc of nations as it ramps up to the point of producing 4m vehicles per year.

I visited Skoda’s Kvasiny plant, a facility that’s been transformed over the past four years. Coping with several models already, the portfolio is due to expand further with a PHEV Superb. Kvasiny came under new leadership this year with Milos Halbich replacing Jiri Cerny, who left for China and role with SAIC-Volkswagen.

Before overseeing some transformative years with Skoda, Cerny was head of production at TPCA, another major vehicle manufacturing site in the Czech Republic. We look at how the facility combines the talents of two OEMs, Toyota and Groupe PSA, to produce a trio of city cars. With the segment facing an uncertain future, it’s likely that big changes await the plant in Kolin.

My third stop in the Czech Republic took me to Hyundai’s plant at Nosovice where I saw the collaborative approach to production quality that prompted the OEM to locate assembly of its N performance brand at this facility.

Across the border in Slovakia, JLR has joined Kia, PSA and Volkswagen on the list of OEMs operating there. With a vibrant and well-established automotive supply chain and significant financial incentives available from government sources, Slovakia proved an attractive prospect for JLR. Nick Gibbs visits the OEM’s new Defender assembly line at the purpose-built factory in Nitra.

We also reach further east to examine two examples of automotive manufacturing in Russia: the vast AvtoVAZ plant at Togliatti and Volkswagen’s versatile operations at Kaluga. After many decades when established plants in Germany, Italy, France, Spain, Sweden and the UK produced the bulk of Europe’s vehicle output, the landscape is changing.

The transformation of political, economic and social structures across the region are apparent to anyone fortunate to enough to pay it regular visits. With such a strong engineering and industrial heritage, many Central and Eastern European nations will thrive in a variety of sectors, not least of which is automotive manufacturing, as our many articles on the region will attest.

A Czech proverb puts it best, patience brings roses, and after the stasis of the post-war decades, it’s pleasing to see such potential being realised.