Looking after ‘the triplets’

The Toyota-PSA venture combines talents for the production of a trio of city cars. Gareth Price reports 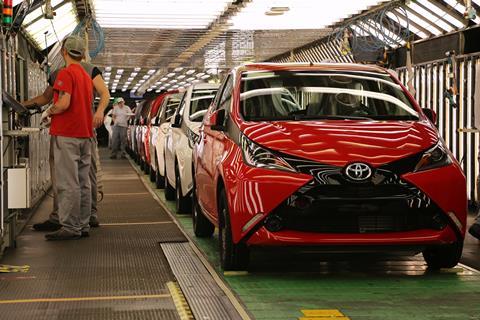 Situated just 55km (35 miles) from the Czech capital Prague, the TPCA plant at Kolin is a joint venture between Toyota and Groupe PSA. It produces a line-up affectionately known on site as ‘the triplets’ – the Toyota Aygo, the Peugeot 108 and the Citroen C1. The Kolin factory began operations around 2005 and is co-owned in a 50-50 split arrangement between the two OEM giants, specifically to assemble these platform-sharing A-segment cars. However, the joint-venture is approaching the end of its tenure and in 2021 Toyota will assume 100% ownership.

Full capacity at the factory is around 300,000 units, although the plant’s record year, 2009, saw 330,000 cars roll off the assembly line. A decade on, the present targets are adjusted to around 185,000. However, the market still manages to surprise even the most wise and experienced manufacturing minds. Last year, at a time when the A-segment was considered to be in decline, TPCA’s final production figures came in at 211,000. As industry watchers know, tastes and demands across the customer base are changing. Sales of ‘the triplets’ remain strong in large markets, such as the UK and France. So, while the segment may be under review in the corridors of power, TPCA’s numbers demonstrate that the buying public still retains a liking for the city car. 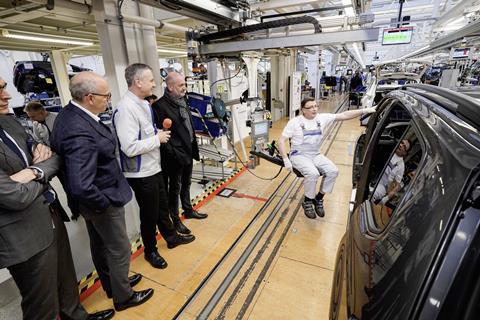 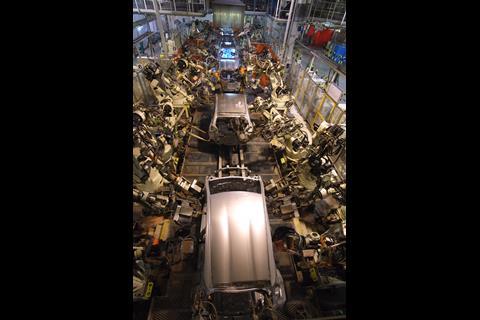 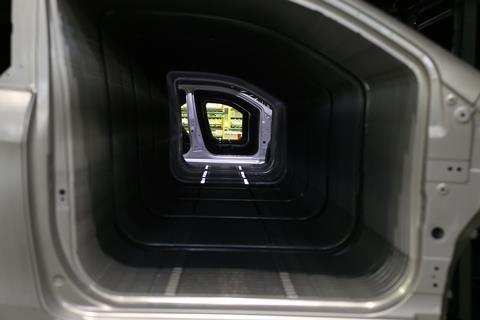 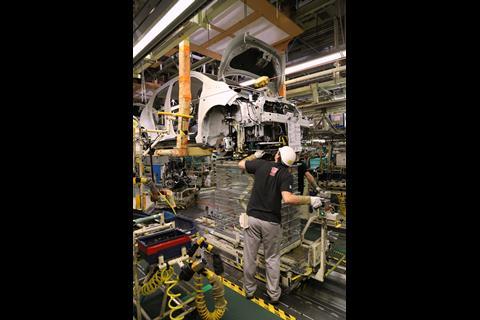 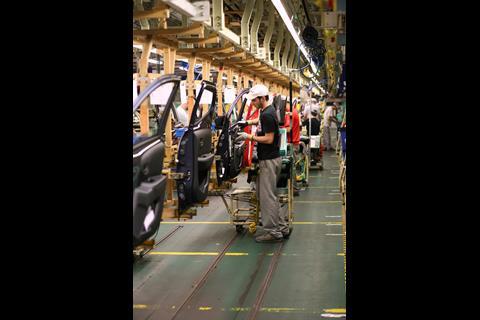 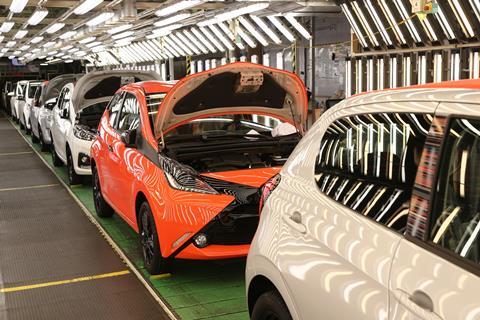 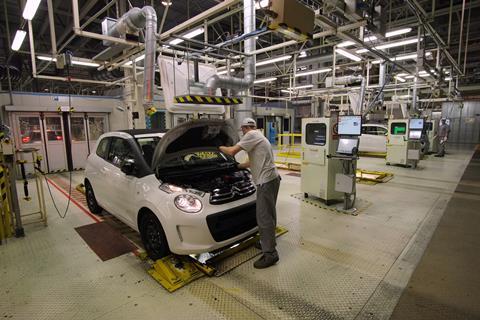 Engines for all of TPCA’s models are supplied from a Toyota facility over the border in Walbrzych, Poland. The PSA models used to receive the group’s own PureTech engines, however that supply switched to the Toyota unit a couple of years ago. The change signalled not only PSA’s gradual departure from the TPCA operation but a desire to review its place in the A-segment as a whole.

From 2021, TPCA will  become a subsidiary of Toyota Motor Europe, joining a stable of seven other plants the OEM operates in Europe.

Around 99% of the cars from TPCA head out of the Czech Republic. As mentioned, the UK and France take the bulk of the stock, with Italy, the Netherlands and Germany taking their share too. In terms of exports, it is an extraordinary figure and one that most car-producing nations would dream of. It is undeniably a success story for the Czech domestic automotive industry despite, curiously, only 1,100 cars being sold into a home market that tends to look more to the local-favourite Skoda and other VW brands for A-segment options.

On the production side, Toyota rules the roost. Operations run along standard Toyota Production System lines in the same fashion as the OEM’s wholly-owned operations do. Meanwhile, PSA takes responsibility for 95% of purchasing and supply chain. According to TPCA, around 80% of supplies come from within the Czech Republic, which is  testament to the strength of the automotive engineering cluster fostered here over the last 10-15 years.

TPCA is a versatile plant with its own stamping line blanking and pressing its own body parts and panels. The single platform BIW feeds through the bodyshop to be met at the end of the process by ‘Godzilla’. This huge six-axis robot lifts the completed BIWs, one-by one, from the ground level bodyshop and into a first-floor paintshop equipped to apply the models’ characteristic bi-tone colour schemes.

A feature of the assembly halls is the proximity of two sub-lines; the instrument panel line and a rear-suspension module line form part of compact, in-hall arrangement. At one time, these lines handled a shared three-way split across each model – an even ratio across each OEM. These days, the Aygo accounts for around 90,000 units with 50-54,000 each of the C1 and the 108. It’s been a gradual change from parity to a clear dominance of Toyota’s model.

The Japanese influence extends to the designated training area, set aside of ergonomics instruction. This is known as the ‘dojo’ – a term that isn’t the reserve of martial arts teaching, but applies wherever principles and practice of movement are conveyed from expert to student. So, the optimal body position for lifting and assembling an Aygo tailgate is as valid a dojo subject as judo or karate. 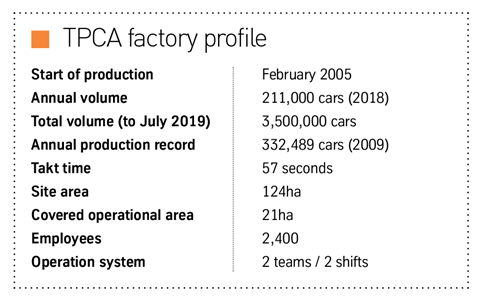 A curious sight in the assembly hall are several vacant areas in the supermarketing zones and even among the bins and racks at lineside. The empty areas are each signposted with a message of pride, accentuating the achievement of space saved through efficiency, better procedure, faster just-in-time turnaround and the constant review of the lineside logistics process. At first, it’s puzzling to see such space in an otherwise bustling hall, but in this context it is clear, you can get something from nothing.

Part of the community

A couple of years ago, during a visit to the Kia factory in neighbouring Slovakia, AMS witnessed how the plant played a far bigger role in the area than just as a workplace and business operation. The community-related investments and activities were a key feature of company philosophy.

It is a similar story at TPCA. Over the last 15 years, the plant has helped to finance an array of projects in the broader Kolin city community. They range from providing hospital equipment to supplying electric bicycles to the municipal police and even installing a water tank at a rescue training centre used by the local fire service.

It’s not just the emergency services who benefit. The funded schemes cover activities as diverse as ice-skating lessons for local children and a school recycling programme.

“The single platform BIW feeds through the bodyshop to be met by ‘Godzilla’, a six-axis robot that lifts it from ground level into a first floor paintshop.”

Before the Second World War, the area had been a key industrial region. It was known as ‘Little Manchester’ and oil and chemicals were the dominant industries. When war brought an end to the prosperity and the country’s communist period took hold, the region became an agricultural area and the site of the current TPCA factory was once a beetroot field.

These days, beets have given way to beats in the form of the music festival that TPCA organises each year for its employees, their families and the wider Kolin community.

In times past, particularly the 19th century, it was familiar practice for large employers to put something back in a local community – even building dwellings, schools and amenities to raise the quality of life for the workforce. It is encouraging to see that thread of community altruism is still active and relevant. It is something the automotive manufacturing industry does well. And it needs to.

Last year, the joint venture partners announced the business realignment that will see Toyota taking over full financial ownership of the Kolin plant. From 2021, TPCA will then become a subsidiary of Toyota Motor Europe, joining a stable of seven other plants the OEM operates in Europe. The availability of educated, skilled and healthy staff – engineering and corporate - is lifeblood to a factory, notwithstanding the advance of automation. As the returns come in a host of economic benefits, TPCA continuing to help Kolin to be an attractive place to live, study and work, is a shrewd move.