Recognised by the WEF Global Lighthouse Network, Renault’s deep dive into industry 4.0 has launched a plethora of active improvement projects 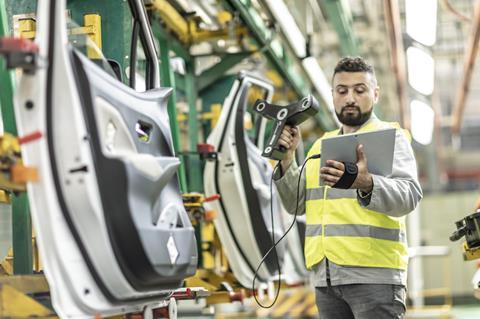 The automotive industry has featured prominently in the latest report from the World Economic Forum that nominates the ‘lighthouses’ – in other words exemplars at a global level – of excellence in the implementation of industry 4.0-led procedures. AMS speaks to one of the OEM nominees form the report, Renault, about the plans and activities that characterise the progress made.

For Renault and its wider Alliance with Nissan and Mitsubishi the concerted effort to broaden the industry 4.0 approach began in 2016. As Eric Marchiol, head of Industry 4.0 for Renault and the Alliance, confirms, that was when two Renault plants were chosen to be the initial prototyping locations for the relevant methodologies and technologies that would then be rolled out more widely though the company’s global manufacturing network.

The two facilities were the Cléon plant near Rouen, northern France, and Curitiba in the southern Brazilian state of Paraná. 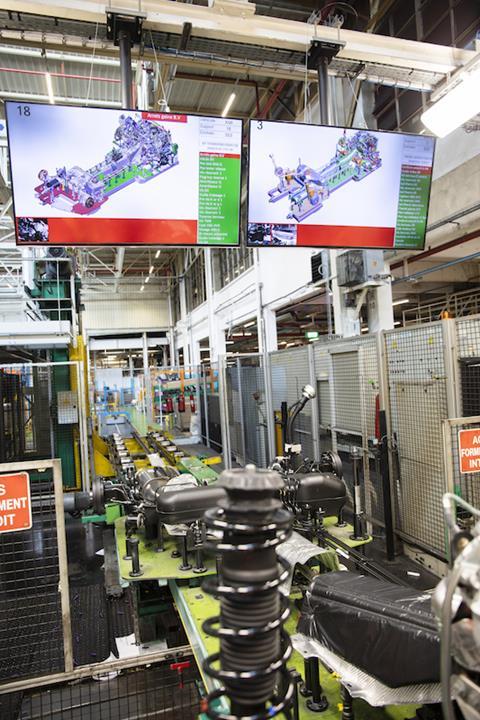 A side-effect of digitalisation throughout the business world, Renault say, is the availability of useful information from outside of for the automotive industry

Marchiol, who is himself based at Renault’s Technical Centre near Paris, says that Cleon produces both diesel engines and electric motors as well as gearboxes, while Curitiba makes petrol engines and also has a vehicle assembly line. He does add, though, that some elements necessary to support the industry 4.0 programme were already in place.

One of those dating from just before 2016 was “considerable investments in physical assets like cobots and AGVs all across the Alliance”.  The second was the existence of digital interconnections that could be implemented in all activities including supply chain. “We had connections before but the game changer was being able to connect everything including legacy systems,” he explains.

As such, Marchiol continues, the existence of a networking infrastructure in Renault’s plants worldwide provided an essential underpinning to everything that followed. Marchiol identifies three factors as “external enablers”: interconnections; wireless capabilities on shopfloor; and a dramatic reduction in the cost of data

What defines the whole enterprise, Marchiol says, is how Renault exploited the more generic factors to shape a strategy to satisfy its own requirements. In that context he identifies what he describes as five “key pillars”:

Equipped to connect the workforce

Marchiol explains that in the first two cases a key enabling factor has been equipping supervisors with handheld tablet computers that enable them to be updated with manufacturing-related information while they are out on the shopfloor. “Previously supervisors would have had software for maintenance and quality issues, for instance, on running on a PC somewhere away from the line,” he states.

“But now that we have mobile data they can stand at a point on the line and have immediate access to information they need. It brings huge savings in time so that on an eight-hour shift as much as an hour that might previously have been spent unproductively moving backwards and forwards between the line and a remote office is now saved.”

But in addition the concept of information-driven procedures has been taken right down to the point of assembly. “We are implementing screens for each assembly line worker with all information about their immediate task displayed to them,” Marchiol confirms. “They can also signal any issues that may be a problem as soon as they occur.”

All of this adds up to what Marchiol describes as a “huge transformation of our legacy systems”. It enables “decisions previously taken by a plant director or supervisor to be taken by a lower level supervisor or technician”, which in turn means that issues can often be resolved before their implications demand higher level involvement.

In the third and fourth instances Marchiol says that “full visibility in the supply chain” is achieved by the fact that there is now a reference number for each part that provides “the ability to check all stocks in all plants including Nissan plants.” Interestingly he says that his own perception is that “the automotive industry lags behind other industries such as food and even aerospace in this respect so we decided to give this a particularly big push.” 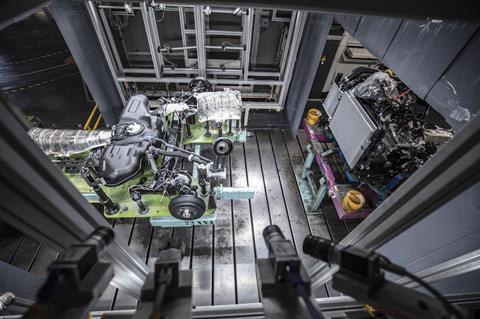 As such he explains that that “we are going to individual traceability for parts, processes, packaging and final assembly.” This has already been achieved across Europe with the aid of an existing Renault network called LoRa but he confirms that the capability will be rolled out further this year to include Morocco and Brazil.

More generally Marchiol observes that all automotive manufacturers have a three-tier planning structure involving, respectively, immediate requirements, then a two-to-three months forward schedule and then a strategy for the next two-to-three years. Usually, though, he states, “they are not linked but we have interconnected them.”

Finally the fifth of these ‘pillars’ entails a comprehensive programme of raw data acquisition involving basic machine performance parameters such as vibration, currents and temperatures. This aspect of the programme is, Marchiol states, “where we implement some big data activity.”

Marchiol says that the start of the initiative stemmed from a directive from the Renault’s then COO to carry out intensive benchmarking against other businesses, an exercise that quickly made it evident that the company “had not made all possible savings.” The initial work at Cléon and Curitiba established an organisational methodology based on “small task teams” but also recognised that an appropriate infrastructure had to be put in place in the locations involved.

“We addressed the foundations,” states Marchiol. “We set up data centres in all plants and also installed wi-fi which requires huge numbers of antennae.” He confirms that all of that was in place by 2018.

But much more importantly, Marchiol further explains, the uniform establishment of that IT infrastructure provided the means to replicate solutions developed in one location across the company’s complete global network of plants. “We can now scale up because we have got the architecture in place to enable us to copy-and-paste solutions from one plant to another,” he confirms.

“We can say to plants this is a must-item and you have to implement it.” So at the global strategic level the company “can keep a balance between innovation and standardisation.” 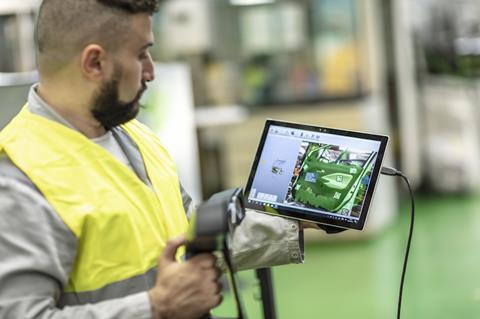 Another continuing policy concerns the acquisition of new equipment. Eric Marchiol, head of Industry 4.0 for Renault and the Alliance, explains that it is now a firm policy for Renault to ensure that all manufacturing equipment complies with the OPCUA communications specification. Indeed he says that believes the company is “at the forefront” of its implementation.  In fact, he adds, the policy is common across across the Alliance. “Renault, Nissan and Mitsubishi do not buy equipment that is not digital ready,” he states flatly.

But, Marchiol continues, a purely human element has also been involved that of making the company’s managers “industry 4.0 proactive”, in other words fully appreciative of what the approach can bring and eager to implement it. “Mindset change is important,” he confirms, adding that this aspect of the initiative has spawned a motto – ‘Go Gemba Digital’ – gemba being the Japanese word for the shopfloor.

A major part of this, Marchiol continues, has been “learning expeditions” in which Renault’s managers are taken to see examples of good practice elsewhere. He indicates that start-up companies are the ones most likely to have something to teach established players such as Renault particularly in areas such as “virtualisation, tracking and data-based prediction”.

Interestingly he also observes that a side-effect of the spread of digitalisation throughout the business world generally is that there is now much more useful information for the automotive industry to acquire from outside of itself than previously. “We learned to appreciate the importance of full track-and-trace capabilities from retail,” he says.

Actual improvement projects are continuously underway. Marchiol confirms that around 70 are currently in process with most of them – about 50 - within Renault and the rest elsewhere in the Alliance. He explains the disparity by saying that implementation is “not as easy in Nissan” because the different legacy systems there mean that the copy-and-paste of IT solutions is not quite so straightforward.

Day-to-running of the whole initiative is now the responsibility, Marchiol says, of two dedicated teams – one for “data capture” issues and one whose remit he describes as that of “connected plants”. He remarks that in the first of those cases there are no longer any “application silos” within Renault. Instead there is now a three-layer data management hierarchy that starts with data capture and then moves through storage and contextualisation to use cases. “We have completely stopped separate data gathering for maintenance, energy or process,” he states.

Meanwhile the connected plants team is “fully in charge of infrastructure, LoRa, wi-fi and data centres”. Above them is a management structure in which each of the teams report each month to the EVP for manufacturing and supply at a meeting at which Marchiol himself acts as secretary.  Marchiol also works with the head of manufacturing IT to decide on new projects.

Summing up what has been achieved so far Marchiol says that “you can now physically see the simplicity of material flows and operations.”  In terms of financial payback he estimates that “the generation and use of real-time information and of data from equipment, not including cobots and AGVs, have saved nearly €300m for an outlay of about half that.” Moreover for the future the existence of digital ready equipment will make further work easier.

“The IT infrastructure is fully updated so that data storage is now on the Cloud for big data with edge computing for real-time processing of data on the shopfloor,” he confirms. “We expect that enhanced data usage will mean that future savings in time-to-market, overall equipment effectiveness, scrap, ramp up and energy will be massive.”