ArcelorMittal Global R&D Head of Automotive Steel Solutions, Jérôme Favero discusses how the company’s Multi Part Integration solution is an innovation that has been driven by the challenging context of Battery Electric Vehicle production 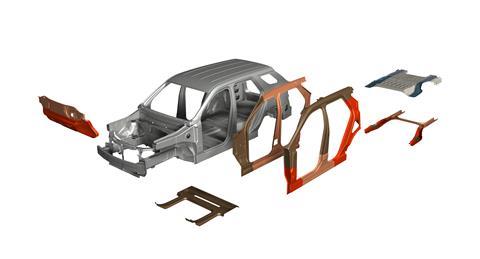 The design and development of new Battery Electric Vehicle (BEV) platforms presents several challenges. First the structure must be reinforced to protect both the heavy batteries and the passengers. The design also must be as cost effective as possible since the cost parity between ICE and BEVs has not yet been reached, and this will be a very important factor in the wider market acceptance of electric vehicles. The third challenge is sustainability. With the increasing market share of BEV sales, the share of CO2eq emissions linked to vehicle production will be more important than that of the use-phase.

Simplification of manufacturing operations and reduction of lead times are a good opportunity to achieve cost savings in operations and make BEV Body-in-White (BIW) more affordable. It is also important to note that some of the BEV manufacturers are either start-ups, or established OEM investing in greenfield plants. In both cases solutions to lower the capital investment can be seen as highly valuable.

In this context, ArcelorMittal Global R&D teams in partnership with ArcelorMittal Tailored Blanks has developed the Multi Part Integration (MPI) concept to simplify the manufacturing and reduce the assembly complexity by maximising the part integration. In other words, make in one part that would require 5 or more parts in current BIWs. This concept also has a positive impact on the lead time for the vehicle’s production.

As well as the potential savings in manufacturing, the MPI concept can also offer benefits in technical weight performance and CO2eq reduction opportunities, especially when the Laser Welded Blanks (LWB) technology is combined with the second generation of Press Hardening Steels (PHS): Usibor 2000 and Ductibor 1000 for lightweighting, and the Usibor 1500 AS with XCarb Recycled and Renewably Produced substrate, for a further reduced CO2eq footprint. 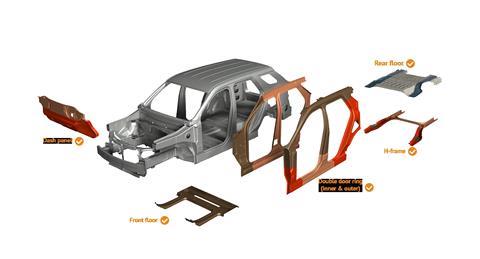 As well as the main objective of simplifying manufacturing, weight reduction was also maximised with the introduction of the second generation of PHS. The higher ultimate tensile strength of Usibor 2000 (1800 MPa) and the use of Ductibor 1000, which offers unmatched crash ductility for a 1000 MPa PHS grade, were key assets to reach the average weight reduction of 10% on all MPI designed parts.

The crash performance was evaluated based on usual load cases applied on BEVs. The MPI solutions were designed to meet same crash performance levels as the existing reference point representative of current BEVs. To produce a robust design, advanced crash material data cards were used that took into consideration the rupture and heat affected zone around spot welds. The formability of the concept, which perhaps appeared challenging due to the large size of the parts, was assessed using a forming numerical simulation. Temperature dependant Forming Limit Curves were used, and the thinning, thickenings and wrinkling risks were evaluated. Locally some modifications on the geometry were implemented to provide an acceptable safety margin in hot stamping.

MPI H-Frame concept benefits of weight and sustainability
Focusing on the H-Frame concept, which is one of the first modules ArcelorMittal developed, this achieved a very interesting design optimisation compared to the current reference; a 10% weight reduction. Thanks to the use of LWB technology, it was possible to propose a very large part with a combination of different thicknesses and grades, including the application of the second generation of PHS. And it is possible to go even further in terms of weight reduction thanks to the suppression of overlaps, which were needed in the reference designs to assemble parts together.

Beside the weight saving, the H-Frame concept also offers a quick win in terms of sustainability with savings of 18% of CO2eq possible (recycling credits considered). In this article, the CO2eq savings are only linked to the component manufacturing, including material production. The use-phase is not considered, but this area would also see improvements with the MPI solution being lighter. The main driver is the reduction of the material gross weight compared to the reference. This is due to the higher material utilisation rate of second generation of PHS being the key driver here. Laser Welded Blanks are a good solution to optimise the material utilisation rate as the blanks are smaller thanks to the suppression of the overlap, and the LWB also gives more freedom in optimising the weld seam position to maximise the nesting. So, the material utilisation rate is increased from 74% for the reference part to 86% for the MPI H-Frame. 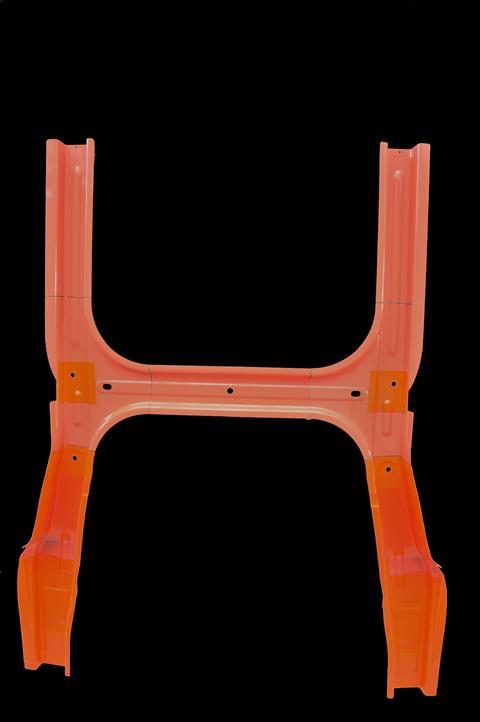 MPI H-Frame concept – savings in manufacturing
The H-Frame integrates 11 parts into one single part. This offers savings across logistics, stamping and welding operations. For example, 136 spot welds are saved. A collaboration with Bertrandt Engineering was set up to clearly identify the gains in the assembly lines. Results showed that capital expense is reduced by 29% in case of a new line, the lead time is reduced by 67% and the floor size required for the assembly operation is reduced by 44%.

Feasibility validation: from the R&D concept to the prototype
The MPI concept pushes the limits of manufacturing with the introduction of very large LWBs. Any possible technical limitations were assessed to ensure the feasibility of the concepts with the help of prototyping activities and partnership with key players in the hot stamping world. After discussions with tier ones and AP&T, one of the leading equipment manufacturers for hot stamping lines, we concluded that existing technology and some existing installations were already compatible without any further investment. Then came the question of the formability of such a large part using hot stamping. Based on the forming process, numerically designed and the formability assessment, a tool was designed to hot stamp H-Frame prototypes with our partner, the die maker SMP. The hot stamping operations were successful, and the numerical simulation was confirmed. The last critical step for hot stamping is the laser trimming of the part, and this was assessed on prototypes with an existing trimming machine from industry leader TRUMPF.

Collaboration with car manufacturers and deployment
The development of the MPI H-Frame is continuing in collaboration with Ford Europe and the CTAG – Automotive Technology Centre of Galicia, among other partners, in the framework of the ALMA* project ( ALMA - Advanced Light Materials - H2020 Project (almaproject.eu) ). This European Horizon 2020 project provides an excellent collaborative framework to increase the maturity of this solution and test new configurations with new PHS grades in development. ArcelorMittal designed the proposal and oversaw the formability analysis, the CTAG developed the model, and Ford Europe performed the CAE analysis. The H-Frame performance and its compatibility with the BEV BIW were confirmed and is one of the solutions to achieve the ambitious weight reduction targets of the project.

ArcelorMittal has also started several collaborations with other car manufacturers to introduce the MPI concept into their designs. Our H-Frame has recently been successfully prototyped in China by the car manufacturer Voyah. As well as the H-Frame, we can also note the success of the LWB door ring, which started a decade ago in North America with the Honda Acura MDX. ArcelorMittal is expanding and the MPI concept portfolio and numerous new opportunities will be available soon, stay tuned!

Watch the video of the H-Frame development in collaboration with Voyah: