Global suppliers need modularity and flexibility in the EV age

Electric vehicles bring with them high development costs and large expenses for retooling plants. To get around that, OEMs and tier suppliers must work together to develop flexible, modular production systems, according to panellists from ZF and ABB at last week’s AMS Livestream on electrification.

He added that for a powertrain specialist like ZF, most of the legacy equipment becomes outdated for EVs and completely new lines are needed. As a result, OEMs and Tier 1s are looking to enter into strategic partnerships to bundle R&D and industrial engineering capacities and spread costs.

The goal is to use a modular approach with a more flexible production line. Suppliers also need to think about modules during development, as it is increasingly the supplier’s role to develop and supply complete systems or modules, rather than simple components. This offers suppliers the opportunity to take over parts of the design tasks and responsibilities, and then optimise those for their needs, thus ending up with costs savings and a better product.

Modular, flexible production is also the next big step in production according to Tanja Vainio, managing director of robotics and discrete automation for automotive tier 1 business line at ABB. As most Tier 1s are global companies, Vainio thinks they will increasingly look towards modular production solutions that can easily and quickly scale up or down, located close to where the parts are needed. 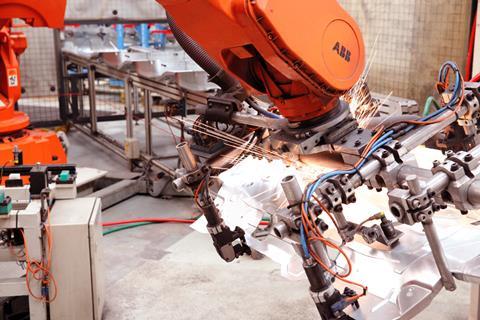 ABB views the ideal modular line as cellular, composed of modular application cells which are connected by AGVs and tied together using software for traceability and data collection and analysis. For such a modular set-up to reach its full potential, the whole plant needs to be set up for it. “The real benefits of flexibility are there when manufacturers have the courage to redesign the complete lineup,” she added. Of course, that is a challenge for existing plants.

The key point with flexible factory set-ups is that they should reduce overcapacity. Vainio said that too many production lines can still only make one component, which means that when volumes change, lines become inefficient. In other words, lines that can be easily repurposed decrease the risks associated with today’s volatile markets.

The culmination of such flexibility would be to move cells between production locations. “Once you have the cell-based manufacturing that starts with modular cells, you have the ability to what I would call ‘lift and shift’,” explained Vainio. ”So let’s say that you have a line in North America and another one in China, and you realise that you need to rebalance the capacity – take some of the capacity from North America and move it to China or the other way around, you can simply lift and shift a couple of the cells. They all have the same programme, the same user manual, the same interface, the same HMI. And I think these are the benefits that are extremely important in this very volatile world that we have today.” 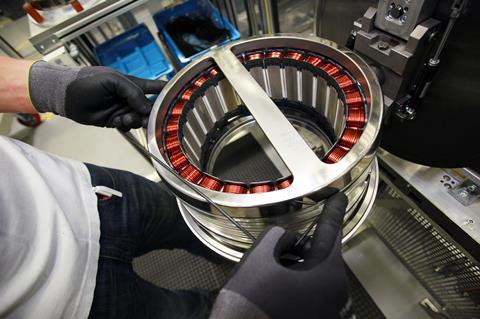 Even highly automated plants still need skilled workers, and the competences of the people are essential for building a successful global production network, says Tom Larsen, head of advanced technology and application of Gestamp’s chassis department. “It’s about people, really, and about skills and ability, and one of the things for me is the competence.”

“We’re very strong in Europe with [hydroforming], and we launched it in Mexico. Part of that process was to bring [the Mexican] team over to Europe, to train them for three months on. And then when they were going through the launch phases in Mexico, the European experts went across to support. I think that competence, and sharing that knowledge, is very important. We can get very sucked into technology and forget that there’s a lot of humans involved in this.” 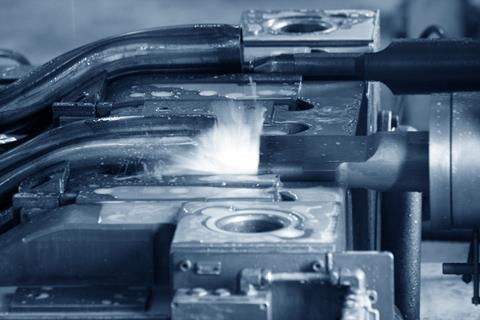 Henkel, too, is having to carefully manage its global footprint in the EV age. As a materials supplier, its role in the automotive industry has seen quite a change. Where it used to supply a few millilitres of material per car for electronic control units that had to withstand the heat of an engine bay, it now has to supply much larger quantities of conductive material that carries the heat away from batteries, but that doesn’t react with them. That means the material has to withstand chemicals rather than heat, and the volumes are much greater. What is more, electric cars have high-voltage systems, running 400V, or even 800V, which requires different materials from the 12V systems of traditional cars.

To come up with solutions, Henkel looked to its other business areas. “We take the advantage of our industrial part of the business here,” said Stephan Höfer, global market strategy head e-mobility at Henkel. “We are also working with the industrial applications for inverters, so we are used to high-voltage applications. Now it’s about translating that into the vehicle, so combining liquids with non-liquid materials, making sure that there is no way for a short.”

Meanwhile, the increased volumes means that production needs to move and be more local to the final assembly locations. As more battery production comes to Europe, Höfer says the OEMs are requesting their suppliers be close by their production sites. For Henkel in particular, it becomes impossible to ship the large quantities of materials needed around the globe, which results in a need for new manufacturing facilities and a more flexible supply chain.

ZF’s Arno Güllering WILL BE SPEAKING ABOUT transforming production for electrification at THE AMS AUTOMOTIVE EVOLUTION SUMMIT ON MAY 17-19, WHERE HE WILL BE JOINED BY EXPERTS FROM BMW, SCANIA, VOLVO CARS, GESTAMP AND OTHERS. REGISTER TO JOIN THE CONVERSATION