Volkswagen is investing in automation with robots from Fanuc and ABB at its Chattanooga, Emden and Hannover plants, in preparation for those factories to start producing electric vehicles based on the MEB platform. The robots are to be mainly used for body production and battery assembly.

Around 1,400 robots from Japanese manufacturer FANUC are headed to Chattanooga, Tennessee, and Emden in Lower Saxony, Germany. Both these factories are being converted to start producing the ID.4 electric SUV. 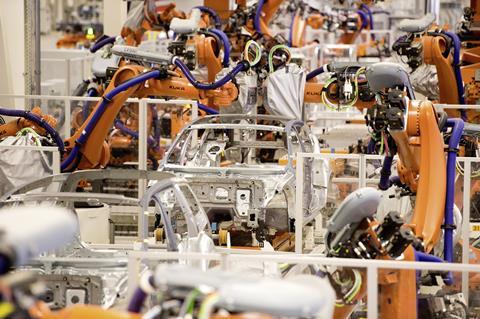 The Hannover plant, which builds the Transporter van, is getting an additional 800 robots made by ABB of Switzerland. Hannover will build a light commercial vehicle based on the MEB platform. This model has yet to be revealed, but will resemble the ID. BUZZ concept.

Josef Baumert, member of the board of management of VW Commercal Vehicles and responsible for production and logistics, said: “Our conversion work is proceeding entirely to schedule. With the launch of the ID. BUZZ, we will complete the modernisation of our Hannover plant currently in progress, which will also benefit all the other models produced at this location.”

VW is investing heavily in the launch of its electric models. Zwickau was the first production location to start producing the ID. 3 hatchback. It has been converted to exclusively produce EVs based on the VW Group’s MEB platform. VW says it plans to invest €33 billion ($38 billion) by 2024 “with a view to becoming the world market leader in e-mobility”.

The SAIC Volkswagen plant in Shanghai, which builds the ID.4 for the Chinese market, was equipped with 300 robots from ABB.