When cars built for speed have their brake pedals depressed it is highly likely that the calipers that actuate the brakes have been made by AP Racing. Based in Coventry, UK, and part of the wider Italian-owned Brembo Group, the firm employs around 200 people in the design and manufacture of high-performance brake parts for three distinct market segments across the globe: OEM carmakers, including Caterham and Lotus; racing teams; and off-the-shelf distributors for replacement parts and upgrades.

Until the middle of 2019 the manufacturing involved was carried out on a largely manual assembly facility unsupported by modern IT capabilities. As head of operations Charlotte Barker explains, it comprised 20 cells producing 16 different part families including brakes, clutches, calipers, pedal boxes, balance bars, drive bars and master cylinders – in short “a whole range of braking and friction products”. That existing installation was then joined in an adjacent building by a completely new one specifically for calipers, comprising seven semi-automated assembly stations combined with an adjacent parts storage ‘supermarket’ in which state-of-the-art information systems support what for the company were previously unattainable levels of process speed and assembly reliability.

They do so by ensuring the delivery to the line of the right parts at the right time and then by guiding and monitoring operations so that there is no possibility of incorrectly assembled units proceeding up the line to create subsequent rework or rejection.

In the first case, this is achieved through the operation of the ‘supermarket’ from which parts are retrieved and then loaded onto trolleys manually but according to precise guidance before being pushed into place at the appropriate assembly station. In the second, the crucial enabling factor is the implementation of a ‘pick-to-light’ system that not only ensures the correct parts for a particular assembly are fitted to it, but also determines whether the assembly can proceed to the next station. In short, the new line brings the company for the first time into the realm of industry 4.0 operations. 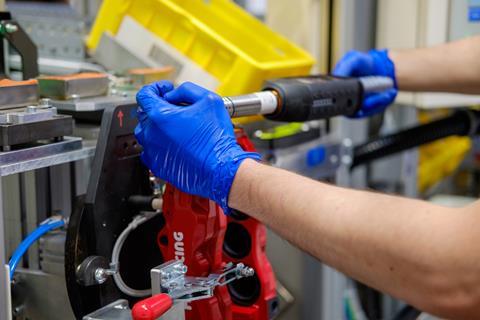 AP Racing employs around 200 people in the design and manufacture of high-performance brake parts, supplying OEM, racing teams and aftermarket

Running in the family

Barker explains that a number of factors compelled AP Racing to take the new smart factory route, but everything ultimately stems from the variegated nature of the company’s products and customer base. In turn, this means the new installation had to be capable of meeting a challenging mix of quantitative and qualitative demands. “The fundamental aim of the project was to produce a semi-automated line able to produce 13 ‘part families’ comprising 197 individual part numbers at a rate of one part every four minutes with 100% traceability of build data and fully integrated quality control,” she states.

The new installation, though, does not replace the older line. Instead, says Barker, it enhances AP Racing’s capabilities in a number of crucial respects. The most immediately tangible is the increase in output capacity it provides. “We can get an extra 1,000 calipers a week out of the new line,” she confirms. Once the line kicked in, she reports, that immediately boosted output from the whole Coventry site to around “23,000 units a month split roughly equally across all three market sectors.”

More fundamentally the new line equipped AP Racing to meet increasingly stringent demands from some of its existing and projected future customers in the areas of product quality and consistency. On that account, Barker says, the purpose of new line and arguably its most fundamental attribute is “to produce a facility that can provide customers with the standards and levels they require.”

In practice, she says, that means that previous disparities required by different customers between levels of, for instance, traceability of individual products back though their manufacturing process are now no longer in force. On the new line, she confirms, every single assembly has a unique data matrix code laser etched onto it at the first station.

This is particularly the case, Barker says, for customers for racing products which now require exactly the same levels of verifiable product quality and consistency as more mainstream counterparts. “Previously the manufacture of racing products has been manual but lot of racing customers now want OEM standards,” she confirms.

This is precisely what the new line provides. “In technical terms the new facility provides one-by-one batch control,” Barker explains. “In contrast, in the old facility we could only control to batch level but not by part.” Moreover, on the new line the recording of data at part level is also now exhaustive. “In the new facility we can record every item of data that goes with every part, for instance every torque reading,” she states. As she also confirms, this level of checking is maintained from start to finish so that at “every station there is no fault forward” with the new pick-to-light system is a key enabling factor (see beow, See the light). 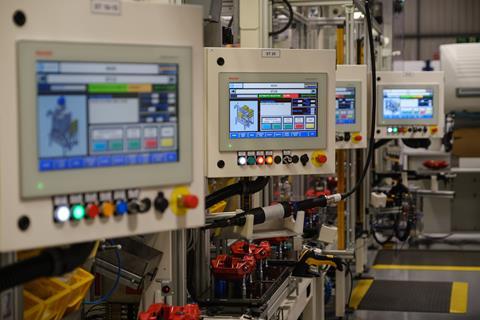 The new €1m line brings AP Racing into the realm of Industry 4.0 operations

Satisfying market demand remains the company’s guiding principle and, as Barker confirms, is what has driven the project for the new assembly line. “Because we supply three different markets those markets demand different solutions,” she states. “Though one type of production system could suffice previously growth in volumes over past five years means that we now need different approaches to keep satisfying those markets economically.”

The new line means, Barker says, that “we can do things more consistently but also with greater speed.” On that latter point, she explains: “we can now assemble in about a third of the previous time because of the way parts are presented to enable the best possible build-sequence.” The key factors are, she says, “logistics, materials handling and line balancing rather than assembly techniques.”

In fact, Barker adds, the new line will have repercussions not just for the way AP Racing makes its products but also for the way it designs them. “We will never compromise on quality for the customer but we will look to explore how the new line increases the applicability of design-for-manufacture,” she states. “It could influence geometries to increase standardisation of parts such as seals that can be quite difficult to tell apart and of force-of-fit for items such as pins.”

The total investment in the new line was €1.275m ($1.41m), an outlay already due for repetition since another assembly facility built to the same level of capability is scheduled to go into operation at Coventry in early 2021. The facility could influence how manufacturing is carried out elsewhere as well. As Barker confirms: “Part of the specification was to come up with a solution that would be repeatable elsewhere in the Brembo Group.”

AP Racing’s Charlotte Barker explains that the ‘pick-to-light’ system that guides the stocking of the supermarket, getting parts to the line and their selection by operators as a key aspect of the improvements. There are 134 storage locations in the ‘supermarket’ and when the assembly task for a particular product is scanned into the system it will signal to a human operator which parts are to be selected and where on the line the parts are to be delivered. It is new not just to the Coventry operation but to the wider Brembo Group.

The whole concept was, though, developed by AP Racing in close cooperation with Brembo and Italian company Gefit that supplied the completed system. Barker adds that this methodology came about as a way of dealing with the specific demands the line would make. “Because of the high variation on the line we didn’t want to be continually pushing and pulling boxes into and out of racks,” she states.