Switching from gantry line to a fleet of AGVs, an IAC facility near Liverpool has brought swift and smart adaptability to its instrument panel assembly process 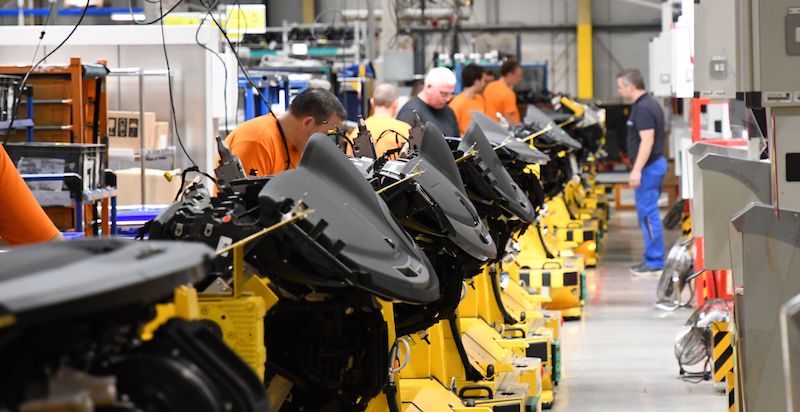 Specialists in interior components, IAC operates in all automotive manufacturing markets around the globe. But it was its production lines at Halewood in Merseyside, delivering interior components to the adjacent JLR factory, which is piloting IAC’s newest industry 4.0 approaches. Assembling instrument panel modules for the Range Rover Evoque and Land Rover Discovery Sport, the plant’s proximity and sequencing means that each module can be married to its target vehicle within three hours of leaving the assembly line. It now features 42 automated guided vehicles forming a flexible, JIT, cockpit line – a valuable upgrade on the former fixed, steel gantry carousel – equipped to deliver the mind-boggling 4 million cockpit variants for the Evoque and Discovery Sport.

As the president of IAC Europe Jonas Nilsson explains, the new versatility is vital when meeting the demands of OEMs, particularly in the premium segment which prides itself on breadth of customisation options.

“Product cycles went from ten years to maybe six, seven years now – but there’s also a mid-life update, there’s a facelift and many new technologies that OEMs want to get in right away.”

With Halewood’s previous static steel line Halewood it could take three to six months to apply changes, Nilsson adds: “We had to wait for a summer break or a winter shutdown to do it. Now it will take just a weekend.”

IAC sees Halewood as a pilot location to test out its other new industry 4.0 and smart factory processes. The switch to an AGV-based assembly line is a key jump-off point.

Plant manager Trevor Warner described the cautious approach to the transition from its beginnings back in late 2017: “The factory floor area was empty, cleared out ready to start the installation. We had the [assembly workers] in here for the first briefing. While we didn’t have a unit to show them, before they went off for Christmas I wanted it firmly in their minds that the world was going to be different. We had some videos to show and gave a briefing about the behavioural matters, the data systems and how it was not just a new manufacturing line, it was a whole concept we were going through.”

Warner’s priority was to keep communicating with his team of assembly line operators all through the process, so that they fully understood what was coming in 2018. The installation took place over Christmas 2017 and, from the early rehearsal runs, production ramped up to operational speed over the first six months of 2018. With the Evoque replacement scheduled for production in late 2018, Warner was determined that they weren’t dealing with two introductions in tandem.

“We would not launch a new product on a new line. That way lies despair, it’s horrible. With large capital projects, we have to be assertive on timing. There are plenty of bugs to knock out putting a current model on. Once you’ve done that, putting a new one on, well, that’s like falling off a log. Easy.”

Preparing the ground for the very first new generation Evoque, Warner says, was the motivation to keep the transition on track. Should IAC need to make the line longer or shorter, the task comes so much easier than the old steel gantry.“The old line was gantry mounted with fixed tooling. We’ve actually made it bigger than the previous one so we can put people in and take them out – the whole thing’s a lot more flexible,” Warner explains.

Recalling the early stages, Warner says IAC had a 27-point plan and performed a market survey to benchmark the different kinds of AGVs on the market and ascertain the best in class: “Since we were effectively building a new factory, we took the opportunity to examine every aspect of the business. So all of our logistics were upgraded, all our torque and angle control were upgraded as was our sequencing data from Land Rover. We also did a lot of work with people on behaviour, housekeeping, leadership skills – a whole programme.”

The close proximity of the JLR plant, literally just the thickness of a wall away, allows IAC to respond in real time with the journey of a new vehicle in progress.

Warner says: “We do the Evoque and the Discovery Sport in sequence exactly as the body is going down the trim and final line. So, at Land Rover, which is just the other side of the back wall, they stamp the bodies, spray them in the paintshop, and send them to what we call the “tower”. As the body drops from the tower onto the start of the trim and final line, we get a data signal at exactly the same time.”

When the data signal from the tower is the received, it comprises the entire specification for the vehicle. This “birth certification” is attached to the AGV in turn, confirming the instrument panel, the colour, the hand (ie, left or right-hand drive arrangement) as well as the radio, the satnav and Hvac option.

“It also tells us the tyres, the brakes, the shocks, the doors,” Warner says, “So we strip out all the stuff we don’t want, because while it’s interesting to know that it’s going to Russia, for example, or that it’s got all-wheel drive tyres on it, we’re not going to do anything with that information.” 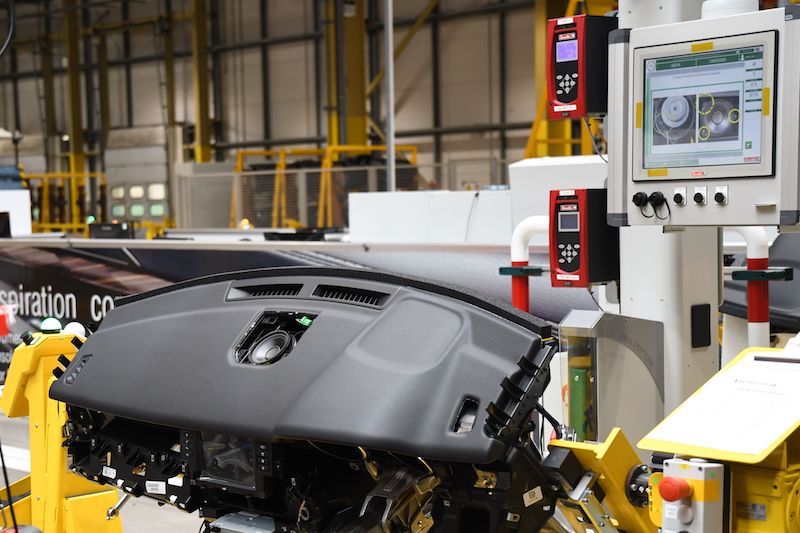 One key factor addressed in the new arrangement was the physical set up from the assembly operators’ point of view, how they interact with the console on the AGV itself.Warner says: “We did an awful lot of work with the ergonomics. The height and the distance are similar to what we had before but we actually had an AGV cell set up here long before the line was up and running. We had all the people through to check the height and the reach. As you know, there’s plenty of ISO guidelines on maximum reach and working envelopes, so we did a lot of work to fine tune that.”

Towards the end of the line, electrical testing takes place and it was at these stations that more key ergonomic changes were made. The test connector cables are now arranged in a drawer effect, the idea being that the tester can pull a drawer out and snap them all in from the top, all at waist height.

“Before we had to get each one out, and put that in. As the vehicle gets more and more sophisticated, there’s so much more electronics in the instrument panel, there’s more connections to be made. So this a huge upgrade on the electrical test and you can see we’ve got two electrical testers. This is a huge upgrade on the previous line.”It’s parallel testing, which helps not only with capacity but also the reliability of testing. Warner says a lot of time was spent getting the sequencing right at the test point: “That was a big thing in the commissioning. We’ve got what we call SIP, standardised inspection process but [the tester] has all his inspection sheets on two big screens running throughout. If he finds something, he programs it there for the repair lads. So you kind of see what success looks like, because you’re guaranteed your quality all the way round and in your build-up rather than end of line.”

Improvements aside, Warner wants the new set up to retain the positives: “From the operator’s point of view, as little as possible changed. The number of people we had [previously], is the same as the number of people here. Let’s get it in, make it successful, look after Jaguar Land Rover, keep the quality up, that’s the way we’re following it.”