The application of AI

One company where the concept of artificial intelligence (AI) is not futuristic or speculative, but a key element in real manufacturing development and application projects is Audi. 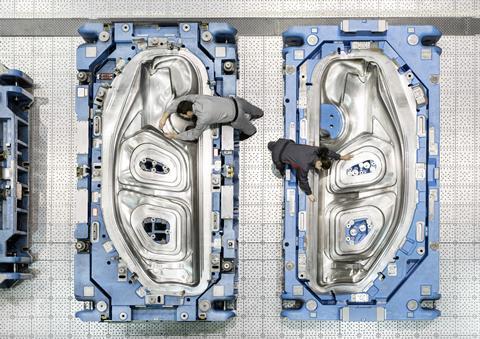 For the last couple of years, the company’s site in Neckarsulm, southwest Germany, has been the location for a pilot project intended to explore the potential for using AI to help control the quality of the 5,300 spot welds in the body of an Audi A6.

Previously the process involved random sampling through the manual application of ultrasound scanning. But in the new set-up an AI algorithm is used to enable near 100% checking of weld quality by providing guidance for a human inspector using a lineside display screen. That basic methodology is confirmed by Mathias Mayer, an AI implementation specialist at the site. “The front end has barely changed,” he states. “The artificial intelligence now tells the inspector the information they need to check, but the user interface is still crucial for visualising the AI results.”

Mayer further explains that the raw data which is gathered by the welding robots is “very complex” and difficult to process using conventional methods. “We use around 200 variables from the welding process,” he explains. “Each weld takes around 400 to 1,000 milliseconds to complete, and each is measured.” The data is not processed locally, though, but is instead processed in the Amazon Web Services (AWS) Cloud before being displayed for the human operator to check. 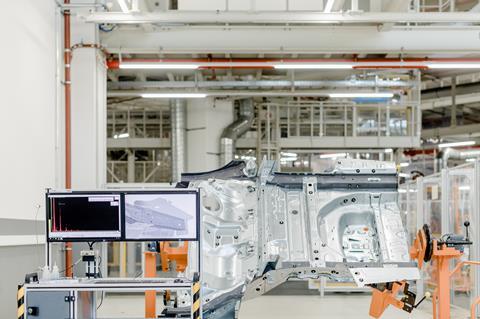 Moving into volume production
At this initial level as an application-specific support tool, Audi is entirely satisfied with the results so far and is now proceeding to full implementation. “The project has been up and running for two years and will now continue in volume production,” confirms Mayer. But over the longer term the goal is, he says, to “fully automate the quality control loops,” so that in the future it may become possible “automatically to adjust the welding process to eliminate any significant deviations.”

But the company’s vision for the use of AI in production processes is much broader, as Michael Haeffner, head of delivery management digitalisation for production and logistics at the site, confirms. He says that the project at Neckarsulm was aimed as much at proving out the viability of AI as a generic support capability as well for the application involved. “Welding is a highly standardised technology that is used extensively in the Volkswagen group, and we chose it specifically to create a platform standard and an Industry 4.0 platform,” he states. “We have now managed to do that so other production processes such as screw technology, riveting and bonding can be fine-tuned via this platform.”

Neckarsulm is a lead location for the development of AI applications throughout the whole VW group. “As a pilot plant for digital production and logistics in the Volkswagen group our goal is to test and develop digital solutions for vehicle manufacturing right through to their use in series production,” confirms Haeffner. “With the use of AI in this project we are testing an important key technology that will make Audi and the location fit for the future.”

The company itself believes that AI can support enhanced production operations in a number of defined contexts. It cites:

• Obviating the need for manual configuration of new components – a capability enhanced by the fact that the sensors used with AI are far simpler than with conventional approaches and that much of the complexity is mapped in software, which is cheaper to scale than hardware.

• The ability of AI-enhanced solutions to check several thousand parts every second when running on appropriately powerful hardware.

• The algorithms generalise more reliably and so when used, for example, in vision-based applications can cope more easily with different light conditions or camera types.

• The ability of AI-enhanced systems to ‘learn’ from training examples so that they are not static solutions but ones that are constantly improving.

Sharing across the industrial cloud
Cloud computing, moreover, serves not just to provide processing power for AI applications but also to disseminate them throughout the company once they have been developed and proven out. Indeed, the project at Neckarsulm is part of Volkswagen’s Industrial Cloud, which it describes as bringing together production data from the Group’s factories around the world into a single digital platform. It is confident that the ability to combine data from all plants will open up new possibilities for further improving the efficiency and flexibility of production across all its locations.

In addition, each connected site can download applications for its machines, tools and systems directly from the company’s Industrial Cloud in what it describes as “app store approach”. Apart from AWS the other external partner in the operation of this corporate cloud implementation is Siemens. Volkswagen says that AWS contributes expertise in machine learning and cloud computing services, while Siemens effects the integration of production systems, machines and installations of various manufacturers in the global plants.

In fact, another AI-enhanced welding application has also been implemented elsewhere in the Volkswagen Group in this case at its plant in Emden up in the northwest of the country. It says this utilises spot welding analytics to provide greater transparency and efficiency in the body shop by integrating and analysing data generated by welding robots, which is described as a “hitherto unused potential of production data”. The company stresses that the algorithm at the Volkswagen Emden site analyses but does not control the processes. Instead process changes are displayed and then checked. 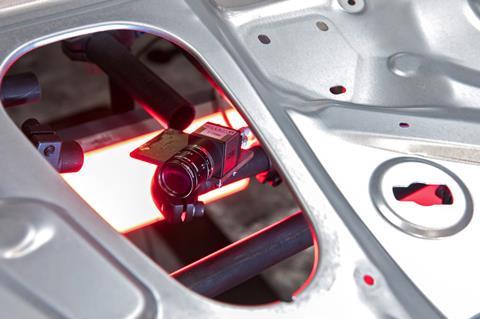 AI application at Ingolstadt
Meanwhile another Audi site that has been the location for a project to develop an AI-enhanced manufacturing process is Ingolstadt in Bavaria. In this case the application has involved the creation of an image recognition capability to detect cracks in sheet metal parts. The project which got underway over three years ago specifically aimed to upgrade an existing image recognition system using cameras installed in the presses used to make the parts.

The details are confirmed by Johannes Schniertshauer, a specialist within Audi’s data engineering and data products development team. He says that the application involved had several characteristics that made it suitable for the use of AI. “There is a high frequency of parts to be inspected and inspection is therefore a recurring task,” he states. “There is also a clear definition of what needs to be detected, in this case very fine cracks.”

The hardware involved is a mix of old and new. The actual image detection technology, for instance, remains unchanged. “We use regular industrial cameras to make photos of the crucial areas of the parts,” says Schniertshauer. “Those images are used to train our algorithms and are also used in real-time to determine if a part is damaged.” Compared with previous practice, though, more intensive computing power is required. “The application requires dedicated hardware to accelerate the performance of deep neural networks,” Schniertshauer explains. “In order to ensure the reliability of the solution and low latencies the computation is run in our local data centre.”

The application took approximately two years to develop, a large part of which was the time required to compile the dataset needed to train the algorithms. “Since we have a very high quality in production the collection of defective samples took quite some time,” explains Schniertshauer. He adds that other findings were that the data collection needs to be highly automated, and that successful implementation of AI-based computer vision solutions requires a unified platform to scale such solutions according to requirements. This has led to the creation of a Volkswagen Vision Workbench platform. The most crucial requirement, though, was a “qualitative training-dataset”, which necessitated “close collaboration with our domain-experts”.

Developing a self-improving system
But the project was so successful that Schniertshauer can report not just that “the solution is running in the Ingolstadt press shop” but also that “we plan to roll it out in Neckarsulm later this year.” As he explains “the system can be used to inspect deep-drawn parts on every vehicle produced in the press shops in both plants.” Moreover, its operation has brought identifiable benefits. “Less effort is needed to configure a solution when new parts are being produced as deep neural networks can generalise,” Schniertshauer states. “In addition, the performance of the system is now more robust since the algorithms are still reliable if there are changes to conditions such as new part positions, lighting or background.” Furthermore, the solution is, in effect, self-improving. “The increasingly growing dataset used to train the solution makes it more reliable over time,” he explains.

Schniertshauer adds that the new capability was developed without the aid of any external parties. “The whole application was developed internally by Volkswagen colleagues at the SDC:Dresden, machine learning engineers at Audi IT and developers from the manufacturing departments,” he reports. Nor does the day-to-day operation of the system in the press shop require any new skills on the part of the people who work there and interact with it. “That was a core requirement,” he states emphatically. As such Audi feels able to describe its pace of development in AI applications as “blistering” confirming that it is already working on using smart algorithms to optimise processes and products “in all business divisions in the future”.