Maintenance teams at the Ingolstadt factory have a new app on test, developed an inhouse to provide live updates from across the assembly process direct to their smartphones 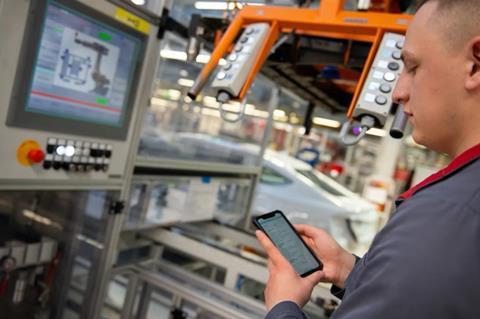 Maintenance teams at the Ingolstadt factory are testing out ‘Audi Mobile Maintenance App’, developed inhouse to give live updates from assembly line performance

The application of Industry 4.0 in the area of shopfloor communications has proved particularly successful, enabling personnel to react quickly to developing situations in the production environment. 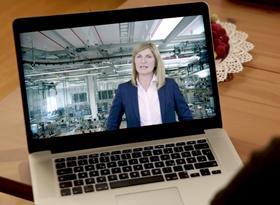 One example of this is at Audi’s Ingolstadt factory in southern Germany, where 150 maintenance staff have been testing out an ‘Audi Mobile Maintenance App’ that updates them automatically with information about defects as they occur by means of text messages to standard smartphones.

The details of the initiative are confirmed by Matthias Herold, project manager for the maintenance app. “All systems in the assembly shops at our plants are connected centrally in the internal operating data acquisition system in production,” he states.

“These systems include materials handling equipment, such as skillet conveyors, lifting devices and various types of assembly systems, for example filling systems or mounting systems. Essentially, every system that is connected to the operating data acquisition system can be integrated.”

As Herold further explains the system utilises existing IT infrastructure. “The fault text messages are generated by the equipment and collected, filtered and processed by the internal operating data acquisition system,” he explains.

“They are then forwarded to an SAP cloud push system, which prioritises the relevant fault messages. The communication flow of the messages starts in the system and continues via the operating data acquisition system and the SAP push function before it finally reaches the maintenance staff’s smartphones via the mobile network.”

With  faster disturbance data analysis, fault repair on the systems and the fact that the malfunction is documented, Audi  expects shorter downtimes

Herold stresses that no extra sensoring is required at the equipment itself. “No technical adaptations of those systems were necessary,” he confirms. He adds that the system does not just report breakdowns but can also alert staff to situations in which equipment though continuing to operate is approaching a fault state.

“Both types of fault messages can be forwarded depending on the default setting in the operating data acquisition system.”

Herold notes that though the system, developed by a multidisciplinary team from both the assembly area and IT, is still effectively under test it has already proved its worth and its use will be extended. “The system is productive in the assembly area and we are continuing to integrate adaptations,”

Moreover, the effectiveness of the app is cumulative. “Due to faster disturbance data analysis, fault repair on the systems and the fact that the malfunction is documented, we are expecting even shorter downtimes in the future,” says Herold.

A virtual tour of Ingolstadt

Like all Volkswagen Group production sites, the Ingolstadt factory suspended operations during March/April 2020 under the coronavirus measures. However, Audi is offering an online interactive tour of the plant, the largest factory in Audi’s worldwide network.

The tour highlights the variety of modern production technologies, systems and solutions employed on in A3 bodyshop and the A4 assembly line. Hosted through its new AudiStream service, users can connect with anexperienced tour guide and put questions over a live interactive discussion or online chat.

Audi Ingolstadt has been manufacturing vehicles for more than 70 years. In 2019, it produced more than 441,608 cars.