Volkswagen electric vehicles - the next chapter

Factories that make vehicles with internal combustion engines could soon be making electric vehicles. Volkswagen has already started the transition at one of its plants. Michael Nash investigates

Volkswagen has been keen to make amends since the emissions scandal broke in 2015. As well as paying huge settlement fees, the company has promised to champion the push to electrified vehicles.

It has since made numerous announcements regarding new electric model launches, EV sales predictions, and production plans. Here is the latest from the plants.

To coincide with its world premiere at the 2019 Frankfurt Motor Show, VW has announced that the ID.3 will start production at its Zwickau plant in November. The company has stated that final preparations at the factory are well underway, with the last robots being installed and the assembly line being commissioned.

This is big news, according to Thomas Ulbrich, member of the board of mamagement at VW and responsible for e-mobility: ”The production start of the ID.3 in November will usher in an entirely new era for Volkswagen – comparable with the first Beetle or the first Golf. Our conversion work is proceeding entirely to schedule. The first 400 pre-series ID.3 vehicles are already on test routes throughout Europe. With the ID.3, Zwickau will become a genuine pioneer of e-mobility.” 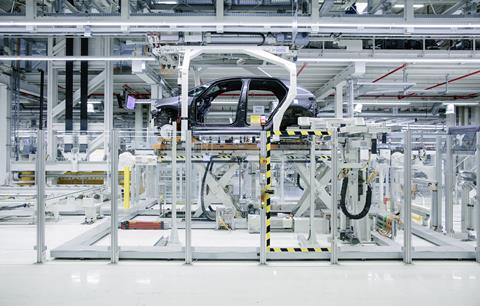 The Zwickau factory will be the first in the VW Group’s production network to convert from solely making internal combustion engines to solely making electric vehicles. The changeover is expected to be completed in 2020. A new report from the Ultima Media business intelligence team examines the challenges facing OEMs when it comes to re-tooling factories in order to ready for EV production.

A total of 12 new buildings or parts of buildings are currently under construction at the site in order to enable the transition. €75m (US$82.65m) was spent on the press shop alone. Both the body shop and paint shop have been prepared, as has one of the assembly lines. The second assembly line will be modified in summer of 2020.

Investment to date for the preparation of electric vehicle production at Zwickau has reached €800m, and is expected to hit €1.2 billion by 2021. Production capacity will be boosted from 300,000 to 330,000 units per year, making Zwickau the largest EV plant in Europe. 150 cars will roll off the lines every day.

The ID.3 is the first model that will be based on VW’s Modular Electric Drive (MEB) platform. VW Group intends to start production of 33 models based on the platform over the next three years, six of which will be made at Zwickau.

While assembly and production of the vehicle itself will take place at Zwickau, the battery used in the ID.3 and other models based on the MEB platform will come from elsewhere. VW was previously working with LG Chem and CATL, but the latest media reports have suggested that these partnerships could be coming to an end.

However, VW has recently signed an agreement with Northvolt - a Swedish company founded in 2016 with plans to build a gigafactory to produce EV batteries. The 50/50 joint venture will result in the construction of a factory for lithium-ion batteries, which is slated to start in 2020 in Salzgitter, Germany. Operation is expected to start in late 2023, or early 2024, so VW will source its batteries elsewhere until then.

VW is reportedly investing an initial sum of €900m in the project, some of which will be spent on the new factory while the rest has been put into Northvolt shares.

”The battery cell is the key component for electric mobility,” commented Stefan Sommer, member of the VW board of management responsible for procurement, and member of the supervisory board of Northvolt. ”Therefore, Volkswagen and Northvolt are together pushing ahead efficient cell production in Europe to accelerate their joint battery activities. With the founding of the joint venture and the planned construction of a battery cell factory in Salzgitter, we are making a decisive contribution to establishing the core battery cell technology in Germany as well.”

The transition at Zwickau and construction of the battery production facility are key starting points for the VW Group in its journey to becoming a leader in e-mobility. It hopes to launch 70 new electrified models over the next ten years, and is spending a total of €30 billion to do so. These early steps will likely be crucial in establishing the foundation for a wholesale transition to e-mobility, acting as a blueprint for the Group to rollout across its global production network.