The road to recovery for the Big Three

Orion Lake, north of Detroit, is to build the Buick Verano, which shares much with the Opel/Vauxhall Astra. And Chrysler saviour Fiat resurrected the idled Jeep plant of Belvidere, Illinois with a $600 million investment in 2010 that included a new body shop to build the new Dodge Dart, a C-segment car based on Alfa Romeo architecture.

“Historically, America stood as a bit of a regional oasis,” says Jackson. “What is happening now is the investment across all OEMs has dramatically improved the competitive position of the industry and the manufacturing footprint in North America.”

Endemic factory overcapacity prior to the crash was masked by loss-making discounts that meant vehicle prices barely changed between 2001-2008, according to a report by the Michigan-based Center for Automotive Research (CAR) published in January this year. Unionised workers were kept busy because the costs to lay them off “were no different than their costs when working” the CAR report said.

The bankruptcies at GM and Chrysler, as well the rewriting of labour contracts with the United Auto Workers union, resulted in the elimination of $80 billion of fixed obligations, according to the CAR report. CAR calculates this has cut GM’s cost for hourly labour from $79 in 2006 to $56 in 2011. Chrysler’s cost of $52 per hour is lower than the $55 it estimates for Toyota.

It’s still not as good as those makers who build in the non-unionised southern states, for example Nissan at $47 per hour and VW at $38, but a lot better than before. The union agreements “helped provide certainty” to the US manufacturers, according to Jackson.

During the crisis, GM killed off its Saturn and Pontiac brands and between them the Big Three shuttered 16 plants. Many were making the vast body-on-frame SUVs that dramatically fell out of fashion after petrol prices soared.

But leaner operations and the reduced workforce has helped to dramatically improve the money the firms make on each vehicle, rising from a loss of $3,229 on average in 2009 to a profit of $2,224 in the first nine months of 2012, according to CAR figures. In 2010, profit on vehicles sold by the Big Three unprecedentedly moved ahead of Toyota and Honda.

From making a combined loss of $17.6 billion in 2006, the native US firms are back in profit and as demand in the first seven months of 2013 rose to levels last seen in 2007, Ford, Chrysler and GM were once again increasing capacity – only this time without the massive capital expenditure.

“We’re seeing a lot more production from far fewer assembly facilities,” says Ron Harbour, author the Harbour Report, which scrutinises plant productivity. “In some they’ve just added shifts or overtime. There’s a lot more flexibility in that model.” According to Harbour, around 40% of North American factories are running three shifts. “We’re still looking at how we get more out of every plant and that’ll be a focus for as long as the demand is as strong as it is,” Jim Tetreault, Ford’s vice-president of North American manufacturing, told Bloomberg in August.

Within the last year, Ford has announced it wants to increase capacity by 600,000 in North America and in August it said it had reached 75% of its goal to add 12,000 hourly jobs in the US by 2015. Most recently it added a third shift to its Claycomo plant in Kansas City to increase production of the ever-popular F-150 pickup. The facility will also make Ford’s global light commercial vehicle the Transit from next year after a $1.1 billion investment.

Chrysler too is stretched but not yet to the point it will build new factories. “We’re looking at [increasing] assembly capacity without buying a lot of hardware,” Scott Garberding, vice-president of manufacturing told the Detroit Free Press in August. “If it looks to us like we’ve got demand we can’t meet, we’ll look at bigger-picture options.” Making best use of the factories means thinking cleverly.

Ford said last year that with each major new plant update, it would increase the flexibility of the equipment to build multiple vehicles. Globally, by 2015 Ford aims to be able to produce 25% more derivatives per plant than in 2011. That’s already happened at Michigan, dubbed its “most flexible” plant, where it builds the Focus on the same line as the C-Max hybrid and plug-in hybrid minivans – cars that share the same platform. In the body shop 80% of the robots can be programmed to build a range of vehicles.

It’s become technically a lot easier to squeeze more production thanks to the increased reliability of robots, says Harbour. The three US manufacturers have learnt a great deal too. “If you’re run three shifts, but you have so much downtime that you’ll net the same amount as you would have done with higher uptime on two shifts, then it’s not worth it,” he says. Getting the balance right has resulted in a much higher work rate per employee. According to the CAR report, productivity was at 12.7 vehicles built for every US automotive job in 2007, falling to 10.0 in 2009. Last year it had reached 14.9.

Despite the profits (Ford made $2.3 billion in North America in the first six months of 2013, GM made $2 billion in the region during the second quarter alone) makers are still looking to make efficiency savings.

In August, GM’s vice-president of global purchasing and supply, Grace Lieblein, said the firm wanted to cut $1 billion from material and logistics costs in North America by 2016. Plans included adding stamping facilities to plants that don’t have them and bring railheads closer to plants.

Some GM savings were more thrift-store-smart – when production of heavy-duty pickup trucks was to be switched from the closing Pontiac, Michigan, plant to Fort Wayne in Indiana, it was quickly realised the pickups with extended cabs and 8ft beds (boxes) wouldn’t fit through the paintshop.

In what became known as the ‘box swap’, the beds were switched with the shorter 6ft beds on a regular cab, painted and switched back later. GM reckoned this clever trick, monitored by a sophisticated computer to ensure accurate pairings, costs $4m instead of the $40m a paint shop upgrade would cost.

“In what used to be a situation where they would pretty readily expand with bricks and mortar, they’re now looking for something more sustainable,” says Jackson.

One important point however, is that no factory from the Big Three has yet to reach the scale of the foreign manufacturers’. Of the 25 biggest plants by vehicle output in North America for the first half of 2013, the top seven were operated by either Asian or European firms. Ford’s three shift Louisville, Kentucky, plant in eighth place boasted the biggest output of the three at 198,780, thanks to production of the new Escape compact crossover. The Fort Wayne pickup plant, in 15th place, claimed GM’s biggest output at 177,006, with Chrysler’s best being Belvidere in 18th with 166,685. Top was VW’s Puebla, Mexico plant at a whopping 292,749 for the half-year, just ahead of Toyota’s Georgetown, Kentucky, facility. 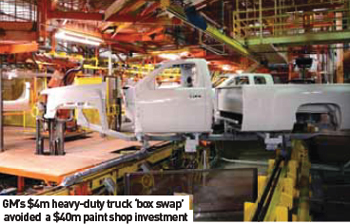 Only six of the top 25 plants showed a decline on the previous year, helped in many cases not just by an increase in domestic demand but by exports; an important upside to the increasing global outlook is the opportunity to sell of cars outside of North America, cars that now chime with the rest of the world’s needs.

According to figures from the US Department of Commerce, exports to countries outside the North America Free Trade Agreement have nearly tripled since 2009, rising from 375,676 units to just over a million last year. The value has nearly doubled to reach $51 billion last year.

North America is in a great position to grow that further, says Jackson. “Now much of the investment [in plant updates] has been made, with greater globalisation in the industry as a whole, North America production is actually far better suited to meet demand in growing markets around the world than it has been in the past,” he says.

Ironically it’s the global growth in SUVs that’s helping this, according to Jackson. The product that was instrumental in forcing the US makers to their knees in the first place is now lifting them up again, except it’s now is more to do with fuel-efficient crossovers such as the Ford Escape. In a report published in July entitled Trends in US Vehicle Exports, the Department of Commerce said the US was “well placed” to exploit the global increase for SUVs.

This is straight from the BMW and Mercedes playbook, whose SUV-only only plants in the southern states helped them through the 2009 crisis by exporting much of their output, says Jackson. BMW claims its Spartanburg, South Carolina, plant exports the most vehicles of any US facility. The downside to the increased global outlook is the effect on local parts suppliers. As you’d expect, local content is down on cars that have become less homegrown, according to a 2013 report issued by the National Highway Traffic Safety Administration as part of American Automobile Labeling Act (AALA). Only 40% of parts by value for the new Ford Focus are sourced in the US or Canada, compared to 65% for the old Focus. Dodge local content goes as high as 80%, but for the Alfa-Romeo-linked Dart it’s at 57%, demonstrating Chrysler’s stated wish to share two-thirds of its suppliers with Fiat by next year. It’s same with the Opel/ Vauxhall-related Buick Verano at 56%. The US-built Honda Civic by contrast runs at 65%.

“It is clear that the US automotive parts industry has been shrinking fast in the past decade”, says the CAR report, which notes that imported parts per vehicle has tripled from $4,114 in 1995 to $12,764 in 2011, while the average retailer price for new cars has only increased from $20,450 to $30,659 in that timeframe.

Also not sharing in the boomtime is production in Canada. Mexico overtook it for output in 2008 and of the six top 25 plants to show a decline for the first half of the year, three were in Ontario, where Canada’s plants are based.

According to Harbour, the US’s northerly neighbour has been a victim of its own economic success. “Canada didn’t have a banking crisis and its economy is growing because of new found oil,” he says. “The Canadian dollar is very strong, the downside of which is that it makes it much more expensive to build there, so people are pulling production out of there, up to a point.” That said, based on 2012 figures Canada is the ninth largest vehicle producer in the world, ahead of France, Spain and Russia.

While the Big Three might have a battle making Canada cost-effective, it’s a small concern compared the bloody war they have successfully fought. “The downturn forced a lot of difficult decisions, but it also opened up opportunity and required significant investment,” says Jackson. “What has happened is that the industry as a whole is far more competitive and far more globally aligned than at any other point in its history.”