The pulling power of GAZ and Komatsu

AMS takes a look inside the OEMs' heavy-vehicle production sites at Yaroslavl, Russia, and Awazu, Japan 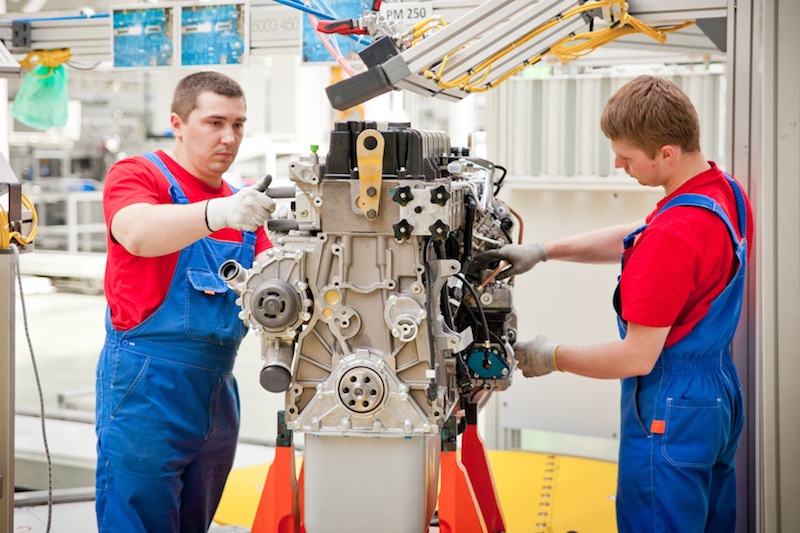 Since early 2013, Russian heavy-vehicle manufacturer GAZ has been producing its latest generation of medium-duty diesel engines at what it describes as the "most up-to-date engine production" facility in the country. The engines are the YaMZ-530 in-line units with a power rating from 120-315hp that are used across the company’s vehicle range, including medium-tonnage trucks, off-road trucks and buses, as well as by external customers. A key attribute of the engines is that they meet current Euro 4 emissions standards and also have the potential to meet Euro 5 and Euro 6 requirements without changes to either the engineering design of basic components or the main technological processess.

The production site is the Avtodiesel Engine Plant in Yaroslavl, roughly 160 miles north-east of Moscow. The 57,000 sq.m facility represents an investment of $330m and has a workforce of 200 individuals; the current output is 18,000 engines a year. Built after it was given the go-ahead by major shareholder Oleg Deripaska, the plant has been designed to comply with the best of contemporary global production practices, according to GAZ Group president Vadim Sorokin. In pursuit of this objective, the basic processes the plant employs were developed in cooperation with Italian system supplier Comau, says YaMZ-530 project manager Ruslan Grekov. In particular, says Grekov, Comau helped GAZ to refine the configuration and operation of the plant in several key areas:

• Design of the production layout
• Development of technological processes, logistics, the quality management system and organisational structure
• Selection of potential component suppliers (though GAZ made the final decisions).

Now that it is up and running, Yaroslavl carries out the machining of the three base parts of the engine – the cylinder block, cylinder head and crankshaft – as well as assembly and testing of the completed units. Grekov says that both the layout of the equipment and the technology employed reflect the company’s aim to achieve parity with global standards.

On the first count, he indicates the following key factors:

• A single machining and assembly shop that accommodates the machining lines for the block, head and crankshaft, plus the engine assembly line
• Automatic measurement systems integrated into the process flows
• Condition monitoring of the equipment and tools carried out within the Manufacturing Execution System (MES), which is in turn connected to the central control room
• The machining flows of basic parts accord with the requirements of the de facto industry standard, the Toyota Production System.

On the second count, he lists the specific systems involved as evidence of the extent to which GAZ has sought best-in-class technologies for its shopfloor. These include:

A particular point to note, says Grekov, is that the CarlZeiss coordinate measuring machines used for checking dimensional accuracy are built into the production equipment to provide an "active control" capability. He adds that the tool management system was devised in cooperation with German company Walter.

The working environment
The YaMZ-530 production facility is housed in two separate shops: machining and warehouse areas covering 23,788 sq.m. Grekov says the infrastructure has been specified to create an environment that complies with stringent requirements in terms of its cleanliness, temperature, pressure, lighting, noise and vibration resistance.

For instance, the wall panels may be only 10cm thick but provide the same degree of thermal insulation as 65cm of brick due to their high-quality material and triple-layer composition. Meanwhile, the ventilation system for the machining assembly shop creates an excess internal pressure of 2-5Pa to inhibit dust intrusion from the external environment.

However, as Sorokin makes clear, GAZ has not focused solely on infrastructure and technology but has also sought to inculcate the plant’s employees with appropriate skills and attitudes. “There is a process of systematic training and development of the employees in both core competences and general management skills,” he confirms. Employees have been variously trained in project management, quality management based on the ISO\TS 16949 standard, production management, personnel management, IT, risk management and equipment maintenance. Sorokin adds the ISO/TS 16949 standard is familiar to “100% of employees”.

One tactic the company has used to help it achieve these ends has been to recruit personnel with proven educational attainment. In consequence, says Sorokin, 72% of the employees at Yaroslavl have been through some sort of higher education.

Moreover, the expertise of certain external companies supplying equipment or support services to GAZ has also been tapped as a source of skills development. Grekov says that the design and process engineers at Yaroslavl have spent time as interns at other organisations. “Over 50 employees have been trained for up to nine months in enterprises in Europe,” he states. “As a result, they adopted the methods used by the world’s industry leaders.” He says that companies with which GAZ has cooperated in this way include Comau, Grob Werke, Heller, ThyssenKruppKrause and also Austrian company AVL List, which has acted as a provider of technical support for the development and calibration of the engine itself.

Future development
Another key idea in Sorokin’s thinking about the development of the plant is that it should act as a catalyst for the development of an indigenous supply chain. “The production of the new engine family is the basis for developing a modern component supplier base in Russia,” he states. Sorokin explains that around 70% of the components for the engines are sourced within Russia; the key suppliers are based locally in Yaroslavl. 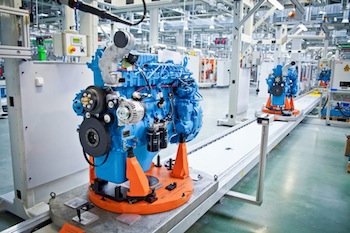 So far, all these efforts appear to be paying off. Grekov says that, at launch, the plant tested 100% of the completed engines in ‘hot’ mode. Now, though, it is confident enough in its production processes to carry out the majority of testing in ‘cold’ mode.

The company can now turn its attention to how both the plant and the engines it makes could be developed, for example to meet Euro 5 and Euro 6 emission standards; higher power versions (up to 210hp for four-cylinder engines and 350hp for six-cylinder units); increasing the production capacity; and further localisation of component production.

In terms of final product quality, Sorokin has no doubts that the investment in the Yaroslavl plant has been vindicated: “YaMZ-530 diesel engines are on par with [the] best global peers in terms of specific power output, reliability and fuel efficiency”. In fact, he reveals that the company has already embarked on a project to increase their market potential by diversifying the fuel they can use: “We are currently creating, on their basis, a family of CNG-powered engines for commercial vehicles.”

Meanwhile, at Komatsu in Japan...
The assembly hall at the OEM’s new plant at Awazu, Ishikawa Prefecture, contains two parallel lines – for construction and off-highway vehicles – that were previously housed in separate buildings. This has been made possible by the use of an ‘aircraft hangar’ construction methodology. At 30-50 metres, the lines are also significantly shorter than before. In addition, a pit three metres deep lies beneath the production area, housing both building services and assembly-related equipment and thus enabling the floor itself to be completely flat. 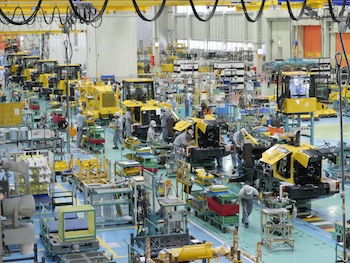 Awazu has parallel construction and off-highway production lines
As a result, the floorspace required by the two lines is 30% less than that needed when housed separately, which means that each unit of floorspace is now 1.5 times more productive. A further benefit is that personnel can easily switch between lines to help out with fluctuations in demand or problem-solving, thereby enhancing overall efficiency.

The new assembly facility is also intended to be far more energy efficient; ultimately, Komatsu is targeting a decrease in electricity usage of as much as 90% compared with the corresponding combined figure for 2010. This reduction will come from the use of more energy-efficient technologies and the compact nature of the facility.