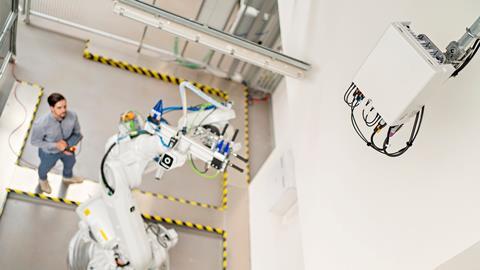 The interconnection and networking of production equipment in a factory environment is nothing new. First cables and then optical fibres have long since been the conduits for the downloading of production instructions and, for instance, the transmission of shopfloor status reports back to a central monitoring point.

But now the prospect of completely wireless communication for all types of production-related information is starting to establish itself as a real possibility with not just savings in physical infrastructure but also more rapid data transfer as primary objectives. The means will be the latest 5G communication technologies and one car maker now exploring the potential they offer is Škoda. 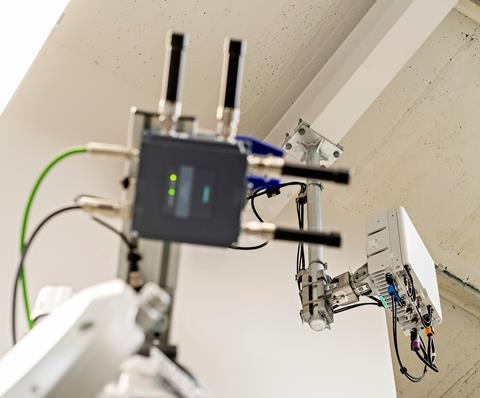 The company has launched a pilot project at its main production site at Mladá Boleslav to the north of the capital Prague to test the potential of using of 5G to support production operations. The project involves the use of a private 5G network to support a mix of laboratory testing and one so far limited but real application involving finished vehicles. It was formally launched at the end of last year with the initial installation carried out in the first quarter of 2022 and the test infrastructure becoming operational from the start of the second quarter.

The company has no doubts that the project could prove highly significant for its future. Christian Schenk, board member for finance and IT, says: “The private 5G network is a milestone for Škoda Auto on its way to a Smart Factory. The technology offers enormous potential for future innovation. We are testing 5G in daily operation and we will also be evaluating future uses of this technology to make us even more efficient and flexible.”

The details are confirmed by the company’s spokesperson for digital technologies Martin Ježek, who emphasises that what is involved is emphatically not an adaptation of commercially available consumer-focussed mobile communications products. “There is nothing in common with commercial counterparts,” he states. “Even the electronics attached to the robots are not similar to mobile phone hardware.”

“We need to figure out what capabilities can or cannot be enhanced by 5G. Factors that will be investigated include stability, response time, security and throughput” – Martin Ježek, Škoda

Stress test
The robots in question, as Ježek further explains, are not on the factory floor but are instead offline in a facility known as FabLab where a small number are being used to explore the potential of 5G to enhance their performance. “We need to figure out what capabilities can or cannot be enhanced by 5G,” he states. “Factors that will be investigated include stability, response time, security and throughput.”

As such those capabilities do not relate only to the machines’ physical movements or load capacities, but instead concern the type of data they can transmit and the reliability and speed with which they can do so. The downloading of programming data is an obvious application, but Ježek indicates that a key area for research is the ease with which machine operation data can be collected and transmitted back to some central monitoring point.

As Ježek confirms, a key potential application Škoda is focussing on in the project is predictive maintenance. With a robot population at Mladá Boleslav alone of several hundred, the potential is obviously huge but in terms of direct production operations “5G is not yet on the shopfloor at production level.”

But 5G communication is being used in one application that is real albeit still only at a small scale. This is the prototype for an automated transportation system for completed vehicles that takes them from the end of the production line to an outdoor storage area before they are shipped off-site to dealers.

Tow truck autonomy
In fact, the whole system is completely new with not only the 5G element but also the physical transportation hardware being tested for the first time. Ježek states that the hardware involved is a prototype of a tow truck onto which a completed vehicle is loaded and then towed to the storage location. The intention is to obviate the conventional established procedure of using human drivers to navigate cars from the production to the storage areas and to replace it with the completely automated movement of finished vehicles from the production to the storage areas. “It is actually quite a complicated logistical operation to get the vehicles there and the drivers back,” Ježek points out.

The 5G system element is necessary to ensure the autonomy of the tow truck. “The system decides its own routing when its way is blocked and can memorise it,” explains Ježek. “So, it needs secure communication with minimal latency.”

But, as Ježek further explains, Škoda is not developing 5G use cases entirely on its own but is cooperating with the Czech Technical University in Prague. The university, he adds, has a laboratory in Prague focussed on the development of ‘smart factory’ applications with 5G use cases being tested there as well.

In fact, Škoda is also collaborating with two other partners in research the potential of 5G technology. These are communications network provider Vodafone and hardware supplier Nokia. The first of those is providing support remotely on a continuous basis, while the second is collaborating on specific projects. Neither has any personnel located at Mladá Boleslav to support the 5G work. Ježek adds that the infrastructure to support the network also includes further mobile communications hardware from Samsung and Netgear as well as routers from Siemens and Advantech.

“We are aiming to gain experience with numerous different aspects of system operation,” confirms Ježek. “These include 5G infrastructure settings, roaming, throughputs at different bandwidths, management, the behaviour of different end devices and routers and integration into the existing data network infrastructure, as well as with the administrative processes of acquiring private frequencies for private infrastructure.” 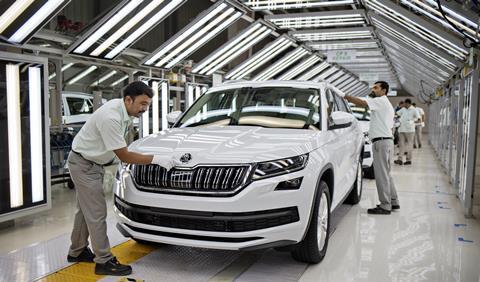 The 5G project will extend out to Škoda’s plants in India. This will enable remote support between maintenance and technical experts on two different continents by creating a real-time digital twin and communicating using 3D objects in augmented reality

Remote control
Looking ahead, another application being considered for 5G at Mladá Boleslav is the uploading of software into completed vehicles. But, Ježek says, that is not yet being implemented.

But 5G will play a role in an operation based in the Czech Republic but which then extends out to India. This is an initiative called Fata Morgana that enables remote support between maintenance and technical experts in two different continents by creating a real-time digital twin and communicating using 3D objects in augmented reality.

As Ježek explains Škoda is already developing remote monitoring of maintenance at the two manufacturing plants it operates in India, at Aurangabad and Pune. But now ‘digital twins’ of selected technologies at the two plants have been constructed to enable this task to be carried out with complete accessibility and transparency as if Škoda personnel elsewhere were actually on-site. “They are being tested out now,” he confirms.

Ježek adds that when solving tasks, the personnel involved use three-dimensional graphics and augmented reality. “This technology relies on the much faster data flow and lower latency of 5G networks,” he explains. “Microsoft HoloLens 2 augmented reality glasses also contribute to improving the effectiveness of the digital twin.”

Nevertheless, Ježek confirms that all of this is only a start-point for the company. “We are at the beginning of the project of integrating 5G technology into the Škoda network environment and at the moment are testing, optimising and configuring the 5G infrastructure and network devices,” he states. “More applications and uses in the production area are yet to come.”