Mike Farish looks at how the Industry 4.0 concept has become a reality at a leading US transmission manufacturer 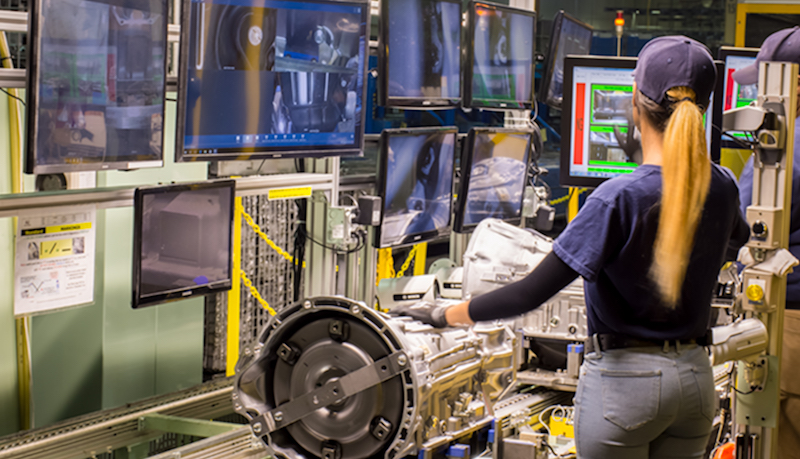 The concept of Industry 4.0 (I4.0) does not necessarily lend itself to a precise definition. Indeed the fact that more or less the same set of ideas is also known variously as the Internet of Things (IoT) and, for instance, in the massively growing economy of China as Made in China 2025 indicates that what is involved is arguably a set of aspirations rather than something as specific as a set of international standards.

Nevertheless in technical terms an approximate consensus does exist about what is involved. This argues that I4.0 is about how a series of different but related technological developments – sometimes state-of-the art, sometime well-established – can be deployed in a manner that can achieve unprecedented systemic capabilities. These include intensive use of networking and communications based on internet-type technologies and may also involve recourse to 'Cloud' computing – in other words the use of remote but in effect nearly limitless data processing resources.

In business terms the aims are for improvements to overall operational efficiency and effectiveness being made, resulting from the integrated and targeted deployment of specific technologies in a manner that is mutually reinforcing.

Infrastructure for data transferRight down at shopfloor level none of this will be possible without the ability to transfer manufacturing data from the equipment where it is generated to the computing resources where it can be processed, and that requires modern networking. One company that has first set about creating this capability and is now pressing on to the next stage of getting appropriate software systems running on it is AW North Carolina (AWNC), part of the global Aisin group, that employs just over 2,000 people in the manufacture of 600,000 transmission systems per year for Toyota in North America at a 1.3m sq.ft plant in Durham, NC.

But, as plant manager for IT John Peterson recalls, when he started work at Durham at the beginning of 2016 the supporting internal communications infrastructure was outdated and unreliable. The telecoms system was “15 years old” and the plant networking system only marginally better at “10-12 years old”. On his first day in the job “the phone system failed” removing any doubts as to their need for replacement. Moreover that set a pattern with “hardware failures” of various sorts continuing to be a commonplace occurrence over the following months. This had serious implications for manufacturing operations and the company has now completely renewed its “switching and server infrastructure” – in the latter case with a Cisco Blade Server system providing seven terabytes of NetApp storage.

The company has also renewed the wireless capabilities at the Durham site and at an associated 350,000 sq.ft logistics facility about 15 miles away in order to provide an enhanced capability to use handheld devices such as scanners. Peterson adds that the company has further guarded against possible system failure by building in sufficient “redundancy” in IT resources at both sites, so that if necessary “either can run the other as well as itself.”

Multiple layer networkWhat the company now has is a multiple layer set of networking systems. Peterson identifies two of the essential elements as “Ethernet and wireless LAN” systems that he says have been “put in with the help of Cisco”. But there is also “grid pattern of drop points” so that however any piece of equipment might be relocated it would “never be more than 30 feet” from a connection point to the main network. Moreover, he adds, “we also did the same thing with a separate independent video network” that can support relevant supervisory and quality control applications all over the plant.

The whole installation project had to be accomplished without any interruption to the day-to-day operations of the plant. This imperative is confirmed by Dan Wiggins, senior director automotive and manufacturing for Cisco, who says that the need to achieve that is nowhere more acute than in the automotive sector. There is, though, a well-established methodology for ensuring successful project implementation not least through concentrating as much of the work as possible in scheduled plant shutdown periods. But at a deeper level he observes that it also requires an integrated cooperative approach between IT staff and those involved in manufacturing rather than a segmented, sequential way of working. As he puts it: “IT and OT have to work together.”

Meanwhile shopfloor operations comprise everything necessary to turn rolled steel arriving in at one end of the plant into completed transmissions leaving at the other including “stamping, heat treatment, milling, brazing and assembly” at a rate of 175 completed products per hour. The number of programmable logic controllers (PLCs) that provide the interface between the equipment and the wider network is huge. Peterson says that there are “two thousand pieces of equipment out on the shopfloor” and that each of them has “at least two or three and sometimes as many as ten” PLCs attached. The PLC devices themselves are “mainly Mitsubishi with a few Allen-Bradley”.

But even when things were working well, says Peterson, the company still lacked the ability to gather, analyse and react to data gathered on the shopfloor about machine performance and overall process effectiveness within anything like an acceptable timeframe. At the time of his arrival, says John Peterson, the only system used to support data collation and analysis was “Microsoft Excel”. In consequence “it could take days or even weeks,” he confirms. “But what we needed was to be able to achieve that within minutes or a few hours.”

The point of installing this new communications infrastructure was to enable the company to implement “new application packages” that could support and enhance its manufacturing operations. In particular it is now in the very first stages of introducing new ERP (enterprise resource planning) and MES (manufacturing execution system) software suites. As such the company got a pilot cell for the new MES software underway in May this year with the expectation that it would then be implemented for real on a step-by-step basis from the late summer onwards. In contrast though preliminary work on implementing the ERP package started a few weeks earlier it will go live in a “big bang” manner later on. “You have got to have finance, purchasing and sales go live at the same time,” Peterson explains. The MES, he confirms, is the Wonderware system from Schneider Electric and the ERP the Microsoft Dynamics package.

Peterson indicates that while the company is not officially labeling all this as an I4.0 project that it nevertheless complies with the broad outlines of what the term implies. “We are now right on the front edge of enabling that,” he confirms. One aspect of the way the new systems will operate that certainly does fit that bill is that the ERP system will run initially, in part at least, on the Microsoft Azure Cloud computing service. “We will have a hybrid,” he states, explaining that the physical location of the site makes it “fairly remote from an internet perspective”.

Rewarded with reliabilityBut Peterson adds that the longer-term intention is to move computing resource increasingly away from the site itself and onto the Cloud. It will “make sense” to do so, he explains, from the perspective of both cost and general efficiency as the company gets used to working that way.Nevertheless Peterson says that even before getting the new software systems up and running the company is still reaping real benefits simply from the upgrade in the networking capabilities that will support them. The main one is their sheer reliability. “We had several occasions previously when the entire network went down because of hardware failure,” he confirms. “We also had occasions when we were bottlenecking the system so that for all practical purposes it was shut down.” All such instances have an immediate deleterious effect and given that “our revenue generation here is about $270,000 an hour” then their seriousness is self-evident.

Meanwhile one particular technical benefit he identifies is the near complete obviation of the “shadowing” caused by the presence of large pieces of equipment that made handheld devices ineffective in their immediate vicinity. “There are very few such zones now,” he states.The total cost of all the networking and communications upgrades carried out by AWNC including the new phone system and disaster recovery capabilities has been, Peterson reports, “about $1.2m”. By the time the ERP and MES systems are fully operational that figure is likely to have risen to “$3.2m total”. The target date for achieving that is “April next year”.

Once that is the case then the company has a number of target areas in mind where improvement will be sought. One is “inventory management”, which Peterson concedes is currently “not very good at all”, but which he expects to improve markedly not least because of the increased capability to carry out scanning procedures. Another will be in “our ability to react to quality alerts”, which he says will be “paramount” as a benchmark of success.

As such the sheer speed at which data on key machine performance parameters can be communicated back to maintenance teams will be crucial. Peterson shares the perception that underpins many such projects that a huge amount of potentially useful data is “out there in the machines” but has previously either been irretrievable or retrievable only by means that are so laborious as to make the task woefully inefficient. Quite literally, he says, the new systems at AWNC will automate data collection routines that until now have been “handwritten”. Moreover an intangible consequence will simply be how people use the extra time they will have when freed up from such irksome routines.

Indeed, says Peterson, the people aspect of such a project is in many ways the most challenging. The company, he indicates, has invested heavily in appropriate training but ultimately people still have to be reassured that the new systems are not going to take their jobs away. Instead the point is to reassure them that though their “jobs have just changed” that represents an opportunity for them as well as the company.