Volvo is the latest European marque to take up a North American manufacturing base. As Ian Henry reports, it joins Germany’s giants in exploring the benefits while coping with the complexities… 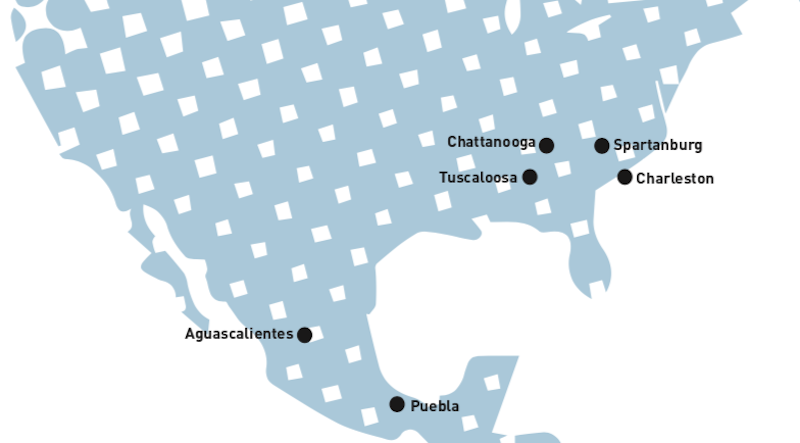 Steeled for battle in SpartanburgBMW has been very critical of the decision by President Trump to apply tariffs on steel imports and possibly on imported cars. They have led to a change in sourcing (which means additional costs for BMW’s US operations), and there are now concerns over import duties which could be applied to US imports of Mexican or European made BMWs. Ahead of the steel tariffs being announced, BMW already sourced around 70% of its steel from within the US but has found it difficult to source the right quality of steel for certain applications from US steel mills. The OEM will also no doubt be concerned over import tariffs on Chinese models, as it intends to make its first fully electric SUV, the iX3, in China and export to both the US and Europe. The decision to make the iX3 in China reflects what BMW (and other VMs) see as the greater opportunities offered to companies that opt to build EVs in China over the US and Europe. But the threat of tariffs on US exports to China could hit BMW especially hard - one estimate suggests that the company’s exports of c64,000 vehicles to China from Spartanburg could generate nearly US$1bn a year in tariffs (while the impact on the Mercedes plant in Tuscaloosa would be around US$765m on exports of c51,000 vehicles a year).

Alabama alertDaimler has also been very vocal in recent months on the issue of tariffs, expressing concern over Chinese tariffs on its profitable exports of SUVs from Tuscaloosa in Alabama. The company is expecting a significant reduction in profits during 2018 as a result of rising international trading costs. While it worries about the profitably of its US factory, it is continuing with plans to make small vehicles in its JV operation with Nissan in Aguascalientes in Mexico. Here two models, a reworked version of the A-class sedan for the US market, and a five-seat crossover on the same MFA2 platform, the GLB, should go into production in 2019. A seven seater version of the GLB has also been rumoured.

Chattanooga charged for EVVolkswagen has had to focus most of its efforts in recent times on coping with the aftermath of the diesel crisis. As a result, it has done relatively little in terms of developing its North American manufacturing operations, although it needs to in order to turn around loss-making activities. CEO Herbert Diess has set the group a new target of a 5% market share, up from 2% in 2017, but has also taken the precaution of setting this objective with a 10-year time horizon. Having sold just over 625,000 vehicles in the US last year, less than half the volume achieved by Hyundai-Kia, it has a long way to go. With a large proportion of its US sales emanating from its Mexican plant at Puebla, and the threat of tariffs looming on Mexican imports, VW may find achieving its objectives even more challenging.

To grow its US sales, VW needs a pick-up truck and a wider range of SUVs/crossovers. In April it showed the Atlas Tanoak pick-up concept vehicle, and although it emphasised the model was not ready for production, it would be an obvious candidate to help fill the under-utilised VW plant in Chattanooga in Tennessee. This plant already makes the Passat sedan (which is facing declining volumes) and the seven seat Atlas crossover, while a five-seat version will be added to the line-up in 2019. This vehicle will involve an investment of US$340m – a considerable sum for a smaller version of a vehicle already made there on the same platform.Looking further ahead, to 2022 and beyond, the Chattanooga plant will most likely add at least one EV vehicle made on the MEB platform. Meanwhile Puebla, which already makes the Tiguan and Jetta, will add a smaller SUV, below the Tiguan. This unnamed model will fill the space occupied by the T-Roc in Europe. Volumes and the precise timing remain to be confirmed, and are likely to be impacted by the final decision on tariffs as well as the long-term prognosis for NAFTA.

Nordic know-how for South CarolinaVolvo has opened its first full manufacturing facility in North America, near Charleston, South Carolina. Production of the S60 will begin in August, with the model destined for export as well as the domestic market. Volvo’s CEO, Hakan Samuelsson, has revealed that Volvo plans to export as many vehicles as it imports (SUVs for example will continue to be imported from Europe, for now). The factory has been subject to total investment to date of US$1.1 billion, and is due to add production of the XC90 SUV in less than two years’ time. In fact, some reports have suggested that Volvo wants to transfer all production of this model from Sweden to the US, although whether this will still go ahead if the US, China and the EU are engaged in a full-blown trade war is open to debate.

At present, the factory’s capacity is set at 150,000 units a year, though it was previously capped at 100,000. This could reflect Samuelsson’s confidence in local demand for Volvo’s models, as well as the company’s recent record sales results across the world.