The flex-fuel burner can use hydrogen, methane or any mix of the two in paint dryers, one of the biggest sources of energy demand in car making. 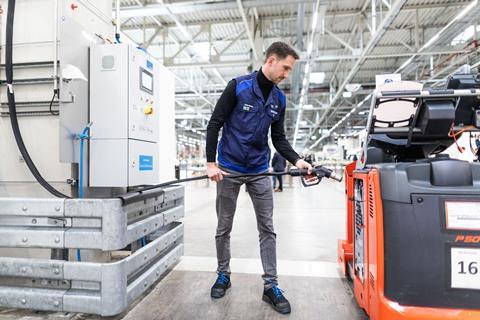 An employee at BMW Plant Leipzig refuels a plant logistics vehicle with hydrogen or wassterstoff (water substance) as it is known in German.

BMW is trialling a newly-developed flex-fuel gas burner that can run on hydrogen in its Leipzig paint shop, making it possible to apply the body coating free of greenhouse gas emissions.

The automaker developed the burner with local combustion technology developer Saacke, based in Bremen and the Fraunhofer Institute IFF in Magdeburg.

“This is a technological breakthrough. It underscores our innovativeness and our determination to make production ever more sustainable,” said BMW board member Milan Nedeljković.

The flex-fuel burner can use either hydrogen, methane or any mix of the two for paint dryers, one of the biggest sources of energy demand in car making. It is also possible to switch between fuels without switching the burner off.

The Leipzig plant will avail of a pipe network installed in its region to obtain a feed of green hydrogen, the kind which is produced using renewable energy instead of fossil fuels.

The fuel has been in use at the plant for almost a decade and now powers 130 forklift trucks as well as tug trains which ferry parts around the plant with five hydrogen filling stations on the plant, the latest of which operates fully automated. The company is also working with partners to trial use of hydrogen in road haulage, it said.

The carmaker is participating in the H2Haul project launched in 2019 between Belgium, Germany, France and Switzerland piloting 16 fuel-cell trucks and install high capacity filling stations. BMW’s part in the project is the running of two of the trucks between Plant Leipzig and Nuremberg.

Through another project, HyCET, BMW is leading a consortium to test trucks that combust hydrogen in their engine instead of generating electricity in a fuel cell to deliver power to the wheels, a test-bed for potential commercial development of this approach. Germany’s Ministry of Digital and Transport has contributed €11.3 million to it