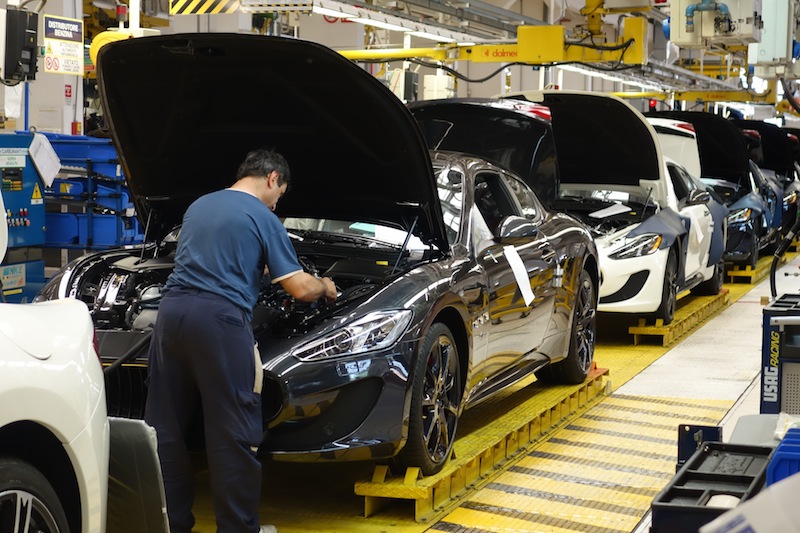 Maserati’s factory at Modena, northern Italy, is one of the oldest in the country and one of the most traditional in terms of its assembly; and yet it is also home to some of the most high-tech cars on sale today.

The plant started making cars back in 1939, when the Maserati brand took its first big step away from the racing obsession of the founding Maserati brothers in line with the commercial plans of its new owner, Adolfo Orsi. It has continued to do so despite a number of financial crises and changes of ownership, and since 2007 it has assembled the successful GranTurismo and GranCabrio four-seat sports tourers, which have achieved combined sales of around 35,000. The company last year shipped 4,700 the vehicles from Modena, similar to the year before, and impressive for a model at the end of its life.

Between 2007 and 2010, the plant also produced versions of the GranTurismo-based 8C supercar for Fiat Group stablemate Alfa Romeo on the same line, and it was this connection that led to Alfa Romeo establishing a second production line for the lightweight 4C sports car with its carbon-fibre tub.

Just as Maseratis of old had their bodies constructed by the famous ‘carrozzerie’, or coach-builders, operating outside Modena, so today the plant is purely an assembly site. It is also heavily manual; robots apply the glue to bond the windscreen, and that is all. As Giuseppe di Coste, product manager for the GranTurismo, explains, “Maseratis have always been made by hand; it’s a plant known for its craftsmanship.”

Carbon-fibre challenges
The same goes for the 4C. The heart of the car is a carbon-fibre tub weighing just 65kg which is made by the Adler Group in southern Italy. With an annual production for this model of around 3,000, it is one of the highest-volume cars to feature this lightweight material – which causes some difficulties. According to di Coste, overall output is being limited by tub production. “The chassis is one of the biggest bottlenecks,” he told AMS.

The carbon-fibre composite is formed of so-called ‘pre-preg’ (pre-impregnated) material which is made in Nottingham, England, by Dutch materials specialists TenCate. According to a statement by TenCate earlier this year, production of this composite could potentially be moved closer to the Adler plant, thus saving time and money. The material needs to be kept cool to avoid premature curing. Alfa admits that the scarcity of autoclaves is currently limiting supply.

The Maserati GranTurismo and GranCabrio bodies are made in Turin by the Fiat Group before being sent for painting, either at nearby Ferrari or at the paint and restoration specialists Carrozzeria Nuova, which handles non-standard colours. Ferrari also makes Maserati’s V8 engines. Maserati might not manufacture anything at Modena itself, but di Coste says that 80% of GranTurismo and GranCabrio parts are made in Italy. After painting, the bodies come to Modena for assembly."Maseratis have always been made by hand; Modena is a plant known for its craftsmanship” – Giuseppe di Coste, Maserati

At Modena, the Alfa 4C first goes to the “body-fitting area”, where a team of ten personnel manually fix the front and rear chassis parts to the carbon tub. The window frames and roof are fitted, then workers attach the bumpers and wings that are made of a plastic called ‘PUR-RIM’ (‘polyurethane-reinforced reaction injection-moulding’).

The car then goes to a special room to be measured at 400 points to check that nothing has shifted during these procedures. The vehicle leaves the factory to be painted, before returning to have its bonnet, doors and some structural parts such as the rear chassis frame removed again for easier access; it is by no means a cost-effective process.

Finally reaching assembly
The body is taken down to the final assembly line by means of a rotating hook system. Here, the drivetrain, cockpit and electrics are fitted; the dashboard is assembled at the plant, rather than outside by its supplier. There are ten stations on the assembly line, each with a stop of 40 minutes, giving a total of six hours 30 minutes. Again, the carbon tub requires additional efforts. “The response of the carbon is completely different compared to steel,” di Coste explains. “You have special bolts, specific torques and tools to do the work.” Despite that, he says the 4C is “really easy” to assemble: “it’s a small toy.”

The Maserati final assembly line is longer, at 26 stations, each allowing 25 minutes. Here the dashboard, seats (made in Italy by Lear), drivetrain and electrics are fitted. It is fascinating to see the drivetrain for the automatic-fitted cars waiting to be attached, measuring almost the length of the car from its longitudinal V8 with gearbox bolted on; the transmission shaft leads to the rear differential, from which the rear driveshafts emerge. 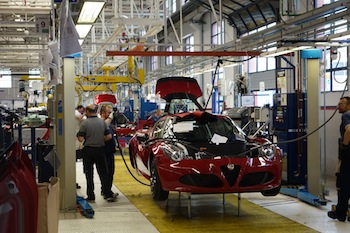 As the cars stop to be worked on (unlike in high-volume production), a buzzer sounds before the lift moves them onto the next station. The relaxed tempo comes as a shock to anyone used to the latest high-tech factories in mainstream manufacturing.

Following assembly, the Alfas and the Maseratis are sent through the same door to the testing department, where each is subjected to a dynamator, a brake test, speed test and a waterproof test.

The finishing department then cleans the interiors and tackles any problems such as dents or paint issues, with a respray and a bake in the oven performed if necessary. The reason that the vehicles might need tidying up is that each is taken for a 25-mile road test, including the city streets around the factory. As di Coste says: “When you test on the road, anything can happen.” This is one of the main downsides of the plant’s location. “Logistics are a big problem. This place was in the countryside when construction started in 1937 – now it’s in the middle of town and there’s lots of traffic,” explains di Coste. “It’s very difficult to stay here.”

Growing away from home
This will become more of a problem as Maserati’s volumes grow. Since adding the smaller Ghibli saloon to the range, the brand has seen its sales increase from 6,200 in 2012 to 15,400 last year. The long-term plan announced earlier this year by Maserati and Alfa Romeo CEO Harold Wester focuses on boosting sales to 75,000 by 2018, helped by the addition of the Levante SUV next year and the Alfieri 2+2 in 2016.

The growth so far has obliged the brand to finally reject its traditional northern Italian outsourcing and shift production to a new factory, situated in Grugliasco, near Turin. “A few models ago, Maserati didn’t have a coach-building factory,” says Lorenzo Ramaciotti, head of global design for Fiat. “Now the Quattroporte [limousine] and Ghibli comes out of a factory that has been vertically integrated all the way from the stamped metal to the assembled vehicle at the completed end.” 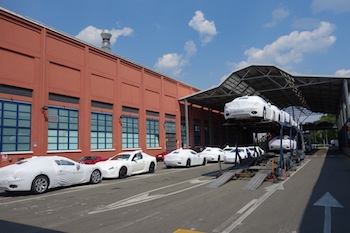 It seems symbolic that Maserati should end its coach-building past with this ultra-modern factory, purchased by Fiat in 2009 from struggling coachbuilder and designer Bertone, which has since entered bankruptcy proceedings.

Maserati has now streamlined its platforms and will build the Levante SUV from a version of the saloon platform nearby at Fiat’s long-neglected Mirafiori plant. The company says that no decision has been made about where the Alfieri sports car will be built, but given that it too shares platform parts with the Ghibli it seems unlikely that it will replace the GranTurismo at Modena.

According to Ramaciotti, there is no real need for Maserati to have a plant at Modena, despite more than 70 years of car assembly there. “From what we see today and the number of cars coming out of the factory in Turin, I’d say it’s not so important,” he said.

Maserati’s slogan for its unprecedented push on global sales in the next four years is “the absolute opposite of ordinary”. In terms of manufacturing, the Modena plant is certainly out of step with rivals such as Porsche, and the future is represented by the more conventional – and also more cost-effective – high-tech manufacturing facilities in Turin.