An entirely new production area has been designed and built for Porsche's hybrid supercar. The director of production for the 918 Spyder talks about the creation of the ‘Manufactory’ at Zuffenhausen, Germany

AMS: What were the criteria for the 918 production area?
Michael Drolshagen (MD): At the start of the project in 2010, we first looked at where to build the 918. We considered our factory at Leipzig, which has its own racetrack, and also Zuffenhausen in Stuttgart. We were to view this as a flagship project, building a completely new vehicle featuring high levels of technology. Also, we wanted to use the production of the 918 to promote Porsche, to enable customers to visit the operation.

I had a meeting with Mr. Hück, who is head of our workers' council and deputy chairman of Porsche’s supervisory board. He supported bringing production of the 918 to Zuffenhausen. Here, there was space available to set up a manufacturing area in what was the old paintshop. There were resources in terms of equipment and skilled workers from the high-volume production areas, plus important test facilities such as the dynometers. Also, the heritage of the Zuffenhausen plant provided a strong link to Porsche’s history.

The cost of setting up the Manufactory was another consideration. During our initial planning, we worked with Mr. Hück and the workers' council to come up with a cost reduction plan [eg flexible working time to secure daily output] that would bring Zuffenhausen into line with the other proposed locations.

AMS: How did you come up with the concept for the Manufactory?
We had lots of discussions with different people about the approach to take. I also travelled around, visiting a number of other luxury carmakers to see how they had approached building a flagship car. This revealed that no one built the car completely in one area of the production facility.

We wanted the whole process to be as transparent as possible, so you can see and understand how the vehicle is built. We produced a rendering of the concept and presented it to the board in 2011 so that all the decision-makers would have the same picture in mind. What we have produced now is very close to that initial design. So, the vehicles are assembled following a particular process, with a lean approach aiming for just one day’s stock of parts to be stored at the Manufactory.

AMS: What were the challenges in building the 918 in this way?
Perhaps the first big challenge was to establish a logistics centre for the Manufactory at Zuffenhausen. The 918 is a very complex vehicle with hybrid systems and a high level of specialist parts, so we had to ensure they were properly stored and isolated where necessary to ensure no damage and an efficient supply of parts.
Another big challenge was the size of the space. We only have 4,000 sq.m, so we had to commission almost 70% of the parts on the lower floor ready for assembly on the upper floor. But in doing this we had to be very aware of maintaining the quality of the parts and delivering them to the assembly line correctly to meet the 111 minute takt time at each of the 30 stations.

"The 918 features around 2,500 parts per vehicle, which is approximately 800 more than the Macan" – Michael Drolshagen, Porsche

For example, the end of the assembly line, fitting the outer body panels, needed three times the number of parts within the same takt time and these obviously needed to be sequenced and handled with great care. So it has been very different to operating in other Porsche plants were there is much more space to operate logistics and assembly. Also, our suppliers are required to deliver parts exactly on time as there is limited space for storing large numbers of parts.

The 918 features around 2,500 parts per vehicle, which is approximately 800 more than the Macan, and these are part of very complex systems. So we needed to establish a zero-defect build at each station. We had to develop a process to check system integrity and part quality at each stage of the build. Systems such as the high-voltage powertrain for the hybrid drive would also need additional testing protocols to be implemented. Identifying faults at the end of the assembly process would potentially require the car to be disassembled to rectify the problem due to the 918’s monocoque design [the build progresses from the ‘inside to outside’] and this would create unacceptable delays.

AMS: Has any part of the 918’s quality control process been implemented on the higher-volume 911 production line?
It is harder to do this on a more conventional production line with a higher throughput of vehicles, but we were able to implement a lot of ideas from the Manufactory in the 911 plant, for instance using electric screwdrivers. Without the cables, we greatly reduced the risk of damaging the cars. [We also now use] our patented surface protection for the exterior parts in the higher-volume plants.

To ensure the highest level of quality we involved all relevant persons into the planning as well as into the daily monitoring process. That meant involving our workers in every part of the decision-making process when designing the factory and the production processes. [This also improves] daily operations such as the exchange of quality-related information between workers and planners to speed up corrective action processes.

Another aspect that differs from other model lines is we had no handover of responsibility [ie from quality planner to factory planner to logistics, etc). The same person planned the logistics process and later, during series production, improved daily processes and secured the quantity and availability of special parts and boxes.

AMS: How many of the suppliers for the 918 were new to Porsche?
I would estimate that 20% of the suppliers were new to us, and a number of those were new suppliers to the automotive industry. For example, the glass for the navigation screen in the cockpit had a special coating from a supplier that normally provided coatings for sunglasses. So working with these new suppliers created an additional need for thorough quality control checks. 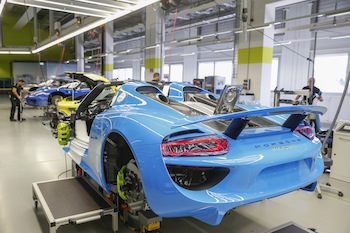 AMS: Did you develop any of the production processes with the view to wider use across all manufacturing operations, or were they purely focused on the 918?
Our main focus was to try and apply the main Porsche production philosophies to a small-volume project. As mentioned earlier, we developed new quality and logistics processes. Due to the fact that there is a high level of customisation available on the 918, we had to ensure we ordered and sequenced our parts very carefully.

In normal production, we would order parts from suppliers five days in advance; for the 918 we have to order 13 days in advance. We are using specialist, low-volume suppliers. For example, we use one paintshop to paint the composite body panels, the bumpers and parts of the chassis – all from different suppliers – so they could only produce a certain volume of each colour variant as it is ordered [by the customer].

One of the biggest benefits of a small volume project is that you can more easily see and experience process gaps as well as possible improvements. You can try different solutions in a small area and roll out it later on to the other model lines and production plants.

AMS: With production of the 918 ending soon, what have you learned from this project?
Perhaps the main thing is to involve the relevant people in a project like this as soon as possible – I mean especially workers, the workers' council and engineers. We put together a team of the right people and held workshops that looked at each station and discussed the processes, tooling and storage that would be needed for that particular operation. This was key to the creation of the Manufactory.

For Porsche, there have been a number of new ideas, such as the improved surface protection system that reduces damage to panels and trim. Also, the use of electric tooling; new station and plant design; a new dress code; and a lot of new processes and technical know-how in the use of carbon fibre materials and vehicle electrification.