Honda: Getting Fit in Mexico 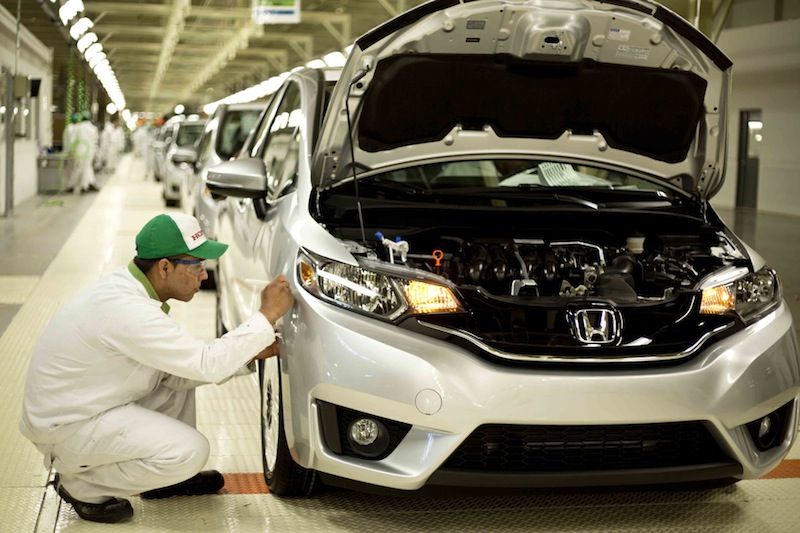 With the opening of its Celaya plant in central Mexico at the start of last year, Honda and its Acura sub-division are now close to being self-sufficient in manufacturing within North and Central America. The Celaya factory is Honda’s centre of small-car operations for those two regions. It takes the production capacity at its eight vehicle assembly sites in the US, Canada and Mexico to a combined 1.92m vehicles – or 95% of sales in those countries, based on 2014 figures.

Celaya was set up initially to produce the Fit (Jazz in Europe) to meet growing customer demand for fuel-efficient sub-compact cars, but has since added the HR-V, a small crossover. It is the first time either vehicle has been manufactured in the Americas.

The factory, in the central state of Guanajuato, was established at an initial cost of $800m and has since benefited from a further investment of $470m for a continuously variable transmission (CVT) plant which is due to start production imminently. At the inauguration of the main assembly site, Takanobu Ito, then CEO of Honda, said: “Our new plant in Mexico is based on the Honda company principle of maintaining a global viewpoint to supply products of the highest quality, yet at a reasonable price, for worldwide customer satisfaction. In Celaya we can see these core values in action.”

Why choose Celaya?
Honda has had a Mexican manufacturing footprint at the El Salto plant at Jalisco since 1988, first with motorcycles and, since 1995, with cars for the local market. Production was switched to the CR-V in 2007. Celaya is fewer than 200 miles from Guadalajara and only 160 miles north-west of the vast potential market of Mexico City. More importantly, it is in the heart of a region which is becoming the automotive industry equivalent of Michigan in the US, Chennai in India and, in previous years, the West Midlands in the UK.

Nissan’s Aguascalientes factory, which has the capacity to produce 175,000 Sentras a year, is 150 miles to the north-west; even closer, just 25 miles away, is the new Salamanca plant for production of 260,000 Mazda 2 and 3 models a year, including a variant of the 2 for Toyota; and Audi, BMW and Kia are in the midst of establishing factories in this region.

The presence of these OEMs has sucked in a large base of global suppliers, including around 40 who traditionally follow Honda’s transplant operations around the world. Celaya is increasingly being integrated into the nearby supply network, building on the local content of 65% at start-up.

Honda Celaya has the capacity to produce 200,000 vehicles a year
Celaya is capable of building 200,000 cars a year, taking Honda’s annual production capacity in Mexico, including Guadalajara, to 263,000 units. However, it made only around 83,000 last year. The site employs 3,200 people, excluding the new transmission facility, and around 20% of the workforce is female – an unusually high proportion for a Honda factory. Some 80% of the output goes to the US and Canada; the remainder is sold locally.

To improve logistics, the plant has its own rail spur, and Honda has part-funded the re-routing of the regional railway around the local city, which grew rapidly in 2014. Honda uses railways to transport finished cars to Mexico’s Pacific coast as well as to the Gulf for shipment to the US and Canada.

“Considering the needs of the Mexican market, which is expecting continued growth and also serves as a production base for the North American region and beyond, we decided to make the Fit the first product to be produced here,” Ito said. “Celaya has a lot of good land and good public safety – a place where we can really get good associates to work,” he added. “The city of Celaya wanted us to develop. They wanted us to come. The state of Guanajuato had a plan for this, so the infrastructure could be created quickly.”

A troubled beginning
It became clear in the early months that Ito’s faith in the local labour supply and infrastructure was not entirely well-founded – and he also failed to take into account the local bandits. Production started two months late through a combination of an inexperienced workforce, language barriers and a rail system prone to delays and the odd hijacking (parts kept disappearing from completed cars, causing rectification headaches). As a result, there has been an uncharacteristically high (for Honda) number of recalls, leading to three-month pay cuts for executives and a complete review of quality.

None of this was of much solace to US dealers faced with high demand but a shortage of supply. “Having a new overseas factory, with a new vehicle and a new transmission factory… this is something we haven’t done before and a new challenge for us,” Ito told the media around start-up time.

Meanwhile, steps have been taken to overcome the linguistic and cultural barriers between the Mexicans and the growing number of Japanese who have relocated to Celaya. The ranks of the latter are expected to swell to 5,000 by next year as a result of the presence of Honda, Nissan and Mazda. Japan is the largest investor in Guanajuato, spending a total of $4 billion and creating 25,000 jobs so far. As a result, the state and the city are doing their best to learn the ways of their new citizens.

Japanese language classes have been set up in various academies, while local hotel staff greet the new visitors with “konnichiwa”, the Japanese word for “hello”; and a local thoroughfare has been renamed Mexico-Japan Avenue.

But the mixture of cultures has also brought out a few old clichés about racial stereotypes – Mexican “manana” (“tomorrow”) versus Japanese “ahorita” (“right now”). So, while the Japanese are trying to instil something of their work ethic into their hosts, Mexicans are trying to teach their new paymasters that flexibility is just as important.

Transferring technology from Yorii
Celaya is not a carbon copy of the Yorii plant in Saitama, Japan, where the domestic-market Fit is made as well as the European Jazz, but it has adopted many of its processes and technologies to raise quality and reduce the environmental footprint. It is a highly automated factory dedicated solely to two small cars: the Fit and the HR-V.

Among its key advanced production technologies are a press shop featuring high-speed servo-stamping and a rapid die-changing process which increases the efficiency of the stamping operations by 40%. In the welding shop, a general welder system reduces the number of robots needed to assemble the body-in-white while increasing the number of weld points.

This is crucial, since the latest Fit incorporates the next generation of Honda’s Advanced Compatibility Engineering (ACE) body structure aimed at achieving maximum scores in the NHTSA NCAP and IIHS Top Safety Pick tests. The car uses more ultra-high-strength steel than any previous Fit/Jazz, increasing overall body stiffness while stripping 26kg from its all-up weight.

As at Yorii, there is also a three-coat, two-bake, water-based painting process – eliminating the primer coat and bake – instead of the traditional four-coat, three-bake system. This is said to reduce energy consumption by 40% without any loss of finish quality.

The final assembly line is automated wherever feasible to cut production time, save space and reduce heavy lifting. There are a number of in-plant sub-assembly processes, in particular the delivery of powertrain and chassis modules underground, for greater efficiency and precision. Meanwhile, LED lighting throughout the buildings and vehicle yard ensures more worker-friendly illumination while reducing energy usage.

An initial output from this plant of 350,000 units a year will take Honda’s Stateside transmission manufacturing capability to 1.7m a year in 2016, and this will rise to more than 2m when the Celaya CVT facility is at its full capacity of 700,000.

Celaya is Honda’s third transmission factory in the Americas after Russells Point, Ohio, and Tallapoosa, Georgia. Tetsua Iwamura, COO of Honda North America’s regional operations, said: “We are establishing a production base with outstanding global competitiveness in CVT manufacturing in the same location as our new automobile plant. We continue to advance our commitment to build products close to the customer.”

The transmission facility takes Honda’s total investment in the US, Mexico and Canada to $21 billion and its workforce to more than 33,000. In addition to the two plants at Celaya and El Salto, the OEM has four production operations in the US and two in Canada. There are also two engine plants in the US and one in Canada, while El Salto produces a limited number of engines for the locally made CR-V.