The deficiencies of Li-ion batteries contribute to consumer doubts about EVs, but switching to a different type of technology – Al-air fuel cells – could solve crucial problems

A long-range, lightweight, cost-efficient, recyclable and ethically sourced power unit is, arguably, the Holy Grail of the EV market. Lithium-ion (Li-ion) batteries are currently the main focus of multibillion-dollar investments by OEMs and tier suppliers, but there are other contenders that could offer a breakthrough with alternative technology. One of them is the aluminium-air (Al-air) power source.

Trevor Jackson, an engineer and former officer in the UK’s Royal Navy, began experimenting with Al-air batteries in 2001 at his modest workshop in Callington, Cornwall. Although the Al-air power source was invented back in the 1960s, it was deemed unfit for commercial deployment due to its electrolyte being dangerously caustic and poisonous. 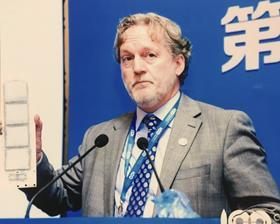 Jackson’s experiments led to the development of a new, safe electrolyte which he has even tasted in front of startled industry observers in order to prove its benign properties. He claims the power source can give an EV a 1,500-mile (2,400-kilometre) range. To put that in context, a Tesla Model S has an estimated range, from a single charge, of 370 miles. According to Jackson, replacing a standard Tesla Li-ion power source with an Al-air device of the same weight would produce a range of 2,700 miles.

Jackson’s invention, he claims, boasts nine times the energy density of a Li-ion power source of comparable weight, or four times its energy density in equivalent volume. It is also much smaller and so takes up less space in the chassis. Furthermore, the power source is claimed to be recyclable, replaceable, environmentally friendly and ethically sourced. Looking at the financial aspect, it works out at 1/7th the cost per kilowatt hour of a Li-ion power source.

The batteries are constructed from plastic, aluminium and a non-toxic, safe electrolyte. They can be air-freighted wet or dry and are not flammable – in stark contrast with Li-ion batteries, which are vulnerable to thermal runaway. They also cannot be short-circuited as there is no stored charge; they are a power source rather than an energy storage device, with the energy being derived from a chemical reaction from stable aluminium.

Jackson has got Al-air power source depletion covered, too. A discharged Al-air cell unit would simply be replaced with a recycled one which could be sold at supermarkets and convenience stores; swapping an empty power source for a new, fully charged one would take about 90 seconds, he claims, and would be accomplished at a refuelling machine serving multiple ‘swap stations’.

It might seem wasteful to take out a car’s power source once it reaches the end of its range; what happens to all the batteries that are removed instead of recharged? Jackson has given careful consideration to this aspect and developed what seems like a feasible model for reverse logistics. In fact, the only component which is spent is the ‘fuel’ – the aluminium plates, which can be recycled.

Jackson explains: “The process will be automatic and the waste hydroxide will be recovered and returned to the aluminium infrastructure that already exists, where it will be reprocessed into aluminium metal using the low CO2 (inert anode) process developed by Rusal.”

While rechargeable Li-ion batteries can cost tens of thousands of pounds to replace, Jackson says that ‘refuelling’ by swapping a drained Al-air power source for a recycled one at the end of its 1,500-mile range is vastly cheaper, taking into account materials, logistics, labour and other factors. “You only pay for the miles you drive and you only pay seven pence per mile,” he states.

Jackson alleges that vested interests in the Li-ion power source industry are undermining his product. Given the vast market opportunity that EVs will present as the industry continues to move towards an electric future, power source technology is certainly an area worth fighting over. According to Bernstein Research, the global vehicle power source market is expected to increase to a value of $500 billion by 2050, with running costs set to fall to the level of petrol engines by as early as 2023.

A 2017 evaluation by the UK Trade and Investment agency lauded Jackson’s invention as a “very attractive power source” based on “well-established” technology, and said that it produced much more energy per kilogram than standard EV types. Two French universities have also validated the power source. 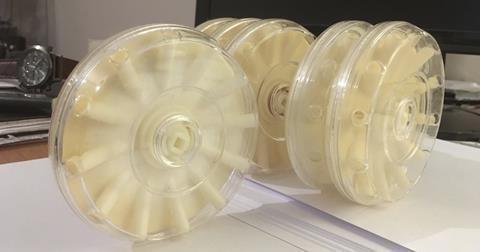 The Al-air fuel cells are constructed from plastic, aluminium and a non-toxic, safe electrolyte and act as a power source rather than an energy storage device

Bolstering Jackson’s belief in Al-air are LG Chemical, Sanyo, Johnson Matthey, the UK Ministry of Defence’s Defence Science and Technology Laboratory and Southampton University, which are all helping to develop the technology. Acronic, Phinergy and Fuji Pigment are also exploring its potential industrial applications.

In April 2019 Métalectrique Research & Development (MAL), Jackson’s Plymouth-based company, secured a £104,000 ($137,000) grant from the UK’s Advanced Propulsion Centre (APC) to demonstrate this technology. APC, located at the University of Warwick, has since elevated the MAL research to ‘special project status’.

None of the major companies are working on [Al-air] at the moment. The reason is, it is a complete system and requires a set of very different manufacturing procedures and equipment

Moreover, Austin Electric, an Essex-based engineering firm and owner of the Austin Motor Company brand, has signed a multimillion-pound deal with Jackson to install thousands of his Al-air batteries into its EVs, starting in 2020. First to be fitted with Al-air batteries will be three-wheeled tuk-tuks – the small taxis popular in many Asian countries.

Danny Corcoran, Austin’s CEO, applauds the technology as having enormous advantages over traditional EV batteries and even suggests that it could trigger “the next industrial revolution”. 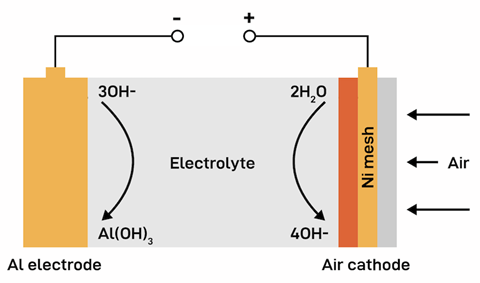 As for the science behind the invention, Youmin Rong, IHS Markit’s China-based senior analyst for clean technology and renewables in the Gas, Power and Energy Futures division, explains: “To pursue higher energy density, theoretically speaking, metal-air is the most ideal pair. This includes Li-air, Zn-air [zinc], Mg-air [manganese], Na-air [sodium] and Al-air where Li-air is capable of providing the highest specific energy density followed by Al-air.”

He adds: “However, Li metal is very difficult to work with due to its highest reactivity. Nevertheless, aluminium is the most stable metal among all five candidates.” 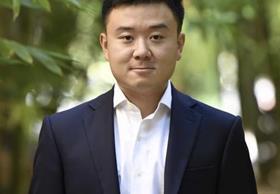 However, Rong at IHS says the technology is still at an early stage and that the major challenge lies with the air cathode. “The sluggish efficiency of the oxygen reduction reaction is the barrier for its application. Other problems include CO2 reaction with alkaline electrolyte producing carbonate precipitates, water evaporation to open air [electrolyte dry-out] and electrolyte penetration into the pores of the air cathode.”

Despite these technical drawbacks, Rong believes that Al-air should provide better specific energy density than Li-ion, though volumetric density may be challenging due to the air cathode. He also warns that, despite its promise, it is too early to make a judgement. “Its wider uptake needs further verification by end markets at system integration level, which is crucial to the economic success of this technology,” he states.

Perhaps this is informing the decision of EV battery manufacturers not to invest or explore the technology in any significant way at this time. In November 2019, for instance, Europe’s leading power source start-up, Sweden’s Northvolt, unveiled plans to produce 150 gigawatt hours of power source capacity by 2030, enough to power 2m Tesla cars. But Northvolt has not – yet – explored or embraced Al-air technology.

CATL, the world’s largest producer of EV batteries, with clients including BMW and Daimler, is still a Li-ion stalwart. This could be significant, because almost half of all power source and plug-in hybrid vehicles sold today are bought in China.

“None of the major companies are working on this at the moment,” Rong confirms. “The reason is, it is a complete system and requires a set of very different manufacturing procedures and equipment. Given the capacity scale of today, it is expensive to invest in one single technology that is very different from the existing [one].”