The turbines with a combined output of more than 100 megawatts (MW) will be installed at the automaker’s Papenburg, northern Germany test track. 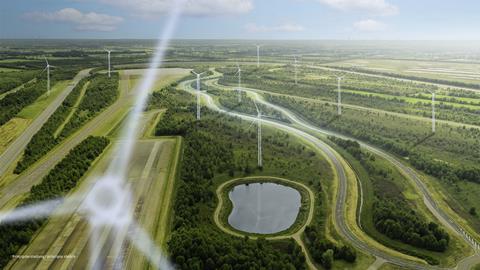 Mercedes-Benz Group AG will build a wind farm to meet more than 15% of the power consumption of the group’s plants in Germany from the middle of the decade, it said.

The turbines with a combined output of more than 100 megawatts (MW) will be installed at the automaker’s Papenburg, northern Germany test track, it said in a statement.

The automaker will turn to partners who will install, operate and own the wind turbines and buy the power from them through a long-term power purchase agreement that will be in the hundreds of millions of euros, Mercedes-Benz said without specifying further.

The measure will boost the automaker’s energy resilience, a new priority for heavy industry in Europe as Russia severely restricts gas exports on which Germany is particularly reliant. It will also be an incremental step towards the company’s future carbon neutrality ambitions.

The automaker will also look into expanding the installation of solar photovoltaic arrays at the 800-hectare site, it said.

The country faces the prospect of energy rationing this winter if it raises the alert level of its emergency plan for energy by one further notch.

“The targeted expansion of renewable energies at our own locations is an integral part of our sustainability strategy,” said Jörg Burzer, Mercedes-Benz head of production and supply chain management.

“With the realization of the planned wind farm project in Papenburg, we are taking an important step in this direction. We make an active contribution to the energy transition and the expansion of onshore wind power in Germany.”

The automaker said that production at its plants became CO2-neutral this year implying the use of carbon offsets since it aims to cover more than 70% of its production-related energy demand with renewable energy from 2030.

Expansion of solar photovoltaic systems through investments in the hundreds of millions of euros by 2025 will contribute to this target, the company said.

The energy initiatives will translate to a halving of CO2 emissions per passenger car over the entire life cycle by 2030 versus 2020 levels, the automaker said, meaning both emissions from manufacture and on-road use.

“The most important levers for this are the electrification of the vehicle fleet, charging with green electricity, the improvement of battery technology and the comprehensive use of recycled materials and renewable energies in production,” the statement said.