As Mercedes-Benz earmarks $1bn for its CV operations in Brazil, AMS tours final assembly at the São Bernardo do Campo plant, which plays a part in producing the entire Latin American truck line-up 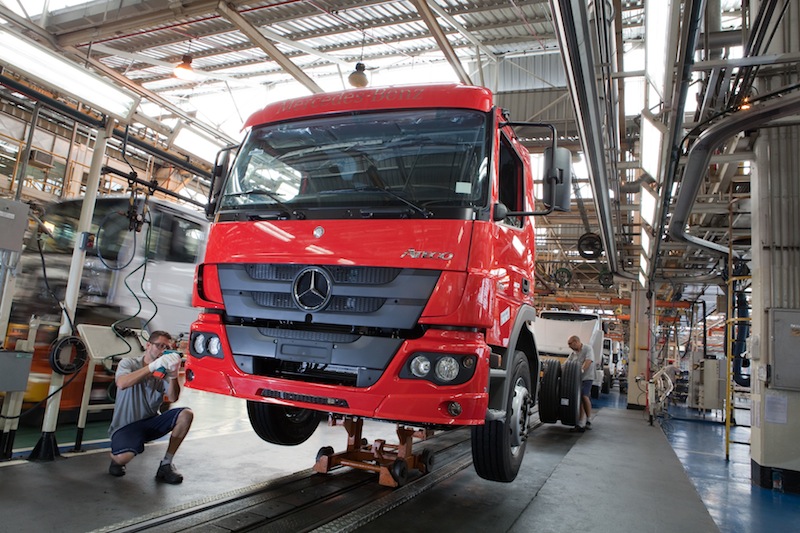 “Today, Brazil is the most important sales market for our trucks worldwide,” said Stefan Buchner, head of Mercedes-Benz Trucks Europe and Latin America, at the end of last year. As of this August, the company had achieved a market share for 2014 of 25.5%; last year, when the proportion was 24.7%, parent company Daimler closed 2013 with sales of 39,000 trucks and 13,000 bus chassis. Buchner added that the company has “faith” in the further growth potential and promised continued investment in new products and “state-of-the-art” production facilities, including the modernisation of its São Bernardo do Campo and Juiz de Fora plants in São Paulo and Minas Gerais.

Mercedes-Benz Brazil CEO Philipp Schiemer said the six-year investment of 2.5 billion reais ($1.1 billion), nearly half of which will be spent over the next two years, is intended to “increase the competitive power of our company in this competitive market”. According to Daimler, growth in Brazil reached double digits last year, following the economic downturn of 2012 and in contrast to similar emerging regions such as India and Russia, where market volumes were “significantly lower”. While noting that demand has been “very volatile” in recent years, partially due to government buying incentives, the OEM believes the market will benefit from expected economic growth in the medium term.

Fluctuations in sales notwithstanding, commercial vehicles (CVs) are the backbone of the Brazilian economy. Since the rail network is chronically lacking in investment, the majority of goods are transported across the country’s vast distances by CVs; Mercedes-Benz puts this figure at slightly over 60%, compared with just 15-20% for trains. In parallel to the heavy-duty trucks making inter-city journeys, there is also considerable demand for light commercial vehicles (LCVs) to cater to the needs of small businessmen operating in congested cities, which has led to several OEMs expanding manufacturing facilities for such models within their larger production footprints.

"Mercedes-Benz stands out as the only company to act in all segments of mobility in Brazil, with cars, trucks, buses and vans"
– Philipp Schiemer, Mercedes-Benz Brazil

The first Mercedes-Benz plant in South America – also the first outside Germany – was actually established in Argentina, in 1951. Today the 1,783-strong workforce at the Buenos Aires facility assembles bus chassis plus NCV3 Sprinter vans, some of which are exported to Brazil; last year around 19,600 Sprinters were sold in Latin America.

In 1956, the company set up operations in Brazil at São Bernardo do Campo, and this is now its principal site in the region as well as being the largest Mercedes-Benz CV plant outside Germany, with 480,000 sq.m of constructed space on 1m sq.m of land. The plant has its own 17,500 sq.m press shop for cabin components, plus a product engineering department, and there is not one but two assembly halls.

São Bernardo do Campo, which employs around 11,000 workers, plays a part in producing the entire Mercedes-Benz truck range for Latin America: the Atron, Atego, Axor, Accelo and Actros (the last two undergoing final assembly at Juiz de Fora). It also makes engines, transmissions, axles and bus chassis. Since the start of operations, the plant has produced over 2m CVs, including 1.4m trucks and 600,000 buses and bus chassis; however, the OEM is not willing to state the current annual output.

Mercedes-Benz’ production focus on CVs within South America was intensified between 2010-2012, when the Juiz de Fora plant was converted from the manufacture of cars to that of Accelo and Actros trucks. Although last year Daimler announced a €170m investment for a new 200,000 sq.m car plant on 2.4m sq.m of land at Iracemápolis, São Paulo State, this will be for assembly only.

Nonetheless, when it launches in 2016 with the capability to make up to 20,000 next-generation C-Class and GLA vehicles per year, the new plant will justify Schiemer’s claim that: “With the local production of cars, Mercedes-Benz stands out as the only company to act in all segments of mobility in Brazil, with cars, trucks, buses and vans.”

A good kind of U-turn
The final assembly line which AMS visited at Mercedes-Benz Trucks, São Bernardo do Campo, is based on a U-shaped formation: frame and chassis assembly on the first length, a short crossover area and a final stretch incorporating axle and cabin assembly before trim and finish. There are 32 stations each around 14 metres long, with a takt time of 4.5 minutes; the velocity of the line is 13.3 vehicles per hour. The 20,000 sq.m hall operates one shift between 6am and 3pm, with 90 vehicles produced per shift (ie per day) and a maximum of 95.

This line assembles a mixture of medium and semi-heavy-duty trucks (the Atron and Atego respectively); another line in an adjacent, 12,000 sq.m hall assembles the extra heavy-duty Axor, operating on two shifts and turning out 40 vehicles per day (owing to the greater complexity of the model, the takt time there is 19 minutes).

Marcelo Finato, production engineer for final assembly, says this mixture in the first hall has implications for the staffing of the line, with additional personnel needed for the larger models and fewer for the smaller versions. For each shift, there are 90 workers in the hall, with another 50 in the basement handling pre-assembly; there are 110 in the second hall.

The pre-assembled components include the engines, transmissions, axles and seats, made by Mercedes-Benz on-site and delivered by trucks just-in-sequence (JIS). External suppliers for components such as long members make their deliveries mostly just-in-time (JIT) to the storage area just outside the assembly hall which is managed by the Logistics department.

According to Erodes Berbetz, the new head of procurement for Mercedes-Benz Brazil and Daimler Latin America, the breadth of the company’s product range creates “more complexity” in its supply base compared with some competitors. The fact that Mercedes-Benz Brazil makes some components in-house necessitates the additional management of raw materials such as steel, although it does enable greater flexibility and control in production, as well as meeting criteria for the government’s automotive programme, Inovar-Auto. As with most vehicle-makers, Berbetz says Mercedes-Benz Trucks is “always strategically thinking about having more local content”, although he adds that this level is already “very comfortable” because the supply base in Brazil has been supporting Mercedes-Benz for 60 years and comprises global players.

About 15 years ago the assembly hall at São Bernardo do Campo kept large amounts of inventory, but Finato says this is now “much reduced” and that only two shifts can be supplied from stock. In fact, the facility has operated on the basis of Kaizan lean production methods since 1993.

Carefully does it
At the start of the assembly process, the long members are lifted into position by overhead cranes; the cross members are then added, followed by the suspension, plus pipes and wires. At this point, the chassis is stamped with an identification number determined by a computer system which has replaced a previously manual selection.

Overhead cranes take the chassis across the bottom of the line’s U-shape, so that they can progress along the second leg to receive their axles and cabins. Despite the immense size of the components involved, these are quite manual processes. However, robots from ABB are used elsewhere on the site to weld the cabins, while the painting which occurs in a corner of the assembly hall is automated by Dürr equipment (with the exception of the interiors). 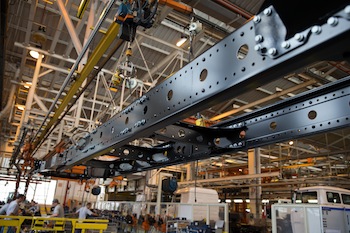 Mercedes-Benz Trucks does not build the bodies of its CVs; clients buy the cabins and send them to third-party bodybuilders. The OEM previously built bodies for buses but this aspect of production became too expensive and was halted.

Although overhead lifting gear lowers the cabin onto the chassis, it is manoeuvered into position by a team of workers, in one of the most crucial actions in the entire assembly operation. The cabins are delivered to the appropriate point in the line by 11 automated guided vehicles (AGVs) following tracks on the floor; a worker attaches a harness to the cabin so that it can be hoisted overhead, seemingly precariously, and then the AGV is released by the worker pressing a button. Some degree of risk is involved here, and so this operation is entrusted to the more experienced team members – as is the lead role in positioning the cabin.

Moving now on a ground conveyor, the trucks then have their wheels attached; these are all pre-assembled by Pirelli, even when the brand is Bridgestone. Finally, the engines are started, the steering and brakes are tested, and any errors are solved during final revision; all test data is fed into the computer system. There are three quality gates in the assembly operation: the first for the chassis, the second for the engine and the third for the final product.

For Berbetz, quality is key in South America’s growing market. “We have new truck manufacturers arriving, particularly in Brazil – which is good,” he says. “I think this is bringing more demands from the customers; they want to have better products.” As competitive as it already is, the trucks market in South America looks set to get even more commercial.