By strengthening its focus on quality, the OEM aims to keep its 44% market share despite more competition 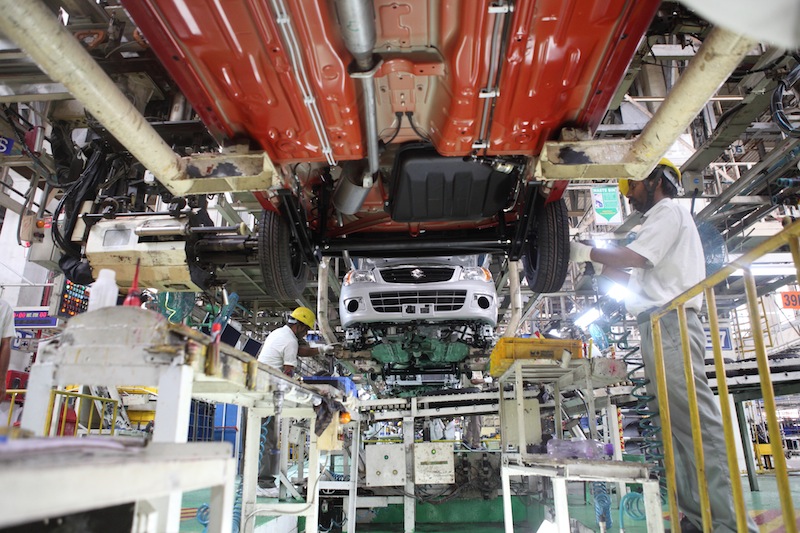 With sales of over 1.15m vehicles during 2013-2014 – encompassing hatchbacks, sedans, vans and SUVs – Maruti Suzuki is by any standards a major carmaker. As its name indicates, Maruti Suzuki is a subsidiary of Japan’s Suzuki Motor Corporation, which has a 56% stake; as a listed company, the rest of its shares are owned by the public. Chief mentor MM Singh, who took up his position this year after a decade as chief operating officer for production, says that total capacity across the company’s two factories is 1.5m vehicles per year; the target for 2014 was 1.13m.

The two plants are at Gurgaon and Manesar in the State of Haryana, south-west of the capital, New Delhi. The former was set up in 1983, when the company was still a purely Indian-owned business; the latter is much newer, having launched only eight years ago. In addition to vehicle assembly, there is some engine and transmission production. Gurgaon has five vehicle assembly lines and Manesar has three, with the latest having started operations in 2013. In terms of the installed production technology, Singh is confident that Maruti Suzuki compares favourably with any other vehicle-maker worldwide: “Globally we are on a par with everybody else”.

This is evident in the new ‘C’ line at Manesar which is used for manufacturing the Celerio, a model that incorporates a clever ‘auto gear-shift’ capability; a five-speed manual gearbox presents the driver with what appears to be an automatic transmission interface, thereby combining the fuel efficiency of the former with the ease-of-use of the latter. According to Singh, both the bodyshop and the paintshop on the C line are “100%” automated. He says that across the whole company there are 2,000 robots carrying out welding operations.

“Joint effort” between Maruti Suzuki in India and Suzuki in Japan is very much the watchword, reports Singh. That is certainly the case with basic vehicle design. Indian engineering personnel – there are now around 1,300 in the company – typically spend periods of one to two years in Japan, learning the methodology of the majority shareholder. Moreover, the design and development capabilities of the Indian operation have recently received a major boost with the opening of a new R&D centre, test-track and proving ground at Rohtak, also in Haryana.

‘Quality’ is another word that features prominently in Maruti Suzuki’s lexicon. Through the emphasis the company places on proactive employee involvement, Japanese influences are strongly evident; a well-established employee suggestion scheme is a prime example. Singh describes quality as the “number one focus” for the company, and a fundamental enabling strategy is that of facilitating “involvement across all levels” of the organisation. Ensuring quality is, he explains, “not a task that is confined to senior staff”. Moreover, just as responsibility and involvement are pervasive activities, so is the objective: “100% fool-proofing” in all production activities.

In addition to ongoing activities such as the suggestion scheme, Maruti Suzuki operates a stream of highly focused initiatives lasting for a month or so. One example of these “theme-based” initiatives, says Singh, is a ‘one operator, one step’ programme currently underway which is aimed at identifying procedures that can be eliminated or compressed into other procedures.

The initiative chimes with a more general emphasis on improving the ergonomic efficiency of shopfloor operations under the banner of ‘my mission, my responsibility’. According to Singh, the chairman of Maruti Suzuki, RC Bhargava, takes a very keen personal interest and indicates appropriate areas for attention. Further suggestions come from Suzuki in Japan.

All these efforts in terms of quality are now underpinned by an important internal restructuring of management procedures that has taken place within the last year and has involved the designation of quality as a ‘separate vertical’, ie a distinct area of responsibility with its own reporting channel direct to board level. Everything from overseeing internal activities to collating and assessing feedback from the market now comes under the same remit.

“Almost all the major global players are here now [in India] and so we have to make quality products that will sell. That is how we will sustain our market share"
– MM Singh, Maruti SuzukiThere is also an external focus, with a good deal of effort being devoted to developing quality awareness amongst Maruti Suzuki’s extensive supplier base. According to Singh, Maruti Suzuki currently has around 400 tier one suppliers and slightly over 5,000 tier two companies. The focus for the moment, though, is heavily on the tier ones.

Singh says the OEM’s interaction with its suppliers is continual; Maruti Suzuki sends its personnel to supplier plants to monitor their procedures and initiate improvement projects. As with the internal suggestion scheme, these methods are clearly influenced by techniques previously pioneered in the Japanese automotive industry. Singh acknowledges, however, that there is no quick fix in any sort of worthwhile quality enhancement programme. “There is a long way to go,” he states. “But we are heading in the right direction.”

Seeking sustainability
Environmental efficiency is another area of focus for Maruti Suzuki. Indeed, the company can already make some substantial claims of success in this regard. One benchmark that has already been achieved is zero wastewater at both plants – in fact, says Singh, that goal was achieved a decade ago. Additionally, 48% of all water used at the plants is currently recycled. In similar vein, the last four years have seen the company achieve 100% recycling of hazardous wastes, such as paint sludge, by sending them for use in cement-making. Last year, the company also made its first foray into on-site renewable energy generation with the commissioning of a 1MW solar panel array at Manesar.

The company’s efforts in the environmental field bear at least two distinct parallels with its quality-related initiatives. One is external and concerned with suppliers: an effort to ensure that all its tier one suppliers attain the ISO14001 environmental management standard. The other is internal and concerned with Maruti Suzuki’s own procedures and systems: a decision to accord environmental issues the distinction of their own board-level committee with a brief to oversee the implementation of relevant strategy.

Energy consumption is an obvious target that can be benchmarked and measured. The company registered a 5% drop in energy costs over 2013-14, according to its latest Sustainability Report. Singh says the savings generated on the shopfloor have originated from continuous localised efforts rather than from any single grand project – efforts that are nevertheless aided by specialist support. “We have a team going from shop to shop,” he states.

Cutting costs
Overall, Maruti Suzuki has reduced its manufacturing costs by 37% over the last seven to eight years. Efforts to reduce them further will continue, but Singh is realistic enough to recognise that finding further savings becomes more difficult as operational efficiency increases. Accordingly, the targets become more modest. “We used to look for around 5% savings a year; now we target 3%,” he explains. A number of areas have been identified as likely sources of cost reduction. One of these is tool costs; another is indirect consumables, such as packaging; a third is general productivity. 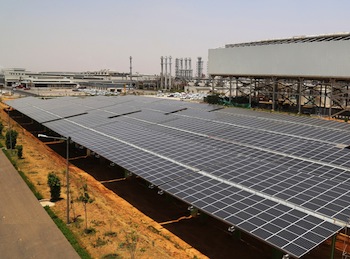 Localisation is now another high-profile theme at the company. As Singh explains, the objective is to source as much content as possible from within India in order to avoid financial losses due to currency fluctuations. There is a set of targets with a number of priority areas; Singh confirms that tools and dies feature highly on the list and that the company is looking to tap in-house resources more thoroughly as part of this strategy.

Another target for increased efficiency is materials handling. Singh says that an initiative to increase the use of automated guided vehicles (AGVs), which are made in-house, was started seven years ago but fell into abeyance; the scheme has now been revived. A small team has been formed from within the company to develop new materials handling solutions for specific applications on the shopfloor. This use of internal resources seems to be paying off; Singh says that the 44 individuals dedicated to materials handling initiatives generated savings worth $4.28m in 2013.

As Singh explains, in-house solutions tend to be markedly less expensive than those involving bought-in hardware. For instance, he estimates that the self-made AGVs cost the company 30-40% less than off-the-shelf products from an external provider. He says in-house automation will play a major role in helping the company to achieve its overall target of a 20% reduction in capital expenditure over the next few years. Areas earmarked for further attention include materials handling in casting shops.

Tackling the immensity of India
At the other end of the production process, Maruti Suzuki has identified finished vehicle logistics in its vast domestic market as an area where efficiency improvements can be made. To this end, it has already cooperated with Indian Railways in the development of a new type of railway transporter wagon which enables cars to be loaded and offloaded faster than before, as well as to be packed more tightly. The ‘Flexi-deck auto-wagon rake’ designed by Indian Railway’s Research Design and Standards Organisation makes provision for a third car-carrying deck and can therefore transport 318 cars, providing 20% more capacity than the current twin-deckers.

Maruti Suzuki took delivery of three rakes, each of 27 wagons, in March 2014, when it became the first carmaker in the country to possess its own such rolling stock. Apart from their capacity and efficiency, another important attribute of the wagons is the speed they can attain when fully loaded – at 95kph, only 5kph less than the maximum when empty. This means they can transport a consignment of vehicles from Gurgaon to Bangalore in just five days – two days fewer than by road. As Singh points out, this has the additional benefit of making the overall transport system more environmentally friendly, with a significant reduction in CO2 emissions. 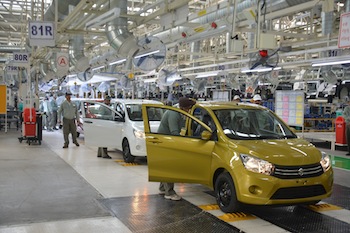 According to Singh, Maruti Suzuki takes nothing for granted – and certainly not that it will enjoy any particular advantage in its home market simply because it has significant Indian ownership. At the moment, the company has around 44% of the market and is undertaking a major project to ensure that it at least retains this share as the market grows; a new plant in Gujarat is scheduled to come on stream in 2017. Singh says that when it does, the company should be able to think in terms of boosting its production volumes to around 1.7m vehicles per year initially, and later as many as 2m.

But Singh is well aware that mere numbers will not be enough. “Almost all the major global players are here now and so we have to make quality products that will sell,” he observes. “That is how we will sustain our market share.”