A well-educated workforce within a tried-and-tested process model enables the GAC FCA plant at Guangzhou to achieve rapid ramp-ups. AMS went to the WCM-designed plant in China to take a look at the production 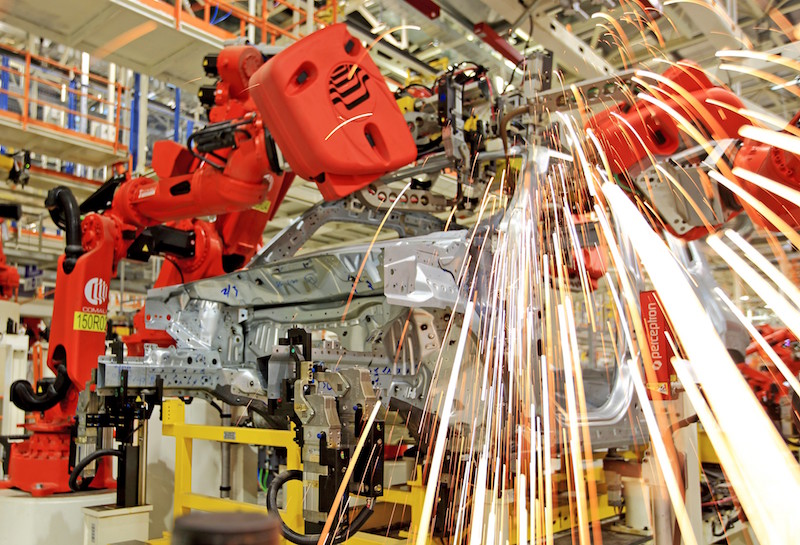 In April, 2016, Jeep Renegades began rolling off the assembly line at a brand new plant in Guangzhou, China. The launch marked a further local production milestone for the joint venture between Chinese automotive giant GAC and FCA just six months after the SOP of the Jeep Cherokee at Changsha.

The GAC FCA Guangzhou plant is located within the expansive manufacturing base of the GAC Group’s passenger vehicles in the Panyu District of Guangzhou, southern China. A joint effort between the two partners, the facility was built with a standard production capacity of 160,000 vehicles a year and designed to FCA’s World Class Manufacturing (WCM) protocol. As such, the plant features an advanced process layout, production equipment and an environmental management model. The factory comprises workshops for stamping, welding, painting and general assembly, as well as a standalone quality assurance centre.

WCM – a common languageThe deputy general manager at the plant, Oscar Barradas, says that each JV partner is keen to take a mix of best practice from both parties, and WCM is crucial: “The plant is designed completely with FCA methodology, using the WCM. GAC is fully committed to and embracing WCM because they realise it’s producing benefits.” FCA sees WCM not as a project, more as a programme that tackles all types of loss and breakdown. The objectives include improving quality along with achieving a level of standardisation that allows the methodologies to be transferrable across a global network of manufacturing plants. In support of this, FCA runs hundreds of audits throughout more than 174 facilities worldwide. This includes the FCA sites and CNH Industrial, manufacturers of commercial, agricultural and speciality vehicle brands, such as Iveco, New Holland and Steyr, among others.

Inspiration in the bodyshop

The 60,000 sq.m bodyshop at Guangzhou was designed to mirror European facilities, and to a specification set by the more advanced FCA plants – in particular, Melfi in Italy. Luo Wenzhi, director of vehicle manufacturing, says: “In the planning stage we visited other plants. All the equipment and processes have been done to European standards. So there’s probably a big difference from Japanese carmakers.” Just as with the assembly processes, the WCM protocol is applied throughout. Welding applications feature spot, MIG and MAG, stud and laser as well as laser brazing. Other joining techniques include glueing and roller hemming.

The adjacent press shop supplies the components using metal sourced completely from within China. Aluminium and high-strength steel (HSS) makes up the majority of the body structure (70% in the case of HSS). One supply still sourced from Europe is sealant. Luo hopes to find a more local supplier at some future stage but for now the quality of the product from Europe cannot be matched.

The bodyshop process flows to a finishing line located at the opposite end of the building from the paintshop. An outer lane running the entire length of the bodyshop offers an ideal buffer.

WCM is a common language, as FCA puts it, used throughout the well-established manufacturing base it runs in North America and Europe. The methodology focuses on reducing waste, increasing productivity and improving quality and safety in a systematic and organised way. The aim is for processes to grow and refine themselves using the contributions of all who are involved day to day.

The turnaround from the start of construction on the facility to building the first customer car was 17 months: “Perhaps one of the fastest greenfield projects ever, it was amazing. But this isn’t the most outstanding point,” Barradas says. “I still can’t believe how fast we launched. One product in April 2016, a second in November and then one month later we launched a second shift.”

Barradas pays tribute to his team at Guangzhou, who did everything that was asked of them despite such an ambitious timetable. “We were ramping up on the Compass and at the same time we were ramping up a second shift. It may seem crazy to schedule a launch like that but we prepared the team, prepared everything. Now, every month we are achieving the sales requests 100%. Not a single unit lost.” Since March 2017, the plant has been running two shifts and completing 45 jobs per hour for the Compass and Renegade models, but is ready for 60 jobs per hour.

Paying attention to ergonomicsAnother aspect that FCA has brought to the partnership is careful thought about ergonomics. Barradas says, “Simple devices support the operators, avoid the muri, avoid putting the operators in difficult positions. This makes it easier for operators so they can just concentrate on the quality of the task and not get distracted through feeling tired.”

Barradas wants to ensure that the concept of muri, synonymous with manufacturing in Japan, has as much prominence here in southern China. One muri innovation used by several assembly line workers is a small stool, with castors on the base and an extended upright back support. It is a curious-looking, almost ground-level seat but one that allows the operator to work low down on the car body. They can remain seated straight, not straining to hold position as well as being able to scoot across the station as the car is conveyed through. The stool seats are also fitted with pouches to hold the tools needed at the takt. The operator stays mobile without having to equip a belt to keep tools within easy reach.

Comparing features such as supermarketing, buffering, in fact all logistics, Barradas see strong similarities to what is found in North America or Europe: “The plant doesn’t have that much space so we run a lot of just-in-sequence and just-in-time time supply practices following the recommended flow for each part, cost and variation range."

Kitting is a concept that is growing in China, Barradas says, and is an aspect that WCM emphasises and encourages to attack losses. Meanwhile, the automation level is similar to Mexico or Europe. Barradas explains: “In this place, the investment is not like that of other FCA plants with rotary hangers, for example, but that’s an expensive installation. However, the requirements to protect quality, we have.”

Education levels among the team are high, with many of the leaders possessing a bachelor’s degree

Benefitting from educated workersBesides the equipment and process, Barradas is extremely impressed with the teams working at Guangzhou. “The manpower here has a very high educational level. All the operators are high-school or technical-school educated. They are able to do the kaizen [ongoing improvement] by themselves. At the end of the shift we’ll run the report. Every single second the line is stopped, we need to figure out why. We analyse losses, we analyse muri, and make a business case if we need to.”

With 15% of the team leaders possessing bachelor degrees, Barradas sees them doing standard and major kaizen. The analytical minds are there, with a genuine interest and ownership of what they are doing. “It’s a luxury to have this. We can’t achieve this in many places. For example, in Mexico a guy leaving university with a bachelor’s degree would not want to be a team leader working on the line. Here, it’s not a problem. When, one or two years later, a team leader becomes a supervisor, they already have a feeling of the operation and they understand how to support the flow. It’s one of the amazing things about this place.”

Across the board in assembly, six-monthly competence certification grades are available for the operatives to attain. There are opportunities to pass from the entry A grade to the more aspirational AA grade operator level to work on critical operations for safety feature assembly. There’s a strong sense of competition, Barradas says.

The success and progress Barradas describes is also recognised by GAC. Its management sees the plant as a solid foundation for the JV and the WCM protocol as an example for a wider constituency. Zhang Fangyou, the former chairman of GAC, says: “The Guangzhou plant, without a doubt, will further accelerate the development of not only GAC Group, but also the whole automotive industry here in Guangdong Province.”