SPA in the DNA

Rising global demand for Volvo vehicles and the arrival of models using the SPA platform is having a considerable impact on the company’s Torslanda plant. Michael Nash investigates 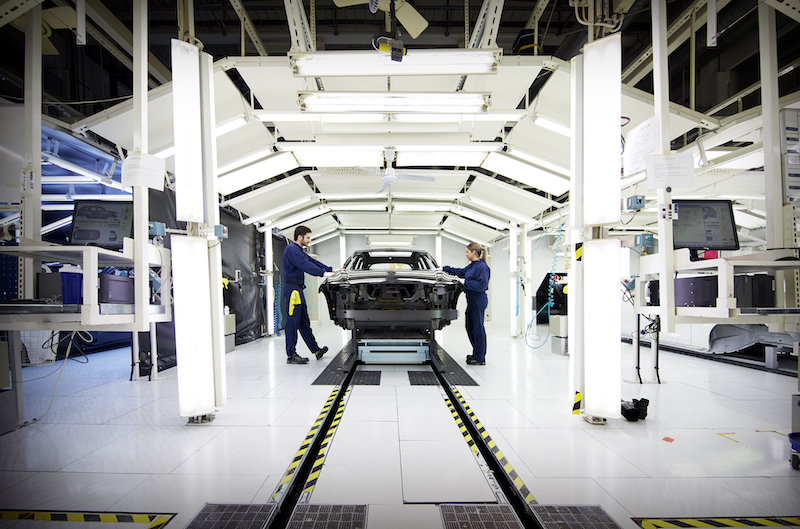 As they typically employ thousands of people, mass-market vehicle production plants often have a significant influence on local and indeed national economies. But it’s not common for entire cities to be noticeably dependent on a single car manufacturer and its facilities.

Sweden’s second largest city, Gothenburg, is located in the south-west of the country, close to the the Kattegat bay. It has the biggest port in all of the Nordic countries, with over 11,000 ships visiting per year from over 140 destinations around the world. This makes it an ideal location for a car manufacturer that exports vehicles all over the world. Volvo Cars, which is owned by China’s Geely, has become the largest employer in Gothenburg, with around 6,500 people working at the Torslanda plant just outside the city.

The OEM’s influence on the area is immediately clear on arrival at Gothenburg airport. Passengers are greeted by bold slogans written on the walls to accompany gleaming new models on show stands, and outside, every other car on the road is a Volvo, while billboards strewn across the city show the latest must-have models in the company’s portfolio.

“The Volvo companies have a huge influence on the city,” Claes Sundmark, vice president, business area cargo at the Port of Gothenburg, told AMS. “The combined mass of both Volvo Group and Volvo Cars as big employers creates ripple effects not only on the industry, but also on the service sector. Concerning the Port of Gothenburg, the numerous Volvo operations is the largest single factor on the number of shipped vehicles from and to the port. Volvo components are also very important concerning our intra-European roll-on/roll-off traffic. Both segments have done extremely well the last couple of years, much on account of the success of Volvo Cars’ recent model programmes.”

During the first quarter of 2018, sales at Volvo Cars were up by 5.7% in Europe, 23.3% in China and 49% in the US. The XC60 was the company’s best selling model globally, with 38,241 units delivered to customers. Magnus Nilsson, vice president of Volvo Car Torslanda, described how this growth in demand has had an impact on the Torslanda plant: “We used to make around 200,000 cars a year, and in 2017 we made around 234,000 units. But now we are on course to make even more cars. We had a really big breakthrough recently when we made over 1,300 cars in 24 hours.”

Before taking charge of the Torslanda plant, Nilsson worked as a site manager for body components at Volvo’s plant in Olofström, Sweden, and also as a bodyshop manager at its plant in Ghent, Belgium. This rapid growth in output, he suggested, has not been achieved before across any of the company’s plants. “There are so many people that have been working extremely hard to achieve this, and they are now starting to reap the rewards,” he added.

Several steps were taken that enabled this increase in capacity. The first, explained Nilsson, was in the paintshop. “Our paintshop was originally installed to do around 35 jobs per hour many years ago, and it was a huge challenge getting it up to 50,” he admitted. “Now we are hitting 60. There have been some technical rebuilds to make this happen, such as exchanged robots in top-coat painting, increased length of ovens and optimised pitch between skids throughout the whole paintshop flow, but it has mostly come from human development and teamwork between operators and managers.”

Torslanda now only makes cars that are based on the platform, which has allowed the plant to become more efficient across many areas – from assembly to logistics. “Both the bodyshop and paintshop have to run more or less every Saturday and Sunday to be able to follow the number of cars reaching final assembly,” Nilsson revealed. “This year, we haven’t been running any overtime in the bodyshop and paintshop if we haven’t run the same amount in final assembly. But we want the plant to become even leaner.”

The increase in capacity, however, has not just been possible due to investments in the paintshop and bodyshop. “It has also been made possible thanks to our human workers that are using new ways of working,” Nilsson explained. “When we talk about reducing cycle time and improving technical efficiency, we always immediately think of the robots. But I, personally, think the softer issue is most important – working with people and how to get them on board. Also, these people are on the shop floor and they know exactly what is happening. We have made sure that they don’t just do things because the managers tell them to do it – we want them to stand up and discuss the best way to do things, because this input is vital. In some countries and organisations, its more or less whatever the manager says goes, but that isn’t the case here.”

Nilsson describes his daily routine, during which he has several meetings with various plant management and operators. After getting an insight into the last 12 hours from the people in charge of bodyshop, paintshop, final assembly and logistics, he holds a meeting to review the last 24 hours at the plant. “We do this every day at 8.35am, focusing on issues such as safety, quality and delivery. Many of the support staff attend the meeting, as well as people from finance and HR. This is so important, as it means everyone gets a good flavour of the situation – the areas where we are having success and where we are having hiccups. They can then contribute in a much more proactive way and we can react accordingly.”

Although the latest robots and manufacturing equipment can help to make plants more efficient, Nilsson thinks they can no longer provide companies like Volvo with any major advantage over other OEMs. “That’s because if you go to any car factory in China, in North America or Europe, the technical solutions are all pretty much the same regardless of which OEM runs it,” he mused. “There are hundreds of ABB robots and the paintshop comes from Eisenmann or Dürr. So it becomes a bit like Formula 1, as we need to run these technologies in the best way.”

Therefore, Nilsson believes that the success of Torslanda lies with its workers, ensuring that they are being efficient and productive, and with contributions made by staff across various different departments. “I also think it is vital to close the gap between the operators and the plant management. Everybody should feel comfortable to have a discussion with me or with someone else in the management team to review steps and processes,” he stated.

Despite modifications in the paintshop, the installation of a new bodyshop and increased worker efficiency, Nilsson suggests that Torslanda has not changed significantly over the past few years. This is due to the fact that it has been producing more vehicles every year while simultaneously adapting to become a plant that only makes cars based on the SPA platform.

Ulf Nordelöf, senior director of industrial strategy at Volvo, provides more detail on this point. “Over the course of three or four years we have gone from making cars based on three different platforms to using just one platform, and have also launched five new vehicles, which doesn’t include the V60,” he recalled. “We have had the courage to do what the book tells you not to do – change the process, change the product portfolio and, on top of that, increase output. This is what is unique about the Torslanda plant when compared to other OEM plants and indeed our own plants elsewhere.”

With the introduction of five new models, Nordelöf suggests that Torslanda has been “in constant launch mode” for the past few years. Coupled with the increase in output, this has meant that there were no extended periods of downtime in which the managers and plant director could make major changes. “There just hasn’t been any opportunity for us to stop and do any fine-tuning while in launch mode,” he emphasised. However, with Volvo recently promising to electrify all models from 2019 onwards, Torslanda is likely to undergo some major changes.

Roughly one-in-ten vehicles travelling down the production lines is a plug-in hybrid electric vehicle (PHEV), but Nilsson expects there to be far more as Volvo’s electrified vehicle portfolio grows. In July 2017, Volvo announced that it would “go all-electric” by 2019, with all models incorporating some level of electrification. As well as offering mild hybrid variants of each car, the OEM said it would launch five pure electric vehicles (EVs) between 2019 and 2021.

Countless market research reports predict demand in electrified vehicles will rise significantly in the not-so-distant future. According to the consulting firm AlixPartners, EVs and PHEVs will account for two thirds of new vehicle sales by 2030. This will likely have a big impact on plants such as Torslanda. “If you look at the assembly time for combustion engines, as well as transmissions, its around six hours per unit,” observed Nick Parker, director at AlixPartners. “As you move forward into the hybridisation of the combustion engine, that increases to about nine hours. What this means is that, in the short term, the capacity [of plants] will need to rise to allow for the increase in man hours.”

“As we play that forward with EVs coming on board, we are looking at about four hours for the assembly of battery pack and an e-motor to go with it,” he continued. “That mix will have a huge implication on the current footprint of facilities. I think, overall, we are looking at about a 25% increase in total man hours by 2030 to meet the medium-term shift to hybridisation.” 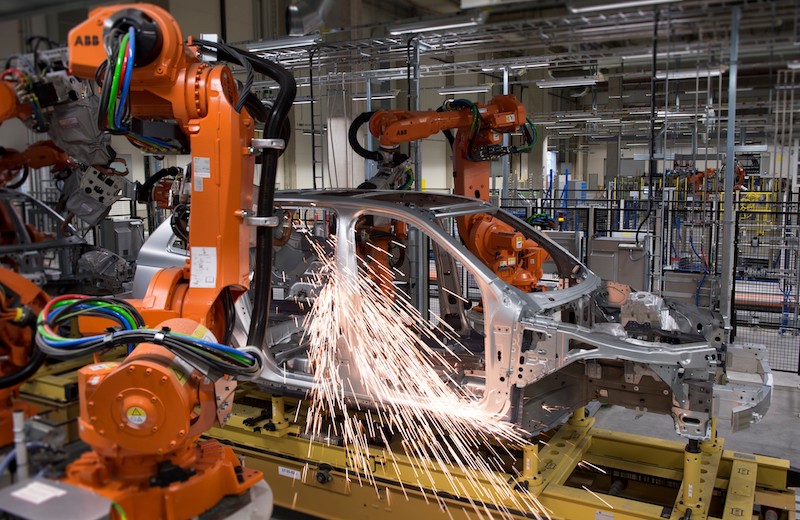 Difficulties could also arise in the paintshop with the adoption of multi-material vehicle designs. Many OEMs are looking at reducing weight in order to make cars more efficient, increase the range of their EVs and offset the weight of the batteries. Several have been turning to aluminium as a lightweight solution. “The properties of aluminium are different when compared to steel, and so it needs to be heated up slower and cooled slower, otherwise there will be deviations,” Nilsson clarified. “Also, the mixed-material design means that we will need different joining methods, from welding to adhesives for example.”

Looking ahead, Nilsson thinks Torslanda needs to be more flexible to cope with sudden changes in market demand. With the trend of electrification in mind, he commented on falling sales of diesel vehicles across Europe. “We have seen that there can be a sudden drop in the demand for diesels, and the same could happen for other types of vehicles,” he anticipated. “We need to be much more open and flexible to serve market demands, and what is true today may not be true tomorrow. This is having a huge impact on the high investment that companies are making in car plants, where the focus might be to roll out hybrids but the next day the diesel scenario might change. We try and envisage what the ideal plant is going to be like, but it is changing all the time.”

As well as being more flexible, he is also eager to make manufacturing at Torslanda more efficient: “It has taken so much effort to focus on delivering cars on the SPA platform and hitting record levels of production. Now that we are starting to deliver at a more stable level, it is time to improve efficiency. We are starting to use more resources to improve efficiency, and are now looking with new eyes to study processes and make them better.”