AMS met Ford’s vice-president for manufacturing in Asia-Pacific at its Shanghai headquarters to discuss the challenges the OEM is tackling in the region, especially through its JMC and Changan JVs in China 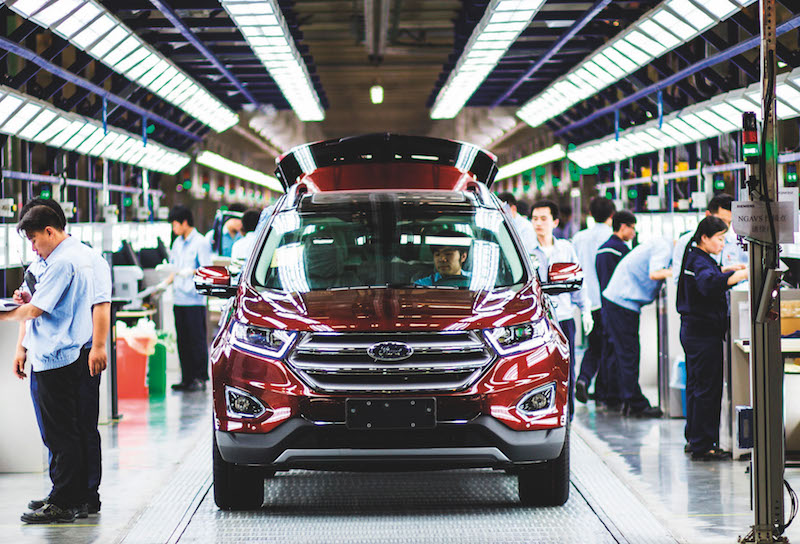 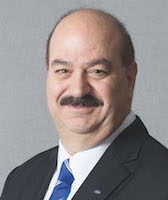 Bill Russo has been in China full time for a little over 18 months but in the automotive and engineering industries for more than 40 years. His career began with Ford, his first post-college job, and later he moved on to positions in the broader manufacturing sector, managed a plant at Chrysler and ran his own engineering company. He rejoined Ford in 2001 and has since taken on director roles within both vehicle operations and global powertrain manufacturing. “I’ve been lucky. It’s given me a very rich experience to look at things differently,” Russo explains.

“That helped me to see that there are many ways to solve a problem. Often when you have only had one career path or career company, you learn the company way of solving problems and to a certain extent that culture is very strong and it helps and protects the company. But sometimes it also focuses you so narrowly that you don’t see a bigger perspective.”

As vice-president for manufacturing in the Asia-Pacific region, a position he took in January 2016, Russo is using his experience and versatility to oversee facilities covering seven markets, with the capacity to produce 2.7m vehicles per year; the Chinese operations alone account for 1.4m.

Gareth Price (GP): It’s just over 18 months into your time in Asia. How would you characterise Ford’s activities here?Bill Russo (BR): Ford has been in China with its JMC [Jiangling Motors] partner since 1997, mostly in trucks and commercial vehicles, with a capacity in that segment of about 500,000 units. Those products have been well received. We are starting to introduce more SUVs. In 2001, we went live with our partner CAF [Changan Ford] and that’s got a capacity in China right now of about 1.6m passenger cars; 15 new products in less than five years and those products have been well received by the market.

I think when you come into a new venture anywhere, let alone a faraway shore for us and a little way away from resources, you always have that birthing issue. It takes time to get people up to speed, to get the systems tuned in. We have been fortunate there in that our bill of processing and bill of design are strong, so the systems are well proven; as we’ve installed them they’ve come up and run pretty close to flawless.

“We’re localising more and more – not only at the tier one [level] but, importantly, also at tier two and three" – Bill Russo, Ford

The biggest challenge, then, was the education and transformation of personnel. The workforce here in Asia is very disciplined; that’s a big advantage. Our processes not only teach how but why. You build upon that knowledge, they retain it and the performance has really been good, both in terms of throughput as well as in terms of quality standards. We are producing, and have been for several years now, equal to anywhere we do in the world.

Hangzhou is one of four CAF locations in China

Now we are looking for the next opportunity as the Chinese government allows us to begin to export. We’ll be looking at those opportunities here as well; and I don’t mean only to Asia, maybe to the more mature markets.

GP: Older plants in Europe often struggle for space. Is that less of a problem in a vast nation like China?BR: Space is an advantage and a disadvantage because incremental space is, in fact, waste. You’ve invested capital to have it and generally you find something to put in it, which isn’t always helpful. For me, to have tighter factories is better. What it has allowed us to do is grow the product portfolio in terms of complexity, in the plants, but even I would say that largely our plants are probably a little bit too big. That’s driven by compromises with the joint ventures as well. So we’re working through that. Fairly efficient, certainly as good as anywhere else but not where it could be.

GP: China’s market is clearly not as mature as other regions. How does that alter your approach?BR: In the more mature markets you learn your supply base, the routes and where your risks are in seasonality. Here we have added constraints, such as the waterways closing for dam reconstruction or something like this. That’s a natural part of what we’re learning. We’ve still kept probably higher levels of inventory than what we would normally keep. From 2016, we began to take those levels down based on supplier performance, better understanding the logistics and the seasonality issues that might exist.

We’re localising more and more, not only at the tier one [level] but, importantly, at the tier two and three. There’s lots of ways to say you’re local at the tier one when you’re really not. You really want to manufacture locally, for several reasons. Obviously, it’s less freight; it’s less cash in the working process, in inventory and your predictability is better. Then you can start to tighten your inventory, which is the process we’re in right now. That will probably take two or three years. Our current road map is to be as tight if not tighter than elsewhere in the company. We’ve opened up a global data analytics database for all the logistics routes, constantly optimising that in near-real time.

GP: There’s a similar imperative for production facilities to address energy. What measures are you taking?BR: In many of our locations now, not necessarily China, our energy costs are actually more than our wages. Energy, in some areas in Asia, is our number-one cost. So energy and the environmental metrics are critical for us. We’ve got a process, part of our Ford production system, ‘Best in Ford’, for best practice and replication.

So for a powertrain plant making blocks, crankshafts, heads, etc, we understand the energy footprint of those assets. We’re working continually to refine that. For example, a cutting tool; does that chip conveyor need to run 100% of the time? Does that air extraction need to run 100% of the time? Can I take the spindle speeds down between works? Down at that level, you would be surprised at what you can accomplish. In the powertrain area, I’ve seen over the past six years us taking our energy uses down in the plants by 65%. We still have plenty of things we’re working on.

Plant by plant, we look at the subsystems they have and what are the standards in that to get to ‘Best in Ford’? We’re constantly rapidly replicating those standards across the plant.

“It’s not so hard to make mechanical systems work; the real secret is making the control systems run and operate together and within the factory systems” – Bill Russo, Ford

Similarly, we do the same thing in vehicle plants. Our big energy user is, of course, the paintshop; ovens, a lot of gas uses, conveyance systems. We’re doing things with booth balances, air houses, pump systems and reduction over the past five years is significant. That’s the facilities side, then there’s the energy operating system that mostly relies on efficient shutdowns. 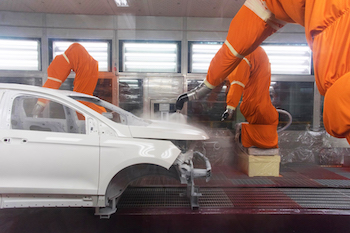 Ford is examining the energy use at its plants, system by system

Between shifts, is everything off? At weekends are all areas that we don’t need to operate off? Do we have leaks in our air compressor system? Largely, we use electric tools but we do have some pneumatic systems and we are trying to convert them over. On the cooling power, is there a better technology? Why do I have this evaporative water waste? On pumps and the chemical management etc, we’re really working system by system as to how we take energy out.

Every plant has an energy map which means that we can tell, by subsystem, what its peak loads are, what its average loads are and what does energy mean when it’s shed? In our manufacturing 4.0 efforts we’re creating controls to keep that data up, consolidated on a dashboard so that we can look at assets running and, if they don’t need to be on, get them turned off. That’s only a part of what we’re trying to do with manufacturing 4.0. We’re also taking these lessons to the extent that the supplier base has an interest because if we can help them reduce their cost we should benefit from that.

GP: Does the age and condition of your facilities help to achieve Industry 4.0 objectives?BR: Compared to the US, for example, the facilities aren’t as new but we are renovating with every programme. At CAF One [at Chongqing], which is our oldest facility, last year we made significant investments to upgrade the paintshop. As we put the next couple of programmes in there that will get us back up to a full Ford standard. Similarly, as we’ve been putting in new programmes into JMC [at Nanchang], whether it be our SUVs or our next-generation commercial vehicles or passenger carriers like the Transit Tourneo, those systems are all being elevated. We do that for two reasons. We’ve got one quality standard, so they have all to be the same quality standard, inclusive of things like paint technology. We are seeing customers showing up in the commercial sector more demanding than in the days of just a plain old white truck.

The paint technology is changing. We are looking at a new technology right now in Thailand that we are about to come to an agreement on this year. We are going to move more quickly with that because it’s more energy efficient, you get a nicer depth of appearance; we are excited about these technologies. There aren’t necessarily less material costs but they perform better, they are better energy-wise. 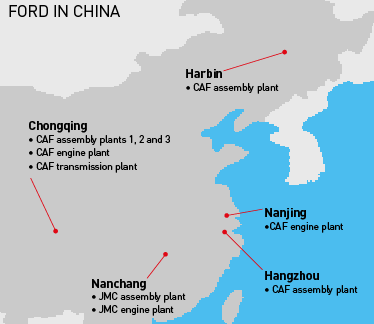 GP: Besides energy efficiency, is data assisting other functions that you oversee?BR: It’s not so hard to make mechanical systems work; the real secret is making the control systems run and operate together and within the factory systems. Our next opportunity is to take the data and to interlink the systems. For example, why don’t I know, sitting in Hangzhou in the trim/chassis final area at the glass cell, how the rest of the world’s Ford glass cells are operating? Do they have faster time to repair, or they have longer time before failures? Are they running at a higher speed, what materials they are using, how do I optimise my cost? When you have that data in front of you and you have any competitive nature at all, you’re going to look to make those improvements.

Here’s one example: our supplier base. We have control plans operating in there, but at the same time we’re not bringing that data in line, why not? Why not be looking at the same data set together and predicting: “hey, it looks like you are starting to get off the mean here. You may want to go and check that”, or if your system seems to be running slower. All this data is available. We haven’t regressed the data to be meaningful to both parties. Obviously, that would mean a different relationship with our supply base. It’s got to be more of a true partnership than a parent/child relationship.

We also can work together on levels of inventory because we’ll have visibility and we can communicate to them, “hey our mix may be changing, slow down”. Why do we have to have months to make that adjustment? There are ways to be more efficient and the data is there. We have got to connect things and we have got to begin to work in a different way, truly as a partnership.