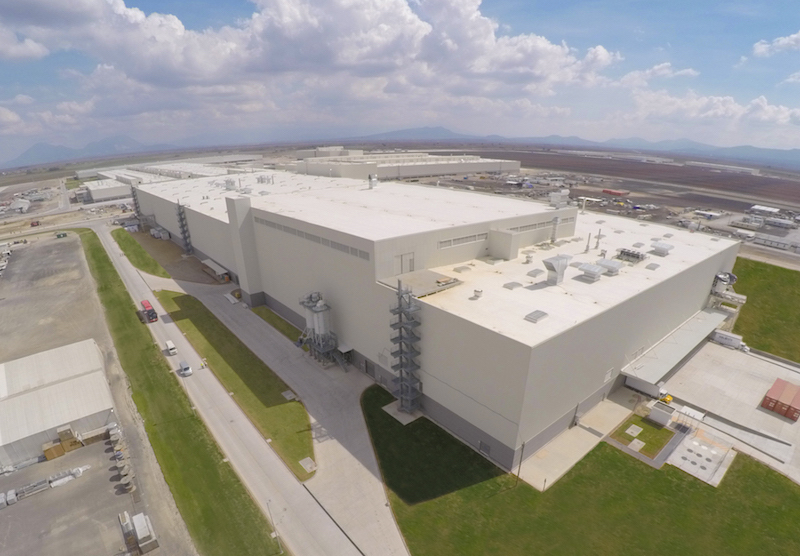 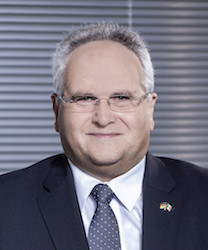 Joanne Perry (JP): San José Chiapa is Audi’s first factory in Mexico – and North America. Can you elaborate on its significance?Alfons Dintner (AD): This plant is a major building block for the Audi production network worldwide. One, because we are very close to the United States, which for the Q5 is a key market. Two, because this is the first plant on this continent and the first outside Europe that is 100% Audi, and the Q5 will be built here for the entire global market.

The Q5, out of all our line-up, is the most successful Audi model in the United States but it’s only about 20% of the plant’s output that is going to that market, as the Q5 is a successful model worldwide. A major share goes to Asia and Europe as we have three pillars in our strategy: Europe, Asia and North America.

Furthermore, here we have the first CKD – completely knocked down – packaging centre that Audi has established outside Europe. This shows again that the approach for the Q5, the production and all the installations, is worldwide.

Its strategic position is also the reason why it is a full plant; this is not just an assembly line and CKD packaging, it’s everything – press shop, bodyshop, paintshop, assembly, a full set-up – and by the end of the year we are aiming to contract 4,200 local employees to make this a fully functioning plant, including the CKD packaging.

JP: You were appointed to project manage the establishment of this new Mexican factory. What was the most difficult aspect?AD: In the VW Group and of course in Audi we have been used to working internationally for quite some time, so that wasn’t the challenge. We do, though, measure ourselves with one standard worldwide which we call ‘Made by Audi’ and the challenge is to implement our very strict Audi Production System, APS. To do so, we learned a lot from other experiences we had. The first step we took was to move into the training centre, which at 20,000 sq.m is the biggest and most modern outside Europe.

We took a two-pronged approach. One is that 750 specialists we recruited were sent to Germany and trained in our headquarters [Ingolstadt] where the current Q5 is being built, so they already saw what the production line looks like. The second is an onboarding process and continuous classes. It’s not an accident that the training centre was finished almost two years ago and, even though we’re not done recruiting, there are classes every week and this place is running at high capacity. We have to embed and establish this worldwide standard called ‘Made by Audi’ here in Mexico.

"We have to embed and establish this worldwide standard called ‘Made by Audi’ here in Mexico" – Alfons Dintner, Audi México

Three years ago, we started our apprenticeship programme, which is built on the German model of dual education – schooling and on the job – and up to this point, 350 people have completed it. Some of them were educated at VW in Puebla, but now that our training centre has been completed they are doing their training here, close to the plant.

Our first employees in Mexico were actually representatives of Human Resources and what they did was immediately contact all the universities in Puebla and set up special programmes for students with the highest merits. One example is the EMA [Estudiantes Mexicanos en Alemania] programme. This is 18 months where Audi pays everything – tuition, travel costs, housing. It’s a guarantee – if you do the programme with us, you get a job here. Overall, 230,000 Mexicans applied for jobs with Audi.

JP: Why was Puebla seen as the most suitable location in Mexico?AD: VW has more than 51 years of experience here, so it’s tested ground. But we think of it in terms of German engineering – because a lot of suppliers are already in this state, German engineering has been established here for a long time. Therefore we know the structure of suppliers, which suppliers exist, which others we had to invite and motivate to make sure that they are here to meet the requirements that make us special as a brand.

But also, Puebla has a strategic position within Mexico. You have two ports serving the east [Veracruz] and the west [Lázaro Cárdenas]; multimodal transport connections, roads and a very good rail system. We save two weeks of delivery time to the United States. We also think of Mexico as a strategic position because we deliver to the north and the south, and with those two ports we can serve Asia, which is a very important market for us, and Europe, our homebase.

JP: What proportion of suppliers are shared between the new Audi plant and VW in Puebla?AD: We recruited 180 suppliers for this project and 64 of them started to build their own plants here for Audi. It’s our daily task not only to check quality within Audi but to ensure that the quality at all our suppliers meets Audi standards. So, talking about challenges, it’s not only one factory – it’s 65 at least! There is a prerequisite by law that we have to achieve at least 60% local content. We are already at 65%, therefore yes, we are sharing some suppliers with VW. In the medium to long term, of course we are going to expand the local content, but we are not going for local content at any price.

We are currently also finishing our just-in-sequence park next to the plant. At the same time, suppliers in our vicinity are building their own park. For us and the suppliers it’s a win-win situation because the route between us is so short – there are even train tracks that lead directly to our distribution centre within the plant. Also, the government of Puebla is lobbying for more suppliers to settle down either close to Audi or VW.

JP: Which components are currently being imported?AD: Rear axles and front-ends are some components that we do locally but there are some things that are so specifically Audi and so complicated that we still want to manage them ourselves – the cockpit would be a good example. Some parts of the engine are localised but the bigger chunk comes from Hungary – Győr, our biggest engine plant worldwide – or from [VW] Silao [Guanajuato, Mexico]. 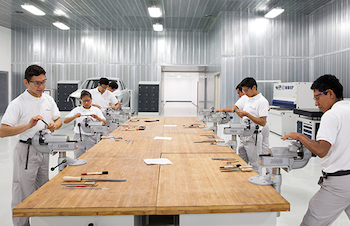 The training centre was established two years before the plant

JP: Given the number of vehicle-makers arriving in Mexico, especially in the premium segment, will suppliers struggle to keep pace with demand?AD: Simply said, an advantage of ours is that we’re first. Our network is established and we are at a very good point. In 2011 we made the decision to build the plant and in 2013 we laid the foundation stone, now it’s 2016.

There are quite a lot of studies suggesting that Mexico will advance to sixth place for automotive manufacturing worldwide and we even think that this might not be the end of the success story. The challenge really is a Mexican one and we see how much officials and institutions here are doing to attract more investment. We are not only talking about automotive logistics but also just the expansion of street networks. The government is building a model city for up to 120,000 people about 800 metres away from the plant, with the first phase to be completed in just two years!

JP: How will you ensure that the Mexican-made vehicles are of the same quality as those made in Germany?AD: The training centre; the fact that we sent 750 people to Germany for extensive training; the more than 400 German and international expatriates onsite supporting us, some of them with experience of over 20 SOPs [start of production] of different vehicles; a thorough recruitment process; very close contact with the established network of VW as well as our own suppliers; the suppliers qualification programme; and visits from our purchasing department as well as quality engineers. We have full quality laboratory equipment here to make sure that materials provided by our partners, but also the cars produced here, meet our worldwide standards.

With this greenfield project, we also have a factory that allows for perfect processes. Unlike the organic growth of some factories over the years, we have built this one from scratch and planned it digitally – it is a Smart Factory. The CPU [central processing unit] that helped our planners in developing this site has 12,000 processors. The average PC has eight. That really shows that the planners in Ingolstadt could look at every little detail of the plant even before starting construction. Only in that way can you build a factory of this size, this fast. It allowed us to optimise all the steps necessary for production and ensure that all the highest standards that we derive from our plants around the world are implemented.

JP: Does this new plant have any innovative technology which is not present in Audi factories elsewhere?AD: Everything we use here is Audi technology. For example, we have a press shop with a twin servo press which is the biggest one in the Americas – for aluminium as well as steel. We also have more than 670 robots in the bodyshop and those are of the highest energy-efficiency level that exists worldwide. If you look at our paintshop, it uses 60% less energy than the average paintshop.

There is not one technology that stands out, but what is unique is that we unite all these technologies which exist in one place or another in our worldwide network. One of the best examples is the central production station. Not only can you see what’s happening in the assembly line or in logistics or in IT, it connects all the different specialities within the plant. What’s really amazing is that people from plants within the Audi network can lock onto that central control station and see what’s happening. They can assist us, and we can see what they are doing if we need to assist them too.

JP: Do you see the factory developing into a production hub for crossover SUVs or will it be more like Audi’s Brazilian plant, which makes a mixture of sedans and crossovers?AD: At the moment we are focused on the successful production of the new Audi Q5. We want this thing to grow – our motto here is we are building the future. We are proud to be Audi México, and we’re doing it with ‘Passion’ for ‘Perfection’. 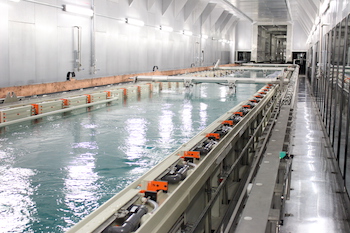 PaintshopSize: 65,000 sq.m on four floorsRobots: 23 for the PVC line and 67 for the topcoat (all Dürr)Automation level: 46%Environmental footprint: Claimed to be the most eco-friendly paintshop in North America, cutting water and energy by 60% and 50% respectively; 80% recirculated air

Training centreSize: 20,000 sq.mOrigins: Construction began in April 2013; opened October 2014Operated with the Technical University of PueblaOpen to suppliersMore than 1,500 personnel per year; over 300 apprentices by mid-2016; intake of 80 per year in future