A race for third place

India’s vehicle sales are booming to the benefit of a handful of established manufacturers, but it’s still a tricky market for those on the sidelines

Last year, India’s passenger vehicle market cracked 3m units for the first time, up 9% on 2016, according to data from Swedish analyst firm AID. That puts it on course to overtake Germany (3.4m in 2017) and towards the holy grail target of beating Japan to become the world’s third largest car market after China and the US.

With Japan’s car market exceeding 5m units last year, there’s still a long way to go, but analysts and manufacturers agree it’s going to happen, especially with Japan’s market likely to stagnate. Newcomer Kia, which is investing in a new factory in India, believes the country will move to number three as early as 2020 for passenger car sales, while the analyst arm of UBS banking group reckons light vehicle sales, including vans, will shoot past 5m in 2021; UK-based analyst firm LMC Auto forecasts a figure of 6.6m by 2024.

Coupled with India’s attraction as an export location, this potential growth makes the country a hot-spot for automotive investment. “An expanding middle-class, rising urbanisation and one of the lowest car penetration ratios make India one of the most promising automobile markets globally,” analysts at EY wrote last year in a report and survey focusing on the Indian jobs market. It noted that India still has one of the world’s lowest rates of vehicle ownership at 18 cars per 1,000, compared to 69 in China and 786 in the US.

Investment pours into production sitesAs mentioned, Kia has begun construction of a plant in the south-eastern state of Andhra Pradesh that is due to start production in 2019 with a capacity of 300,000 units per year. The 2.13m sq.m plant will include a stamping facility and paintshop, and will build a compact sedan and SUV, the company says. Total investment will stand at $1.1bn and the site also includes a supplier park. Kia’s sister company, Hyundai, India’s second largest passenger carmaker, plans to spend $780m in India over the next four years to launch eight new or updated models, LMC reports.

Market leader Suzuki is building a second assembly plant in Hansalpur, Gujarat state, a site with a planned capacity for 250,000 units, along with an engine and transmission facility, with 2019 start dates. A third assembly site is also being planned at a cost of $585m to take the firm’s capacity at the site to 750,000, which LMC calculates will push total investment there to $2bn. Suzuki is also investing with Toshiba and Denso to build a battery pack plant on the site at a cost of $179m. Suzuki and its partner Maruti already have two assembly plants in Haryana state, north-west India.In an effort to turn its automotive business around, Tata Motors will spend $624m – its passenger car business (not including Jaguar Land Rover) taking $390m and $234m heading to its truck business. Elsewhere, FCA has spent $234m to locate its new globally available Jeep Compass at the Tata-Fiat Ranjangoan plant, with sales starting in 2017. A new model is expected this year, LMC reports.

For India, Renault launched the Captur SUV based on the lower-cost B0 platform rather than the European version

PSA will spend $100m initially to build cars in a joint venture with CK Birla Group, the owner of Hindustan Motors. Production at Hindustan Motors’ factory in Chennai is expected to start in 2020-21. PSA also bought the rights to the Ambassador car name from Hindustan. Mahindra & Mahindra is spending $24m at its Pune vehicle manufacturing and Igatpuri engine plants to gear up for the launch of its U321 MPV project, expected later this year.

Chinese giant SAIC has confirmed it will take over GM’s Halol assembly plant and plans to spend $311m at the facility over the next five years to eventually build MG-badged cars there. LMC reports it will bring in five Chinese automotive suppliers – Yanfeng Automotive Interiors, Huichoung, Wuling Industry, LingYun Industrial Co and Sevic, which will invest $155m.

India’s challenging marketThe Indian passenger car market is working well for the established makers but for challengers it remains a tough place to be. Last year Maruti-Suzuki tightened its stranglehold on the market with sales up 15% to take a 50% share with an impressive 1.6m in sales. Second-placed Hyundai also saw growth with sales pushing past half a million, according to figures from sales aggregator Bestsellingcarsblog.com. Tata did well to grow its passenger car sales to just under 170,000, putting it fifth behind Mahindra and Honda, but Renault had a tough year, falling 15% from the year before.

Renault became the poster child of how to succeed in India after years of fairly fruitless persistence when it launched the Indian developed Kwid mini SUV in 2015. The key was low cost and high localisation, Renault said, but in 2017 Kwid sales dropped 13%, taking it out of the top 10. Indian buyers might crave low-cost cars, but they also want the latest thing. “It is very important for automakers to constantly refresh their products in India to remain competitive,” says Ammar Master, senior manager for LMC Automotive. Renault has recently launched the Captur SUV, a model based on the lower-cost B0 platform rather than the more sophisticated European version, and will launch a new SUV based on the Kwid in 2019, LMC predicts, that could stabilise the brand’s sales again. The move should bring Renault double-digit growth again, Master predicts.

General Motors has gone in the opposite direction, announcing last year that it will withdraw from the Indian car market altogether in 2018, leaving its Talegaon plant in Maharashtra as an export base to regions such as Latin America. GM was reacting to poor sales in the country for its Chevrolet cars, hence the pullout.

Its US rival Ford, on the other hand, has stayed put despite missing out on the market increase, registering just a 1% rise in deliveries for 2017 at 87,588, keeping it in eighth place. “Companies like Ford have been in India for decades and still only have miniscule market share. In the past, foreign OEMs thought that a global strategy could simply be repeated in India, which certainly has not been the case,” Master says. “Foreign OEMs have to think more local, and many have started to do this.”

Potential in partnershipsIn Ford’s case, that has prompted a link-up with Mahindra Group to work together on electrification, product development, mobility programmes and connected vehicle projects, announced last year. Ford also said they would work together on “sourcing and commercial efficiencies”. After three years, the two will decide whether to advance the agreement. Mahindra, which owns SsangYong in Korea, is best known for its SUVs in India, but its also the only manufacturer offering electric vehicles there. Governmental agency, the National Institution for Transforming India (aka NITI Aayog) predicted last year that 44% of vehicles in India will be electrified (i.e. pure electric or hybrid) by 2030. Ford’s move might prove to be a canny one.

For now, however, Ford has more success using the country as an export base: in 2017 the company built 262,784 vehicles from two assembly plants, of which more than two thirds were shipped out of the country, including the Ka+ to Europe and the EcoSport to the US.

VW tried again to find a partner with Indian know-how after failing to make its Suzuki tie-up work, but the German firm seems doomed in this aim. Last year, it said an agreement made with Tata to develop low-cost cars with VW’s Skoda brand was to be dismantled. The problem was the cost of adapting Tata’s AMP platform, a source told Reuters. In 2017, the firm did record its highest ever production in a single year at its Pune plant, totalling 150,150 cars, but it remains a minnow. 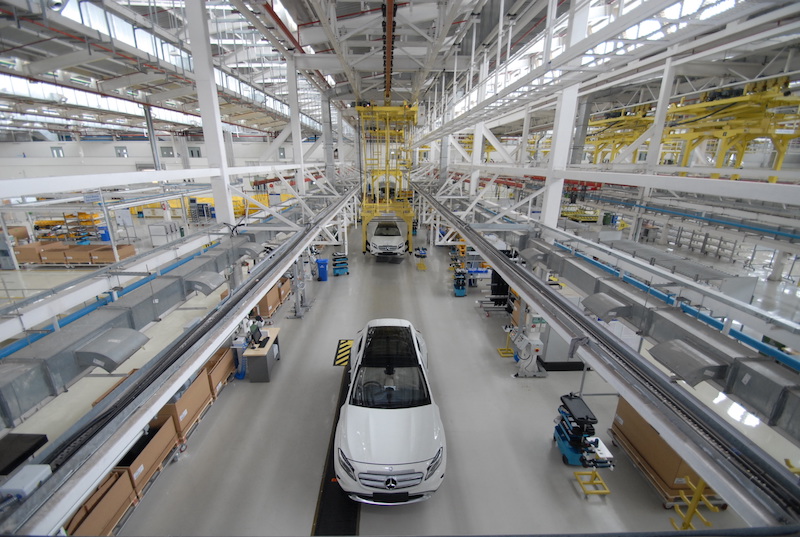 Compact car production at the Mercedes-Benz plant in Pune, India

VW’s time could still come, though, with firms who are struggling to make more expensive global platforms pay in India; possibly becoming some of the few manufacturers to reap the upsides of tough legislation about to hit the automotive industry there. “The major headwinds for the industry at the moment are the upcoming more stringent regulations,” says LMC’s Master. They include mandatory airbags and a seat-belt reminder system for 2019, mandatory front and side crash tests for existing models, also coming in 2019, and the big one: Bharat stage VI emissions regulations (equivalent to Euro 6) in 2020. This could raise the cost of vehicles “significantly”, Master notes, with a predicted 6% hike for the smallest petrol cars and double-digit percentage increases for the smallest diesels.

Mercedes has already rolled out Bharat IV versions of its S-class limo, two years ahead of time, making a big deal of their cleanliness compared to local cars. “We strongly believe that this will pave the way for other manufacturers to introduce their BS VI vehicles in India,” Roland Folger, CEO of Mercedes-Benz India said at the launch last year. 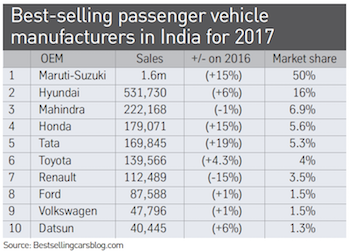 Premium sales performancePremium firms assembling cars from kits in India did well last year. Volvo became the latest upscale car company to establish a plant in the country, and last year began assembling the XC90 large SUV in its new facility in Bangalore. Further models are planned as the company predicts the premium market will grow rapidly from its comparatively low base. Premium best-seller Mercedes recorded its best-ever year for sales in the country, with 15,330, up 16%. Its Pune plant, which opened in 2009, makes the E-class sedan as well as a range of SUVs. Second-placed BMW also had a good year with 9,800 sales, up 25%, with strong demand for its X1 and X5 SUVs, which are assembled from kits at its Chennai plant.

Sales for locally assembled Audis, coming from Skoda’s plant in Aurangabad, crashed in 2016 and stayed flat last year, but the biggest premium growth came from Jaguar Land Rover, which saw sales climb 49% to 3,954. The company, owned by local giant Tata Motors, has assembled cars in the country since 2011 at its Pune plant.

Both premium and mainstream carmakers capitalised on the growth of the SUV, a trend seen in India as elsewhere. AID figures show that sales of SUVs and off-roaders grew 20% in 2017 to take a market share of 29%. That has benefited makers such as Tata, whose Nexon compact SUV helped the firm grow its underperforming car business by 19% for the year. Sales of its diminutive Nano, however, took another tumble, dropping 75% to just 2,585. That the self-styled cheapest car in the world didn’t connect in a market defined by its love of ‘low-cost’ shows just what a troublesome place for automakers India is. 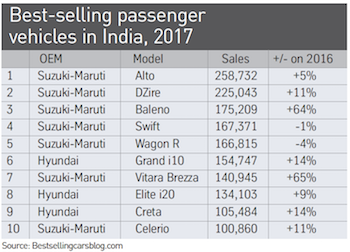 The mechanisation of Indian automakersIndia’s automotive production hovers around 24m units a year, including its phenomenal motorbike output, and employs between 10-13m people directly and indirectly, noted analyst and consultancy firm EY in a study published last year. However, despite increased investment in the industry, automation is going to slow the job-creation rate and dramatically change the roles of the workforce.

Within automotive, automation already plays a big part. EY estimates bodyshops and paintshops are already 95% automated in the country and predicts that will move to 100% by 2020. “Repetitive jobs roles, such as painting and welding, are being threatened,” EY wrote in The Future of Jobs in India, estimating 15-20% of OEM and supplier jobs will be threatened by 2022. Assembly, on the other hand, is only around 20% automated, but EY expects robots to be utilised more in assembly logistics first, cutting costs by 10-20% and inventories by 30-50%.

The march of the robots isn’t inevitable. Of the automotive executives who responded to the EY survey that formed part of the report, half said the key barrier to installing more robots was return on investment, a key point for a low-cost market like India. The EY report concluded: “Abundant and low cost labour will continue to make India a competitive manufacturing hub at least for the next few years.”