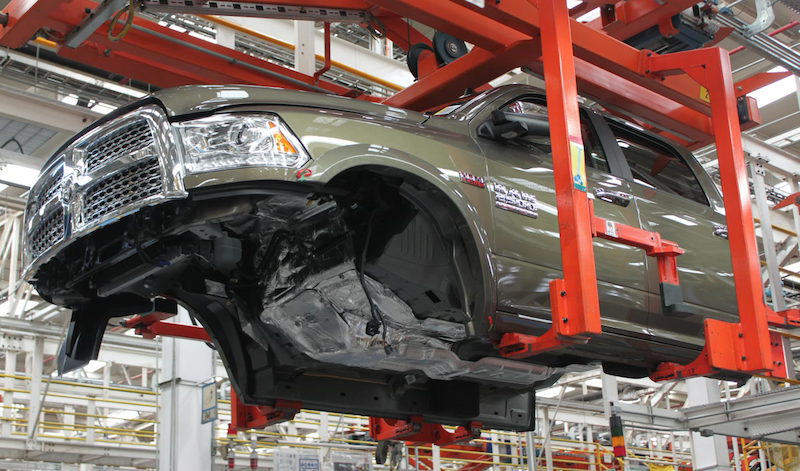 Mexico’s reign as the champion of export-led automotive manufacturing among emerging economies is looking distinctly shaky. Last year, production there fell for the first time since the global financial crisis in 2008, and it’s tempting to point the finger at US President Donald Trump’s crusade to weaken Mexico’s standing as America’s source of cheap cars.

The future is murky for one big reason: the key agreement that persuaded manufacturers to establish plants in Mexico and helped doubled the country’s production since 2000 – the North American Free Trade Agreement (Nafta) – is set to be replaced with a more US-centric arrangement.

As Trump becomes more bellicose over his thwarted attempts to build a wall between the two countries, he has even threatened to shut the border and apply 25% tariffs on cars coming into the US. 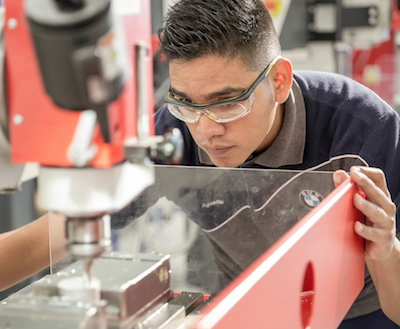 Trump’s antipathy towards Mexico is not the only upheaval facing the country’s automotive industry. Renewed focus on the quality of life for its workers from a newly-elected left-leaning president,

Andrés Manuel López Obrador (aka AMLO), is bringing demands for wages to be increased, pushing up costs or threatening damaging industrial action from a newly empowered workforce.

Mexico has long been seen as the model for emerging markets to establish an export-focused automotive manufacturing industry. Morocco for example styles itself as the ‘the Mexico of Europe’. It’s not just Nafta – Mexico has dozens of free-trade agreements with countries across the globe, making it an exporters’ dream.

But let’s not make too big a deal of its global connections – Mexico predominantly feeds US demand for vehicles. For example, in February, 86% of the 242,299 total exported vehicles went to its Nafta partners US and Canada, according to data from Mexico’s automaker association, AMIA. Just 5.9% headed to Europe, it’s next biggest export market, with 5.8% going to South and Central America.

Very little stays at home – in 2018, 3.4 million of the 3.9 million vehicles produced in the country were exported.

What has riled up President Trump enough to rewrite Nafta is the sheer value of Mexico’s business with the US. The 2.66 million vehicles heading to the US in 2018 (up from 1.89 million in 2014) was worth $52 billion according to the US Government. Mexico overtook Canada in 2016 and now heads up the US automotive import chart by value, ahead of Japan at $40 billion.

In his very narrow view of international trade, Trump believes such a deficit is harmful to the US and has been vocal in trying to repatriate some of that business.

Manufacturers have cut some investment in Mexico, although none have said the reasons are specifically in response to Trump’s threats.

Ford, Mexico’s fifth largest vehicle producer based on 2018 figures was the first to crack. It announced early in 2017 that it was cancelling construction of a $1.6 billion plant in San Luis Potosi, central Mexico, first heralded only a year earlier. The plant was earmarked to build smaller cars and Ford said it was cancelled in response to the rapidly falling market for those cars.

Also in 2017, Toyota announced it was cutting investment in its new Apaseo el Grande plant that it was building in Guanajuato, central Mexico, from $1 billion to $700 million. Instead of building Corollas, it would become a second production site in Mexico for its Tacoma mid-size pickup truck. The news followed a partly erroneous tweet from Trump, who responded to a two-year-old announcement saying: “Toyota Motor said will build a new plant in Baja, Mexico, to build Corolla cars for US. NO WAY! Build plant in US or pay big border tax.”

The Baja site was actually Toyota’s existing plant, but the message apparently hit home. Early last year, Toyota announced the construction of a factory in Alabama in partnership with Mazda to build the Corolla for start in 2021. Toyota was Mexico’s seventh largest producer in Mexico in 2018, although it should leapfrog to fifth when the Apaseo plant comes on stream at the beginning of this year or the end of next year.

FCA Group, Mexico’s third largest producer after GM and Nissan, also gave Trump some good news early 2018 when it announced it was moving production of its Ram Heavy Duty pickups from its Saltillo facility in north east Mexico back over the border to the Warren truck assembly plant in Michigan. The decision was partly made in response to Trump’s generous changes to corporation tax, FCA said.

Mexico not done yet

We’re a long, long way from writing the obituaries on Mexican automotive production, however. Strong sales of its Ram pickups in the US have prompted FCA to row back on promises to remove the heavy duty version from Saltillo, US media reported last year, although the official line is that it is still moving.

And last year’s officially production drop of 0.6% on 2017’s figure wasn’t quite right. Daimler didn’t report production numbers from its new Aguascalientes, central Mexico, plant, which has been making the new Mercedes A-class since September 2018. Add the 23,980 vehicles IHS Markit estimates Daimler made in the plant adjacent to Nissan’s huge facility there and Mexico’s production numbers were almost flat.

The figures were also skewed by the fact that Honda was unable to produce cars at its Celaya plant, in Guanajuato, central Mexico, between June and November due to the after effect of a flood there, costing the company around 75,000 cars. The plant, opened in 2014, builds the Fit small car and HR-V small SUV. It also has an engine and gearbox plant there.

Capacity is still going in. BMW has just started production at its new San Luis Potosi plant in central Mexico building the 3-series midsize sedan for mainly the US market. The plant has a capacity of 175,000 a year and becomes the third site for the 3-series globally alongside Munich, Germany and Shenyang, China. Meanwhile Spanish metal parts maker Gestamp opened its second plant in San Luis Potosi in March after investing $86 million. The plant will make hot-formed steel parts as well as hydroformed parts, which are formed using water. Gestamp said it was the first time a plant of its located in the Americas has been fitted with the technology. BMW is a likely customer, although Gestamp didn’t say it. Gestamp Mexico now has seven production plants, located Puebla, Toluca, Aguascalientes and San Luis Potosí.

Gestamp was confident Mexico would continue to grow, despite its setbacks. The metal component specialist’s then chairman Francisco Riberas described the country as “a market with strong potential, which has grown exponentially in recent years” in a statement at the plant’s opening.

Meanwhile Ford has said it will build electric cars in Mexico, specifically it’s new “Mustang-inspired” Mach E, at its plant in Cuautitlan, just north of Mexico City. It’s a big win for the country and reflective of the need to offset the expense of electric cars by building them in a low-cost country. Earlier this year Ford also said it would shift production of the Transit Connect van for US sales from Spain to Mexico, thus avoiding the need for trickery to get around the infamous ‘chicken tax’ on commercial vehicles from Europe to the US (Ford sent them over as passenger vans, then filled in the windows).

The addition of more premium carmakers such as Audi (which opened a plant in San José Chiapa in 2016 in making the Q5 SUV) is bumping up the value of the cars Mexico produces. According to figures from the World Trade Organsiation, Mexico rose to fourth on the list of top 10 auto exporters by value in 2018, behind Germany, Japan and the US, but moving ahead of the UK. The increase in value could be partly explained by the shift by GM, Mexico’s largest auto exporter, away from sedans and compact cars to focus on SUVs.

This is now threatened by the Nafta replacement, USMCA (United States-Mexico-Canada Agreement). Nafta came into force in 1994 to establish a free trade region between Mexico, Canada and the US by cutting tariffs and customs barriers with the purpose of making companies in those regions globally competitive. The protectionist Mexico of old was dismantled and Mexican light vehicle production rose from 1.1 million in 1994 at the start of NAFTA to 2.9 million in 2014 and 3.9 million last year. For the vehicle makers it was the perfect place to build lower-tech commercials such as pickups (eg Ram at Saltillo, Chevy Silverado at Silao) or lower-margin small cars (eg Chevy Trax at San Luis Potosi, VW Jetta at Puebla).

But, of course, that meant exports to the US increased as more OEMs took advantage of Mexico’s lower costs, and soon after he was elected in 2016 President Trump ordered the redrawing of Nafta. The USMCA agreement was signed in November 2018, but at the time of writing still hasn’t been ratified by the US Congress, meaning the status quo prevails. 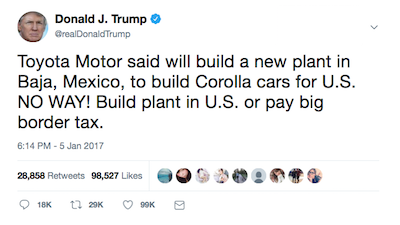 In his own style and an often narrow view of international trade, President Trump has been outspoken on the matter

According to the US Trade Office, USMCA “creates a more level playing field for American workers” and “closes gaps in the current Nafta agreement that incentivised low wages in automobile and parts production”, ie, in Mexico.

It does this by requiring that 40-45% of automotive content be made by workers earning at least $16 per hour, far more than the average wage in Mexico.

The toughest one for automakers is the requirement that 75% of parts used for vehicles made in the three countries are sourced from those countries, up from the 62.5%, or else tariffs apply. It also requires that 70% of steel and aluminium is purchased within the USCMA zone.

OEMs such as Ford and GM, with strong local supply chains, are unlikely to be unaffected, particularly when building US specific cars like large pickups or SUVs. The tougher challenge is faced by foreign manufacturers with a global supply footprint. An Automotive News report last November highlighted Honda’s production of the Fit and HR-V in Celaya. It said that Fit and HR-V content from North America and Mexico stood at around 55%, with the bulk sourced in low-cost Mexico (which would fall foul of the higher-wage requirement). Media reports have said Honda might build the Fit (named Jazz in Europe markets) in Japan instead.

The rules of origin requirement could have a ‘significant impact’ on automakers in Mexico, Eduardo Solis, executive president AMIA told the Automotive Logistics Mexico conference held in February. “It would be hard to meet,” he said. He added that more information was need on calculating component percentages.

Meanwhile the requirement for higher wages could see Mexico lose its appeal for automotive firms looking to expand, Roberto Zavala, senior vice-president of operations in Mexico for automotive logistics firm Wallenius Wilhelmsen Solutions argued. “If you take that away all new investments would be challenged in the ROIs [return on investments]”, he told the same conference.

Raising wages is also a key plank of populist Mexican president, Amlo. He has already raised wages in the US border towns, home to the Maquiladoras, or foreign-owned companies first established pre-Nafta as way to bring foreign investment into the country. Almost two million work in these factories, many of which are parts suppliers, and they have been affected by on-going strikes, particularly in the town of Matamoros, located right at the border with Texas, where suppliers include seat specialists Adient.

Previous Mexican governments have suppressed unions which has kept wages low. With Amlo promising to guarantee free and independent unions, Mexico’s biggest pull of cheap labour could be threatened and with it possibly the steady influx of automotive investment. Mexico sits at a dangerous point in its automotive future – if USCMA doesn’t pass Congress and Trump chooses abandons Nafta altogether in pique, then Mexico will lurch straight into a crisis. If USMCA does pass and wages increase, Mexico will enter a new, more mature phase where it chases higher tech investments. Either way, the days of double-digit percentage growth are probably over.