After more than half a century of carmaking, major changes are underway at Bentley’s Crewe headquarters as the luxury brand enacts a leaner and streamlined phase

Bentley returned to its money-losing ways last year after a run of seven profitable years. The main reason for the €55m ($61m) loss was the delay in replacing its core Continental GT coupe and convertible models, as well as the related Flying Spur limousine. Once it had ironed out the problems partly created by the ambitious superformed aluminium bodywork, it then got stuck in the interminable VW Group queue to get the cars tested for the new WLTP emissions cycle. All three models are now flowing, but while issues with the cars were being sorted, Bentley also looked for savings at its factory in Crewe, north-west England, where the brand has been producing cars since 1946. 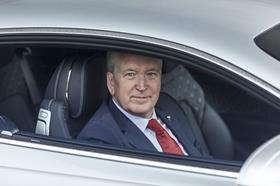 With the help of Porsche Consulting, Bentley identified opportunities to speed up production while also reducing staffing levels. It managed to reduce the time spent at each assembly station (the takt time) from over 12 minutes to nine minutes on the key Continental line.

“I would say the improvement is as big or probably bigger than any factory has done in the 12-month period,” says Bentley CEO Adrian Hallmark during AMS’ visit to the plant. “It’s certainly more than Porsche achieved back in the 1990s when [former Porsche CEO] Wendelin Weideking did the first phase of ‘lean’.”

This is illustrated perfectly on our tour of the assembly line for the Continental GT, GTC convertible and Flying Spur when we pass the sub-assembly area for the dashboard.

Our guide is John O’Driscoll, a former leather trimmer, who now acts as one of two customer hosts to guide prospective buyers around the plant. He points out the 10 stations on the dash sub-assembly area, only to be gently corrected by a worker, who says they are now down to seven stations. Bentley filmed each station and, with the help of the workers, managed to reduce both station numbers and staff. Staff were relocated to another part of the factory, or as part of the cost-saving push, offered voluntary retirement if they were over 55 years old. Over the last year, Bentley has reduced its headcount by 450, around 10% of the total, of which 380 were Bentley staff (the rest were agency workers). 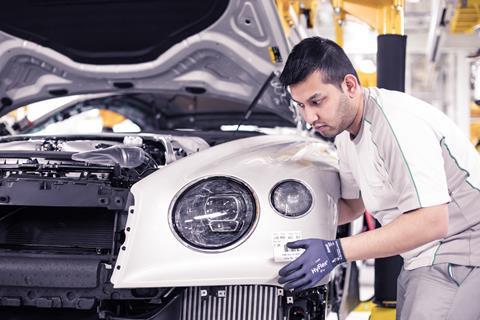 The Bentley factory in Crewe, north-west England, has been producing luxury cars since 1946

Bentley operates two assembly lines for core models – the 64-station Continental line and the 47-station line for its SUV, the Bentayga. A separate production hall assembles the flagship Mulsanne limousine, which still harks back to a slower era. There the takt time is 211 minutes and it’s the only model where the body is still made on site. The bodies for the two Continental cars and the Flying Spur meanwhile are made by Porsche in Leipzig, Germany, while those of the Bentayga come from VW’s plant in Bratislava in Slovakia.

The plant has been much rejigged since it was constructed to build Merlin aircraft engines in the Second World War, but at its core are the same brick buildings with the saw-toothed roof to catch the maximum amount of northern light (it also made the building look like a housing estate to Luftwaffe bombers).

The U-shaped Continental line fits into one of the brick buildings, while the L-shaped Bentayga line sits at the end of the same building but also spills into another, necessitating the shipment of bodies across on dollies. Bentley is currently moving some of the more forward-looking facilities, such as the pilot build hall and prototype workshops, over to the other side of the famous Pym’s Lane of the company’s address. That takes the size acreage from 80 to 115 and means the road will be closed off public traffic and enclosed within the site.

With the additional room in and around the brick buildings, Bentley can start to equip halls better suited to build its first electric car, potentially a crossover slightly smaller than the Bentayga, which is due by 2025. This will require specific areas to both store the batteries and marry them to the car, if not a whole separate production line. 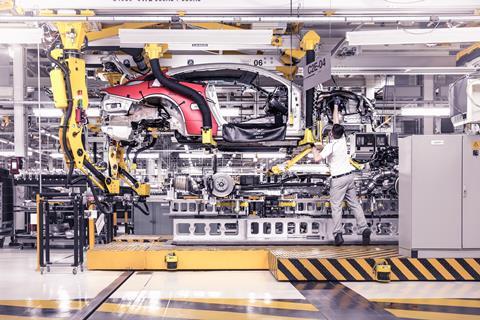 Bentley operates two assembly lines for core models – the 64-station Continental line (above) and the 47-station line for its SUV, the Bentayga

The two assembly lines run a single shift from 7am to 3pm five days a week. Bentley is obviously reluctant to hire more staff to give them the second shift that would speed up production to fulfil the backlog of orders for the new Continental GT and Flying Spur, but staff are currently working ‘up-weeks’ that add another one hour 15 minutes to the day. It is hoped this, together with the faster takt times, will give Bentley the right balance of speed and frugality.

Other areas work more shifts – dynamic testing and engine assembly work two, with the plant building the W12 engine and dressing the V8. Some areas of the trimshop worth three shifts because of the sheer time it takes. Also on three shifts are the paintshop and woodshop, where the veneers are polished and applied.

Sometimes the sheer size of and complexity of the cars being built reveals itself on the line. A special ‘co-bot’ on the Continental line helps workers lift the unit that combines the tank for the air suspension and the battery into the Flying Spur. And each line has a series of ovens in which the wiring harnesses, supplied by Leoni, are gently heated to a temperature of 45° before being fitted to the car. This makes them more flexible – essential when you’re trying to manoeuvre 48kg of wiring into place in just 9.1 minutes flat. 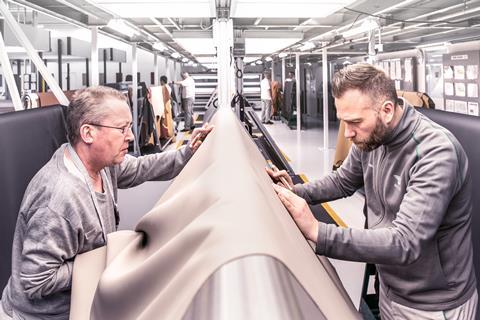 Bentley is a centre of excellence within the VW Group for both leather and paint, and it’s easy to see why. No car goes out without leather and the scale of the operation needed to trim them is vast. Almost all trim is done in-house, even applying the foam backing. The 6,800 sq.m building used to be the bodyshop for the old Arnage limousine and houses 350 staff. The leather hides come from Italian supplier Pasubio and are carefully scrutinised for flaws.

This process has been overhauled in Bentley’s recent cost-cutting drive (see Q&A) and, as a result, the Zund cutting machine is more efficient at carving out pieces for specific parts of the car. In total, a car might use between 10-17 hides, so moving from 55% utilisation of a hide to close on 80% saves a lot of money. The excess is then sold to make leather goods like watch straps.

A large percentage of the staff, mainly women, sit at the 110-odd sewing machines stitching leather parts, such as coverings for steering wheels, which require 620 stitches and take four hours. Automatic embroidery machines handle the Bentley logo in the seat backs, or whatever the customer requests. The most amusing, O’Driscoll recounts, was the lady who ordered her name on the drivers’ seat and just the word ‘boyfriend’ on the passenger seat. 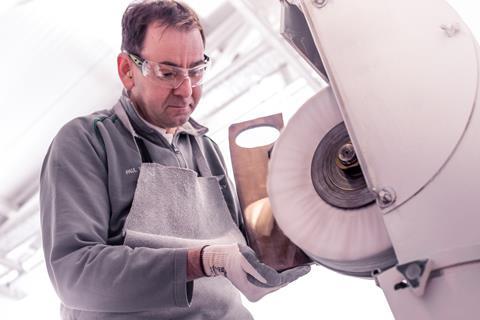 The woodshop occupies a big space, measuring 5400 sq.m with a team of 150 to sand, lacquer and polish veneers

The woodshop is a highlight. It’s a big space, measuring 5400 sq.m, and employs 150 people to sand, lacquer and polish veneers. Walnut is the favourite, and is traditionally used because the ‘burr’ or ‘burl’ growths on the tree root create such amazing knot patterns. The burl is cut from mainly Californian trees and then boiled and skinned to create the veneers. Oddly perhaps, its number-one spot among the 11 veneers Bentley offers is largely because it forms the basis of the piano black veneer, where black lacquer is sprayed over the wood, obscuring the knot patterns completely.

Change is coming to Bentley, though. The company is investigating materials that might eventually replace leather, should customers starting rejecting animal by-products. The company says it is now carbon-neutral after installing additional solar panels to its factory roofs early this year, meaning it now generates 65% of its own electricity. The remaining electricity is apparently bought from companies offering renewable energy. The carmaker has already launched its first plug-in hybrid in the Bentayga and is planning to convert the Continental and Flying Spur as well. Then comes the electric car. But it is also in a good financial position after “an abomination of a couple of years”, according to Hallmark.

“Next year, it would be hard not to have a record year,” he asserts.