As the first VW plant outside Germany, Anchieta paved the way for the OEM’s leading position within Brazil 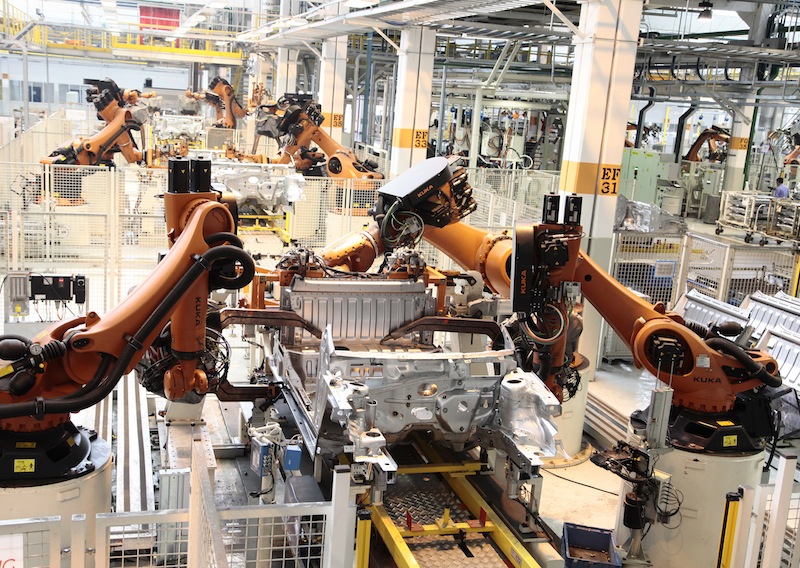 When Volkswagen first looked to produce vehicles outside its home nation after the devastation of World War Two, the incipient automotive hub around São Paulo was the location it chose. A bilateral trade agreement between Germany and Brazil in 1950 opened up the possibility of exports and enabled local CKD assembly of the Transporter and Beetle; in 1953, the OEM established its own small assembly facility at Ipiranga. Shortly after, VW took the step of setting up its first manufacturing operation in the country: Anchieta Plant was launched in 1959.

“It’s where the whole history starts,” says plant director Frank Sowade. “In reality, the whole automotive industry in Brazil was born in this São Bernardo do Campo region, so the centre of our business and brand here in Brazil is Anchieta Plant.” Like other OEMs in the area, VW wanted to be close to São Paulo’s Port of Santos in order to bring in parts from Europe and the US. Today, the Brazilian Government strongly encourages local component manufacturing via its Inovar-Auto programme; but as Sowade points out, there are other advantages to the location, such as the steady supply of qualified technical personnel from the local universities.

Covering 966,156 sq.m on 1.6m sq.m of land, Anchieta is not only VW’s oldest plant in South America but its largest – in fact the biggest manufacturing facility of any vehicle-maker in Brazil at present. In the global VW production network, Anchieta ranks second only to Wolfsburg, Germany, in terms of size, and its 12,369 personnel can produce 1,600 cars on the current three shifts per day. A complete production unit, Anchieta incorporates stamping, body, paint and assembly facilities as well as the headquarters and Development department of VW Brazil. There is also a tool and die shop, housing 519 workers.

Since the start of operations, VW Brazil has made more than 20m vehicles, 3m of which have been exported, and this output has been driven by production at Anchieta; by 1970, the plant had made its 1 millionth vehicle, and by 2013 its 12 millionth. The plant makes Brazil’s long-term bestseller, the Gol, plus the Polo, Polo Sedan and Saveiro, and helped VW to an 18.6% market share for cars and light commercial vehicles (LCVs) in 2013, just behind Fiat. VW Brazil’s record production of 852,100 units in 2012 was followed by a dip during the global financial crisis, but last year the OEM made a healthy 761,000 vehicles in the country. Brazil is now the vehicle-maker’s third-largest market after China and Germany, although 148,000 units of last year’s output were exported.

Anchieta has been joined by two other VW car plants in the country. Established in 1976, the 357,395 sq.m Taubaté facility in São Paulo produces the Gol, up! and Voyage, while the 303,874 sq.m São José dos Pinhais plant in Paraná – opened in 1999 – makes the Fox, CrossFox and SpaceFox. The latter will also make the Golf and the Audi A3 Sedan from the middle of next year, and the Audi Q3 SUV from the first quarter of 2016.

Meanwhile, the 87,388 sq.m plant at São Carlos, São Paulo, manufactures petrol, diesel and ethanol engines. VW opened São Carlos in 1996, as well as expanding both Anchieta and Taubaté, in order to boost capacity after the end of a decade-long joint venture with Ford called Autolatina, which was established during a time of economic crisis in Brazil. Last year, VW Brazil made a total of 805,000 engines and 129,000 gearboxes.

Today, the three car plants and one engine plant are fed with components by over 3,000 suppliers concentrated in the São Paulo area, together accounting for a daily production capacity of 3,500 vehicles and 3,800 engines. VW’s total workforce in Brazil currently stands at 22,000 individuals.

Strengthening Saveiro production
The 11 lines of the 78,000 sq.m press shop at Anchieta, staffed by 629 personnel, consume around 45,000 tons of steel per month in the production of 1.1m stamped parts. In 2012, the shop was upgraded with the addition of a Small Transfer press which operates at 2,000 tons of pressure and speeds of up to 25 strokes per minute. The facility feeds two bodyshop lines operated by 2,037 personnel: one for the Polo and Gol, the other for the Saveiro.

Saveiro production is housed within a new building that opened in 2012 at a cost of 250m reais ($106m) after a one-year construction period. As Sowade explains, the investment was made because VW needed to produce more of the Saveiro without compromising production of the Gol, the market leader for the past 27 years with 7.5m units built so far (more than 1m for export). The Saveiro is the kind of LCV which is very popular in Brazil; by November last year VW had already produced more than 1m of this model. A Saveiro Double Cabin version was launched this August after an additional 50m reais investment. 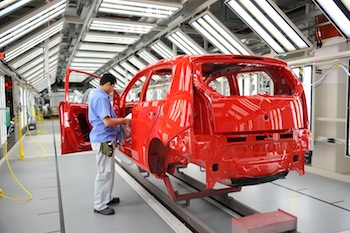 Sowade says the new 35,000 sq.m bodyshop is “state-of-the-art” and that it “compares to any European plant”. There are four main areas: Underbody 1 and Underbody 2; side panels and roof; body-in-white (BIW); and the finishing area where the doors and tailgate are added. Since there is not enough space for a conventional fishbone layout, the doors, bonnet and tailgate are produced in the basement before being raised to the floor of the bodyshop.

There are 137 personnel per shift operating in combination with 182 robots from Kuka, giving an automation level of 57% for welding processes. There are 4,000 weld points on the Saveiro, amounting to five metres of seams, and the roofs are spot welded rather than laser welded. The takt time in the bodyshop is 142 seconds and the facility is currently operating at 450jpd. After the bodies are finished with the addition of the doors, bonnet and tailgate, and checked for surface defects, they head to the paintshop by overhead conveyor.

The 152,000 sq.m paintshop is manned by 1,247 personnel and now houses a single line, after a manual line was deactivated last year with the end of Transporter production. Nonetheless, the capacity of the paintshop has been increased over the past four years through the introduction of new robots, all from Dürr. In 2014 alone, there were four additions to the sealing line, three for the primer and two for the black rocker panel.

The 128,000 sq.m assembly hall operates on two levels and accommodates two lines plus 2,862 personnel; pre-assembly, including that of powertrain, takes place in the basement. There are six branches in the hall, each governed by a supervisor leading a team of 40-60 workers. At the time AMS visited, vehicles were being assembled at a rate of 980 per day, around half of these being Saveiros. In fact, the hall is an assembly point not only for vehicles but for people; every two hours, shift leaders from all parts of the plant including bodyshop and logistics, come together to exchange information and check the status of the overall operation.

“One important thing for me that’s linked to everything is the point of quality,” confirms Sowade. He extends this to the market in which his plant operates: “I think Brazil as a whole, not only the automotive industry, has a lot of homework to do in terms of productivity if we want to be competitive and keep on running.” The country would do well to follow the example of the continually adaptive Anchieta – VW’s production pioneer in Brazil.

Last year, the Dow Jones Sustainability Index recognised Volkswagen Group as the greenest vehicle-maker in the industry, after analysing the operations of 31 companies. This success can in part be attributed to the Think Blue concept which was developed in 2010 and evolved into the production-orientated Think Blue Factory in 2011; the aim is to achieve a reduction of 25% by 2018 across five key indicators – energy, water, waste, CO2 and solvents.

In March this year, Michael Macht, then member of the board of management of Volkswagen Aktiengesellschaft responsible for Group Production, commented: “Brazil is and will remain a cornerstone of our Group strategy”. He said the company would invest €3.6 billion ($4.8 billion) in new products and technologies in the country up to 2018. “One of the main emphases will be on environmentally compatible production at our Brazilian locations,” he stated.

All VW plants in Brazil have already been certified with ISO 14001 for environmental management, but the OEM continues to see improvements through the application of its Think Blue principles, according to Almir Marques, factory planning, infrastructure and environmental manager at Anchieta Plant.

For example, at Anchieta, an investment in new Kuka robots and medium-frequency welding guns has resulted in an energy reduction of 30%. Meanwhile, São Carlos has installed translucent tiles to enable natural lighting in its new building for the EA211-family 1.0-litre and 1.6-litre engines, and now operates a minimum lubricant quantity (MLQ) system in the machining lines. At São José dos Pinhais, a weather station has been established to rationalise the use of energy and natural gas through the collection of climatic data.

One of VW Brazil’s most important projects from a sustainability perspective is the new and fully automated paintshop at Taubaté, which uses water-based, primerless processes to cut CO2 output by 11,080 tons per year as well as reducing energy use by 30% and water by 20% per vehicle manufactured. Dry electrostatic cleaning technology also enables the reuse of 80% of the exhaust air, contributing to the energy reduction. An application is underway for the 427.8m reais ($190m) paintshop to gain United Nations carbon credits. 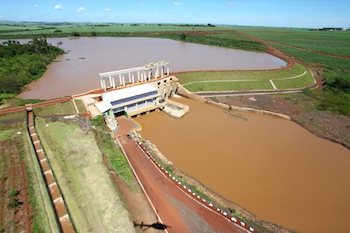 The vehicle-maker’s first such credit was for the construction of a 140 reais ($59m) hydro-electric power plant in São Paulo State, which contains three out of the four VW plants in the country (São José dos Pinhais being located in Paraná State). Having become operational in 2010, Anhanguera power plant now generates 120m KWh per annum and supplies 18% of the electricity required by the OEM in Brazil.

Both the water and solar resources of Brazil clearly offer immense potential for sustainability measures, but according to Marques the current ROI tips the balance in favour of hydropower, and so this is the “direction” VW is taking. Indeed, a second hydropower plant project is planned for the near future, with a view to raising in-house green energy supply to 40% (and 90% as a whole).