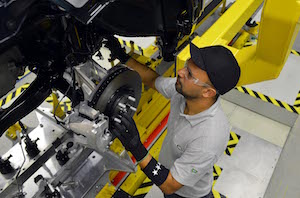 With the referendum on EU membership fast approaching, the UK’s automotive industry gathered at the National Exhibition Centre in Birmingham for the first AutoMechanika show outside Germany. At the accompanying open forum for its members, the Society of Motor Manufacturers and Traders was in buoyant mood, announcing that its supply chain members expect to invest £225m over the next three years.

This investment will support the rising local content of UK-built vehicles, which according to government estimates is now over 40%. Impressive though this figure is, it obscures wide variation. JLR told the gathering that it is now achieving over 50% UK content on new vehicles, and the implication is clear: that other manufacturers have much lower UK content levels.

There is no doubt that the UK has done well recently to attract new investment from several major tier ones, such as Lear, Plastic Omnium, Tenneco, TRW, BorgWarner and others. These companies have invested in the UK in response to rising production at Nissan and Jaguar Land Rover (JLR) especially, but GM’s new van at Luton and new Astra at Ellesmere Port have also led to new UK investments by Gestamp, IAC, Magna, NIFCO and Tenneco.

However, the elephant in the room (perhaps speakers were asked to ignore it) was the upcoming EU referendum. Judging by the paucity of announcements on the subject, decision-making regarding new investment in the UK automotive industry has stalled. What will happen on June 23 remains in the balance, but there seems little doubt that if the UK votes to leave the EU then attracting further investment in the near term will be a tough task. The situation will undoubtedly settle down, but the UK automotive industry really needs a vote in favour of remaining in the EU for the next round of investment in the country to be activated.

While the UK economy and automotive industry are in temporary stasis, elsewhere the global automotive industry continues to expand and invest. Volkswagen (VW) has set out its new strategy to turn its fortunes around following the diesel emissions crisis. The new-look VW will feature a comprehensive electric vehicle (EV) range and, intriguingly, a restructured and refocused component production group; a latter day Visteon or Delphi may be about to emerge.

Daimler has also indicated that it will accelerate the expansion of its EV line-up, while BMW has started building its new factory in Mexico. The San Luis Potosí plant will make the 3-series sedan for export to the US (and elsewhere), replacing production currently taking place in South Africa. The Rosslyn plant will instead take on some of the production of the X3 SUV, a vehicle seen as more suited to African and other nearby markets.

In addition, JLR has officially opened its first plant in Latin America, at Itaiaia in Brazil. This small plant, capable of making 24,000 vehicles a year initially, will be reliant on the UK for painted bodies and engines, but nonetheless illustrates the globalisation of this once niche UK manufacturer. With existing, new or imminent factories in China, Slovakia, India and now Brazil, JLR knows that it cannot rely on producing all its output in the UK, especially if the vote on June 23 goes the ‘wrong’ way.