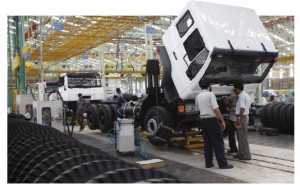 Commercial vehicles (CVs) have recently gone through a difficult period in the Indian market. Although the country’s economic growth has seen production of all CVs almost double from just over half a million in the financial year ending March 2008, to just under 920,000 three years later, in 2012 they were down by 100,000 as the country’s wider financial problems took hold. This year they have tumbled even further.

Sales of heavy CVs have been hit hardest, collapsing by just over a quarter in the six months to the end of October this year and contributing to a slump of 16% in the overall sector, according to figures from the Society of Indian Automotive Manufacturers (SIAM). This has led to extended shutdowns in factories. However, both the big manufacturers themselves and industry observers are confident the market will expand again.

IHS Automotive analysts believe the medium and heavy CV market will soar to 600,000 in 2020, up from a projected 250,000 this year. IHS’s head of Asia for this sector, Amit Kaushik, says this is inevitable due to the industrialisation, urbanisation and infrastructure development that will occur as India gets back on the path to growth. He also points out that almost no trucks sold in India are imported.

Including light CVs, the Auto Component Manufacturers Association of India believes the production figure will reach 2.3 million by 2020, up from 832,000 last year.

The production forecast is enough to tempt any CV-maker, and foreign OEMs have been increasingly successful in taking on the two domestic manufacturers which dominate the market in India. Market leader Tata sold 530,000 CVs in the last financial year to take 59% of the sector, while Ashok-Leyland, of the vast Hinduja conglomerate, chalked up sales of 105,833.

Athough Tata’s car ventures receive more publicity, the company is much stronger in the CV sector, according to Bernstein analyst Max Warburton. “This is a much bigger business than passenger cars for Tata and has historically been quite profitable. This is probably where the future of Tata’s business is in India,” he wrote in a report published in September.

Problems amidst potential
Right now there are difficulies. Tata has stopped production for up to a week at its Jamshedpur plant in Jharkhand, eastern India, no fewer than three times this year. Even when the facility is running, production is around 200-250 a day compared to the usual 400, plant manager AB Lall admitted in November, noting that the current slump was worse than that of 2008.

Warburton says the fall in heavy CVs is partly down to the government’s clampdown on mining due to environmental concerns and it is a problem that is spreading through the supply chain. Parts supplier Bosch India has also had to cut production in two plants, the company’s head Steffen Berns told TV station CNBC-TV18.

Nor is it just poor sales that should worry the two big hitters, according to IHS. India’s cost-effectiveness in production and the expected local sales growth is attracting foreign manufactures. “There will be significant risks for the incumbent players going forward,” says Kaushik.

CV-makers moving into India
One of the most successful foreign OEMs in India is Daimler, which entered the market under its BharatBenz brand (‘Bharat’ meaning ‘India’). Building out of a new factory in Oragadam, near the eastern automotive hub of Chennai, the company produces heavy-duty trucks based on Mercedes’ Axor platform and lighter CVs using platforms from Daimler’s Japanese Fuso brand.

Between the start of production in April last year and this September, 5,000 BharatBenz vehicles had been manufactured. According to figures sourced by the Economic Times for sales in the first six months of this year to June, BharatBenz had become the fifth largest truck manufacturer, overtaking Indian company AMW Trucks and also MAN Trucks.

MAN has a long history in the country, but last year cut ties with its Indian joint venture (JV) partner to pursue a trend followed by many automotive OEMs now that the market has been liberalised: going it alone. The company’s plant at Prithampur in Madhya Pradesh builds heavy CLA trucks for India, plus exports for Asia, Africa and the former Soviet Union countries. The capacity stands at 24,000 a year.

Exports & expansion abroad
Exports form a big part of CV-makers’ plans in India. VE Commercial Vehicles, the 50:50 partnership between Volvo Group and Eicher Motors, has a powertrain plant in Prithampur which builds engines both for local use in Eicher-branded vehicles and also for medium-duty Volvo trucks built in France. The plant started production earlier this year and has a maximum capacity per year of 100,000. In its annual report, Eicher described the plant as a “world-class engine manufacturing facility with modern design and frugal engineering approach”.

Indian CV-makers are expanding overseas as well. Ashok-Leyland has a bus plant in the United Arab Emirates (UAE) as well as owning the Czech Republic’s Avia, which made 1,003 trucks in the 2012/13 financial year. However, Ashok Leyland’s company report for the year ending March 2013 admitted that European economic woes were putting Avia under “severe strain”.

Stricter safety & emissions rules
According to IHS, the biggest threat to the sales of both Ashok and Tata comes from technological advances imposed by an Indian government wanting tighter safety and emissions regulations.

“We expect that ensuing technological up-gradation and modifications will result in price escalations and put pressure on the margins of the domestic CV players,” states Kaushik. Earlier this year, the Ministry of Road Transport and Highways said it would make anti-lock braking systems mandatory for all new CVs from 2014. Meanwhile, emissions regulations are moving to Euro 4. This will raise prices and favour foreign manufacturers either already offering the systems or with platforms that can easily accommodate the changes.

Eicher’s partnership with Volvo has ensured that its joint engine plant makes both Euro 6 versions of the powerplants for export and Euro 3 and 4 iterations for domestic consumption.

Ashok-Leyland admitted in its report that legislation will result in “higher investment and production cost”. The company has no direct partnership with a foreign OEM, but via its Hinduja Group parent it does own the German exhaust after-treatment specialist Albonair, an investment it said was made to “address the dual objectives of acquiring competence and cost-efficiency in the critical area of future emission technologies”.

Vehicle downsizing in production
Another move Ashok-Leyland has made to offset the drop in heavy CV sales is a shift in focus to vans; a market it describes as “relatively less volatile”. To that end, the company has partnered with Nissan at Ashok-Leyland’s base in Ennore, Chennai, to build the Dost LCV, based on Nissan’s NV200. The company sold 35,000 units in its first full year of production and has branched out into a passenger model powered by a version of the 1.5-litre Renault Nissan diesel that drives many of the Alliance’s cars in India.

Likewise, Tata’s CV sales are bolstered to a significant extent by its van and microvan offerings, with the latter badged as the Ace Zip (a truck) and Magic Iris (a people carrier) and built at the firm’s Dharwad plant, which became operational last year. These 611cc vehicles were launched as a safer, more comfortable alternative to the three-wheeler rickshaw and have increased Tata’s CV presence. Tata sold 323,118 LCVs until the end of March this year, a rise of 23% from the year before.

Local content remains high
As with cars and motorbikes, India’s trucks are made with a very high proportion of local content. A MAN spokesperson previously said that the CLA range is 90% Indian in origin.

One of the few manufacturers building from kits is Scania, which has just started production at a new plant in Narasapura, near Bangalore, which has a capacity for approximately 2,500 trucks and 1,000 inter-city coaches. Describing it as the company’s largest industrial footprint in Asia so far, Scania CEO Martin Lundstedt said at the inauguration of the plant in September that it would supply both India and other (unspecified) regions.

Some areas of India’s CV production are doing very well. The vast tractor output saw no reduction last year, with the total of 641,000 far outstripping heavy CVs. Volume is predicted to rise to one million by 2020, according to ACMA. While the heavy CV sector is currently enduring difficult times, Indian manufacturers and analysts believe it will fall into line with other automotive sectors that will see growth in the long term.