The plan for Japan

In the face of a strengthening yen and falling home sales, Japan is battling to keep its internationally admired vehicle production network relevant and cost-effective 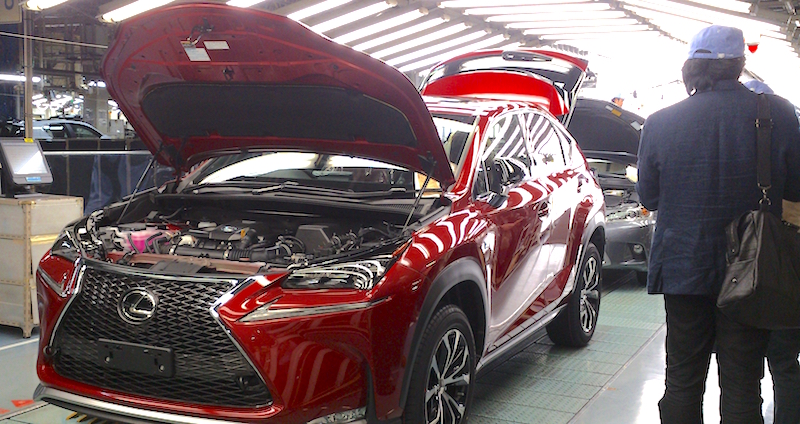 The country last year made 9.28m vehicles, putting it in third place globally behind China and the US. However, the overall number was down 5% on the year before, according to figures from the Japan Automobile Manufacturers’ Association (JAMA), as vehicle demand fell locally.Of that figure, the bulk (7.83m) were cars. That was a long way off the country’s peak car production of 9.95m in 1990 and its second peak in 2007 of 9.94m. Analyst firm IHS Automotive believes Japan can push its car production back up to 9m by 2020 but “with the condition that the Japanese yen stays at 120 to the US dollar”, according to Masatoshi Nishimoto, manager for Japan/Korea vehicle forecasts for the firm.

That’s because Japan remains a phenomenal vehicle exporter at 4.58m vehicles in 2015. Therefore it is hugely sensitive to the fluctuations in currency. At the time of print, the yen had strengthened to 102 to the dollar. It was last at 120 back in February this year and has been generally getting stronger since, with a sharp hike at the end of June in response to the UK’s vote to exit from the European Union.

Back in July JAMA pressed the government in Tokyo to act. In a statement, JAMA said it was “especially concerned about recent speculative movements in the foreign exchange market” which were having a “destabilising” impact on business. “We believe that swift and appropriate measures by the Japanese government in response to this situation are therefore necessary,” it said.

The strengthening yen will affect Japanese makers’ export strategy, IHS’s Masatoshi said. His prediction is that plans made by Nissan and Honda to transfer some production from its over-worked North American plants back to Japan will likely not go ahead if the yen remains strong, therefore missing their home production target of around 1m apiece.

With the US market reaching saturation levels, Japanese makers had been hoping to fill any shortfalls in demand by importing from Japan, rather than invest in adding more capacity to US plants running on average at about 90% utilisation. That would have also helped falling utilisation in Japanese plants, which IHS estimates at a (still healthy) 80% on average. However if Japanese makers decide not to repatriate some production due to the strengthening yen, IHS predicts that utilisation rate will have fallen below 80% by 2020.

Kei cars are the most popular vehicle in Japan but last year sales slid 18% to 1.5m

Local market shrinksJapan needs the predictability of exports. Last year its local vehicle market fell last year for the first time in four years at 5.05m, down 9.3%. A big part of the fall was down to a collapse in sales of the kei-car, a vehicle peculiar to Japan and one almost entirely supplied by local factories. Sales of these tiny sub-660cc cars are supported by lighter taxes and are subsequently the most popular type of car in Japan. However last year sales slid 18% to 1.5m.There were two reasons for this according to IHS: one, kei-car tax rises in April last year and two, the scandal in which big players Mitsubishi and Suzuki were accused of cheating in fuel-economy tests for kei-cars.

Such was the impact that in May Nissan took advantage of Mitsubishi’s subsequent financial instability to buy a controlling 34% in the firm. Nissan’s reputation for cost-cutting is now putting the fear into locals living in the southern town of Mizushima where Mitsubishi, Japan’s sixth-largest vehicle maker, has its flagship plant. Reporting on the possible likelihood of Nissan shutting the plant, Automotive News pointed out that when CEO Carlos Ghosn arrived in Nissan in 1999, his plan called for the closing of five Japanese factories. There’s unlikely to be any money for new plants or expansion for existing ones across the industry. “We do not expect any significant investment to increase production capacity toward 2025,” IHS’s Masatoshi said.

After the scandal, the kei-car is unlikely to dominate in the same way again. “We do not expect the minicar will regain a 40% share in the domestic sales market,” Masatoshi said. He believes that Japanese makers will now “aggressively” move small (but not mini/kei) car production to Mexico (where Honda, Nissan have plants and Toyota is planning one for 2019). Japanese makers will also ramp up small-car production in Thailand to address its current undercapacity there, IHS predicts.

A high-tech futureThe future for Japan’s assembly plants is likely to be in higher-tech cars, IHS believes. “This will help Japan accumulate the cutting edge technology and maintain employment in the long term,” Masatoshi said. One example is the recent introduction of hydrogen fuel cell vehicles, which have moved from prototype into small-scale production. The most high-profile is the Toyota Mirai, which is built at the company’s Motomachi plant, one of 10 production plants within the sprawling Toyota City conurbation in Aichi province near Nagoya some 300km down the coast from Tokyo. The plant itself was built in 1959 and according to Toyota was the first dedicated passenger-car factory to built in Japan.

Mirai production started late in 2014 in a dedicated facility within the plant that once built another high-tech marvel, the Lexus LFA supercar. It’s not exactly mass-production. The plant builds around three a day, but it’s more than the 500 the LFA topped out at.

Production of hybrid, electric and fuel-cell cars will become much more important, predicts analysts LMC Automotive. “The government has put in place strict environmental regulations in a bid to increase fuel efficiency and reduce polluting emissions, which will lead to many new models being fitted with hybrid systems,” said Methin Changtor, manager for Asia-Pacific powertrain for LMC.

Last year Japan made 722 fuel-cell vehicles, according to LMC figures, and the firm predicts that will rise to 2,500 this year and 10,000 a year by 2020. Changtor points out that fuel-cells are the Japanese government’s preferred option for vehicles in a planned ‘zero-emission society’. Pure electric vehicle production stood at 16,256 last year, with LMC predicting 37,000 this year and 100,000 a year by 2020. The government started promoting ‘clean-fuel’ vehicles back in 2009 using a combination of tax incentives and subsidies, with the result that there are now around 6.3m of these eco-friendly vehicles on Japan’s roads, or 8.1 percent of the total.

Hybrid-petrol cars such as the Toyota Prius are by far the most popular with 960,000 sold last year according to JAMA figures, with plug-in hybrids running well below that at just 15,000. Interestingly, Japan still rates ‘clean diesels’ as an environmentally-friendly alternative, and 154,121 were sold last year as cars.Along with the cars, the makers have pledged to reduce CO2 from the plants the cars are made in. JAMA’s members along with those belonging to the Japan Auto-Body Industries Association (JABIA) have said they will reduce their combined emissions form plants as well as research and administrative facilities to 7.09m tons of CO2 by 2020, a 28% reduction from 1990 levels, and to 6.62 tons by 2030 (a 33% reduction). JAMA figures show the levels actually rose between 2009-2013.

Exporting productionJapanese makers now make far more cars abroad then they do at home, a trend that has accelerated massively the last few decades. In 2015 overseas production from Japanese makers reached a new record of just over 18m according to JAMA figures, or around double that of local production. Back in 2000 that figure was just 6.3m. The biggest growth areas for factory building have been Asia and Latin America, with Asia (outside Japan) by far the biggest production base with 109 assembly plants. 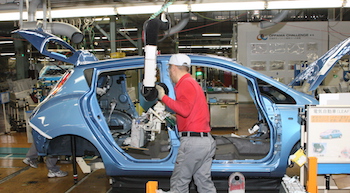 At Nissan’s under-utilised Oppama plant, pilot lines are set up to test production of new vehicles ahead of full assembly overseas

For some makers, the rest of the world has become a far more significant part of their business. Nissan for example produced 435,938 cars globally in May this year, of which only 65,309 were built in Japan (and 41,321 of those were exported). Toyota is the maker most still anchored in Japan, with local production of 3.99m and 4.59m in the rest of the world for the financial year ending 31 March. Its overseas production overtook domestic production in 2007.

Honda in its 2016 company report for the same financial year said it generated only 12% of its revenue from Japan, while the US accounted for just over half. It’s worse for motorcycle production. From a peak of 7.4m produced in 1981, Japanese makers built just 597,058 bikes in 2014 as they expanded production in markets like India, Indonesia and Thailand.

But Japan remains the spiritual home of manufacturing for the local makers. Nissan has found a new use for the space vacated by closing lines at its under-utilised Oppama factory around 50km southwest of Tokyo by setting up pilot lines to test production of new vehicles ahead of full assembly in its global sites elsewhere. It trains foreign operatives here and considers it the ‘global mother plant’ against which all other plants have to match up to.

Exports remain the bedrockWith around half of the vehicles Japan builds being exported, it’s clear the country depends on overseas markets to keep its key local industry strong. By value it’s worth more than that. Last year the 4.6m total included 4m cars (up 3.5% on the year before) of which 3.8m were classed as standard, as opposed to ‘small’ or ‘minicar’. That means they were higher value than the local market cars. Indeed just 4,505 of the budget kei-cars were exported, according to JAMA figures.

The total value of cars made in Japan last year was the highest in 2007 at 15.9 trillion yen despite the quantities produced coming in lower than the last three years. The US is by far the biggest market for the higher-end cars that Japan exports, such as premium Lexus models or SUVs. The country took 1.6m Japanese-built cars last year, over double the country’s second biggest export market of Europe.

One maker exporting to the US (despite having well developed local production plants) was Nissan, which aims to sell 100,000 of its Rogue SUV (aka X-Trail elsewhere) annually. The model is made in the firm’s Kyushu plant in on Fukuoka province, Kyushu island, on Japan’s southern-most tip. The maker said it was key to its plans to bring its annual Japanese production levels to 1m a year. It’s a tough ask. To continue to shine, Japan’s gold-standard vehicle production network needs a full pipeline of high-tech, high-value and globally appealing vehicles as well as canny financial management on a government level.

The continual improvement philosophy that the Japanese car firms live by has brought them to the pinnacle of just-in-time lean manufacturing, but that has one huge drawback: one break in the supply chain means production grinds to a halt. Makers have worked hard to improve the situation after the chaos following the earthquake and tsunami in 2011 when production was stopped or slowed at hundreds of suppliers. Japan’s biggest maker Toyota said it has improved the situation by insisting on multiple suppliers for one component and keeping a record of supplier tiers below the immediate one. However the lack of stock supply means Toyota is still vulnerable and has already suffered shutdowns this year, most seriously in April when 26 car assembly lines were stopped as a result of supplier problems following a earthquake in southern Japan.

Back in February it suspended production at all assembly plans when an explosion at Aichi Steel’s Chita plant halted supplies, while in May another explosion, this time at braking system supplier Aisin Advics in Aichi province, also forced it to cut production at its Takaoka plant in Toyota City.