With a total throughput capacity of 750,000 tonnes of metal per year, it is no surprise to discover the automotive industry is a major customer of the Tata Steelpark 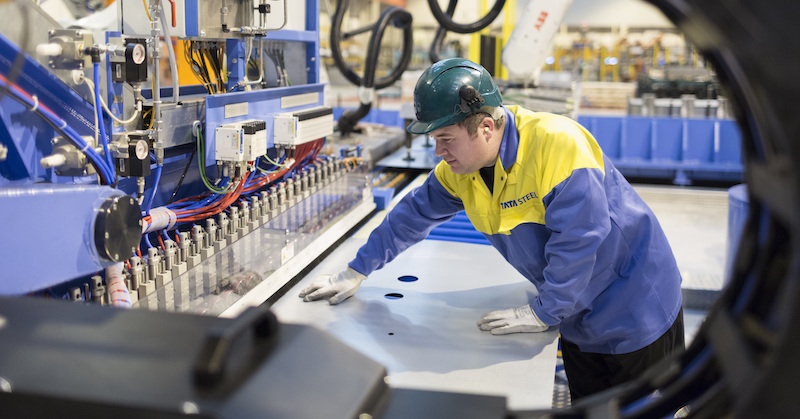 The Tata Steelpark near Wolverhampton, UK, is one of the major steel processing sites in Europe. Inbound, coiled steel from the company’s primary operations in Wales is delivered to the 50-acre site. The output is material with ‘added value’ as the result of operations involving cutting, shaping or welding procedures. Total throughput capacity for the site, which employs 525 people, is 750,000 tonnes per year.

Unsurprisingly the automotive industry is a major customer for the site, part of which – the Automotive Service Centre – is dedicated to meeting the requirements of a range of OEM and tier supplier clients. Current names on that list include, JLR, BMW and Ford.

One type of product for which the automotive industry has an increasing need is tailor welded blanks (TWBs) in which two or more pieces of metal of different thicknesses or formulations are welded together to produce a workpiece for further processing.

The defining characteristic of the resulting TWB is that by combining different pieces of material in this way the blank can have different properties – for instance basic strength – in different areas. An obvious benefit is that there may then be no need for surplus material in regions of the final product that are subject to minimal loading, with consequent reduction in overall weight.

Adding a new dimensionThe Tata site has been aiming to satisfy demand for TWBs since the earliest days of the technique’s availability. Its first foray into TWB production came 20 years ago when £1.7m ($2.1m at today’s rate) was invested in a ‘1D’ installation for the production of prototype and pre-production panels – the 1D designation meaning simply that it could apply only straight line welds. This was followed in 2000 by a ‘2D’ facility capable of processing 300,000 units per year – the 2D designation indicating that it could produce curved or undulating weld lines.

Over the last three years, though, those initial forays into TWB production have been supplanted by two much more capable installations. First, in 2014, came a new 2D installation representing an investment of £4m and capable of an output of 750,000 units per year. But now Tata is in the ramp-up phase for a new TWB installation, costing a similar amount, that will more than triple the site’s output capacity to 2.3m units per year.

The distinguishing feature of the new TWB line is that, like the very first such venture into the technology at this facility, it is a ‘1D’ installation. However, as director of automotive and business excellence Lee Coates makes clear, this apparent reduction in flexibility in fact represents a quite deliberate increase in one capability above all – “speed”. The new installation, he confirms, can operate at a rate that would enable it to produce as many as 600 door inner blanks per hour – each one of which would, in fact, be a combined left-hand and right-hand blank that would be cut in half to produce a matching pair.

That is exactly what it will be doing for one of its launch products – door inners for BMW Mini. These will use two sheets of CR3+GI 50/50 steel – one 0.8mm in thickness and the other 1.2mm. Both sheets are cut to their required pre-welding shape on site and also have ‘burst holes’ cut into them, which are intended to facilitate ease of further processing when they arrive at the customer plant. For smaller parts, such as door pillars, Coates says the line could quite feasibly double that throughput to 1,200 parts per hour. The basic facts and figures relating to the new line’s performance are that it can handle parts in a width range from 400-3,000mm and with a material thickness from 0.6-3.0mm for steel and 0.9-3.0mm for aluminium. The maximum blank length is 3,600mm.

24-hour operationBoth installations will be utilised, Coates says, through a 24-hours-a-day operating regime over five days of the week. Weekends, he confirms, will remain reserved for maintenance work and occasional production operations if for some reason the weekdays cannot meet demand.

Like its companion predecessor, the new line is completely automated. It essentially comprises a central conveyor system that is fed with blanks transported to it by forklift truck. At its front end are two pairs of ABB robots – four in total – that retrieve the parts to be joined together and place them abutting each other on the conveyor.

This then moves the parts under a fixed 6kW disk laser, which welds them together along the programmed line, after which the welds are examined by two in-line inspection devices. At the other end of the installation are another two pairs of robots that remove the parts in an inversion of the loading procedure.

In fact, adds Coates, the only essential difference between the two installations in physical terms – and the one that enables the 2D capability in the earlier one – is in the way the workpiece is manoeuvered under the laser. In order to achieve curved wild lines, a table capable of lateral movement is used. As such, the greatly increased capacity of the new 1D installation is, he explains, simply the consequence of the reduction in time needed to apply the welds, rather than any step-change enhancement in its sophistication. Nevertheless, Tata makes the claim for the line that it is one of the “few in the world” that can attain this level of performance.

Multiple-weld TWBsAnother important point to note is that it is perfectly possible to create TWBs with multiple welds simply by repeatedly passing the workpiece through the line and adding a new section on each occasion. This is exactly what Tata will be doing with another part that will be produced on the line – a luggage tray. According to Coates, the final part in this case will be made from five different sections and so will require the application of four welds in total. There is, he indicates, no practical limit to the number of times a workpiece could be processed in this way other than that at some point the cost of the resulting part might become prohibitive.

"The new installation can operate at a rate that would enable it to produce as many as 600 door inner blanks per hour" - Lee Coates, Tata

As far as Tata itself is concerned, Coates concedes that the high level of automation involved does not in any way de-skill the process. Indeed, effective implementation of the technique requires “a greater level of operator expertise” than might otherwise be the case. The new installation was designed and installed by German company Lasertechnik.

Interestingly, says Coates, there are no absolutely hard and fast rules about when a 1D or 2D approach might be more appropriate. In general, he explains, the 1D approach might be better for “smaller parts” but the determining factor governing which may be employed in a particular instance might well be the internal design philosophy of the vehicle OEM or possibly even that of an individual designer. Nevertheless, the fundamental objective remains the same in either case – ensuring appropriate use of materials so that the right type of material of the right thickness is used in the right way to achieve the overall goals of optimal performance and lightweighting.

New technology, new opportunitiesThe enhanced TWB production capabilities at Tata’s plant go hand in hand with ancillary activities aimed at promoting their use within the automotive industry. What is involved there is explained by one of Coates’ colleagues – head of marketing automotive Kevin Edgar, who indicates that Tata sees itself as responsible for keeping the industry up to date with developments in the technology and materials available for full exploitation of the TWB concept. As such, it forms an important element of the liaison work carried out by Tata both directly with OEMs and major tier supplier,s and of the educational work which, for Tata in the UK at least, is centred around the University of Warwick, where it has recently opened a new research centre. Moreover, Edgar stresses that the TWB concept is just “one of a basket of technologies” that Tata offers and that the company is not intent on according it a special status as he has no doubts that “there are opportunities for it in most vehicles.”