Energy management has been an important aspect of vehicle production for decades, but innovative new solutions that can be linked are proving extremely effective 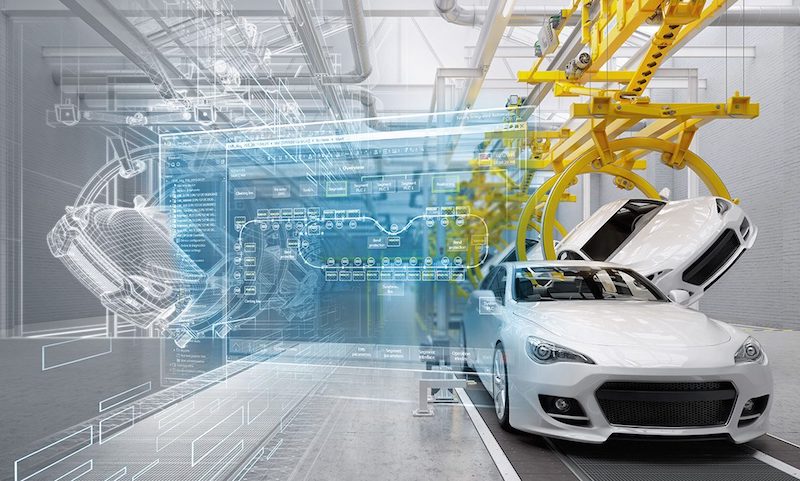 Road transport is estimated to account for around 17% of global greenhouse gas (GHG) emissions. Figures from the European Commission suggest that passenger car and heavy-duty vehicle emissions are responsible for 21% of all GHG emissions in the continent. As a result, carmakers are continuously pushed by governments to make their vehicles more eco-friendly.

But it’s not just the act of driving cars that causes damage to the environment. Producing them also has a significant impact, and therefore, numerous ways of minimising this impact are currently being implemented in manufacturing facilities around the world. The use of energy management techniques is one example, and has yielded some impressive results over recent years.

Digitisation is becoming increasingly integral to production facilities around the world. Although many still rely heavily on manual processes, workers are becoming more efficient with the help of digital tools, as are robots. Data from these tools can prove useful for energy management.

Siemens recently installed its Simatic B.Data energy management system at a GF Casting Solutions plant in St. Gallen, Switzerland, where it makes die-cast parts out of aluminium and magnesium alloys for the automotive sector. The system allowed GF to track the amount of electricity, water, gas or compressed air that was being used in each individual machine, and when it was being used.

For example, two die-cast machines were found to be consuming 4,500m3 of compressed air over the weekend, despite not being in use. “Such an amount is hardly noticeable,” explains Bernhard Thaler, energy manager at GF. However, it soon added up over the course of a year, and the company was therefore able to make a significant energy saving by highlighting and eliminating the waste from the two machines.

The team was also able to identify the energy that was saved when converting their eight furnaces from oil firing to propane gas. In one aluminium melting furnace alone, energy consumption was reduced by 630kWh per ton, while CO2 emissions were reduced by 16% and NOx by 40%.

After achieving notable energy savings as well as emissions reductions, GF said it was keen to examine the potential introduction of the system at its other facilities. “Among others, an interesting benefit lies in the fact that this energy management solution is not only scalable, but also supports cross-plant utilisation,” Thaler emphasises. In short, GF could connect each of the systems at various plants, allowing the company to pinpoint which are performing well and which could be improved.

According to Michael Nebauer, project manager for EDP and communication technology at GF, the installation process at the St. Gallen plant was straight-forward and should be easy at other facilities. Control boxes and interfaces were attached to each die-cast machine and furnace. These gather data on the processes and the energy used, which is then sent to a server and accessed by a standard web browser. “Thanks to installation on a virtual server and setup of energy data transfer via a virtual network environment, we were able to realise a cost-favourable infrastructure for the energy management system,” he adds.

Of all the different areas of vehicle production plants, the paintshop consumes the most energy. That’s according to Bill Sarver, senior consultant, global automotive at Rockwell Automation.

He believes that nearly all carmakers are examining ways to make their paintshops more efficient: “Companies are moving away from running multiple ovens and curing individual layers of paint before applying the next layer. Most automakers are migrating to Ford’s model, where you apply multiple levels of paint before they are then cured.”

In the November-December issue of AMS, numerous experts outlined innovative ways of enhancing paintshops, such as PPG’s technical director William Brunat and Luigi Lazzari, executive director at Geico Taikisha. Among the solutions are paint that cures at a lower temperature and new heat-pump technology.

Rockwell worked with vehicle manufacturers to develop a modular paint rectifier that reduces paint use while also minimising energy consumption. “It works by creating a profile for each vehicle, so instead of having a static algorithm with the same amount of paint applied across each vehicle, it allows for the adjustment of paint application for each individual vehicle,” Sarver explains. “When no vehicles are being painted, the system can turn the rectifiers off so they are not consuming any energy. You can then take that concept and apply it through the whole process. This works by detecting the location of a vehicle and turning power systems off, or putting them in a controlled state where they consume less energy, when the system says they aren’t going to be used given the vehicle’s location.”

The company also has a software tool that can be used to enhance air flow, temperature and humidity. It was previously used in the food and drink industry, but Sarver says it is now proven to cut the amount of energy used in the paintshop. Both the paint rectifier and control software can be connected to Rockwell’s FactoryTalk VantagePoint system – a web-based system that enables in-depth data analysis.

In the hope of reducing energy consumption in production, several OEMs have published reports that summarise their goals and also describe some of the recent challenges they have been addressing. For example, in April 2018, Groupe PSA published its 2017 Corporate Social Responsibility report (CSR), which includes a detailed section on the carbon footprint of its manufacturing operations. The company found that energy consumption at its European sites increased by 1.5% between 2015 and 2017, in line with a rise in vehicle production by 6.6%.

A primary concern, the report reads, was a sharp increase in the use of coke – a fuel with a high carbon content made by heating coal in the absence of air. This is used at PSA’s casting facility in Sept Fons, which is in central France, to develop iron.

Despite the increase in energy used, the OEM managed to save around €2m ($2.27m) in 2017 by implementing energy consumption control measures. “The main actions,” it said, “were implemented at Vigo.”

Located in Galicia, north-west Spain, the Vigo plant is home to the production of the Peugeot Partner, Citroën Berlingo Van, Opel Combo, Citroën C4 Spacetourer, Citroën C Elysees and Peugeot 301. It will also be where PSA builds a C-Van for Toyota Motor Europe (TME) from the end of 2019.

The primary focus for energy saving at the Vigo plant was to recover heat from the paint ovens, preheat the air during the painting processes, and streamline water heating. These three steps alone allowed the OEM to save around 20,000MWh of gas. However, additional measures also allowed PSA to save cash while at the same time easing pressure on the grid.

These included light control systems based on the presence of people. When workers down tools for lunch, sensors detect no movement in the building and the system automatically switches the lights off. Another energy management method was to lower settings on the compressed air units during the weekend.

Other OEMs have found that similar measures have been effective in improving energy consumption at their facilities. Back in 2015, Ford commissioned ENGIE – a UK-based energy provider – to analyse energy consumption at the carmaker’s Bridgend engine plant in Wales. As well as helping to make the facility more energy efficient, the analysis found that several pieces of equipment could be operated at different times of the day in order to avoid peak energy prices, such as battery chargers, extractor fans and chiller compressors.

ENGIE also worked with Ford to redesign the steam generation system at its plant in Dagenham. The old, manually operated boiler was replaced with a more efficient automated system at a cost of around £5m ($6.36m).

In its 2017/2018 sustainability report, Ford revealed plans to lower the greenhouse gas that is emitted from its manufacturing plants. It highlighted three key areas of focus: assessing and improving how facilities operate, collecting and managing data and analytics, and securing a reliable supply of energy. The OEM is also planning to achieve a 30% reduction in water use per vehicle produced by 2020 when compared to 2015 levels; eliminate landfill waste; and help lower the environmental impact of its supply chain.

While various energy management systems may prove vital to reducing emissions in vehicle production, several OEMs are focusing on the fundamental characteristics of the energy they use in production in order to keep emissions low. As a result, they are looking to move away from the use of fossil fuels to power production facilities and instead rely more on renewable energy. Volkswagen, for example, revealed its ‘TRANSFORM.TOGETHER’ production strategy back in September 2018 at an event held in Berlin, which was attended by 500 managers from the company’s 17 vehicle plants. The primary goal of the strategy is to achieve a 30% increase in productivity by 2025.

Commenting on the target, Andreas Tostmann, VW’s board member for production, suggested that the standardisation and simplification of production operations would be key. He added: “Our factories must become faster, leaner and more efficient: in terms of factory costs per vehicle, investments in new resources and products, as well as hours per unit, i.e. the number of hours spent by production and non-production-related units on building a vehicle. We will be making massive reductions in factory costs and investments, for example by reusing existing resources and factory structures and through systematic standardisation. That is how we will be cutting investment by €1.5 billion ($1.7 billion) compared with today’s level.”

However, some serious investments are being made by the company. For example, it is installing new gas and steam turbines at its Wolfsburg plant in order to replace the old coal-fired boilers at a cost of €400m. This could reduce CO2 emissions for heat and power generation at the facility by 1.5m tonnes per year.

At the 2018 Efficiency Summit of the Institute for Energy Efficiency in Production, which was hosted at the Mercedes-Benz Sindelfingen plant, the German OEM promised that all its production facilities would operate as CO2 neutral from 2022. Mercedes said it would use renewable sources such as wind and hydropower instead of generating electricity from coal power plants.

This is already the case at the Hambach plant in France, where the company currently makes the smart fortwo. It will also soon house the production of a new compact electric car under the EQ brand. The Mercedes full-flex plant in Kecskemét, Hungary, also has CO2 neutral energy supply, as does its engine plant in Jawor, Poland.

Eco-friendly car production is also one of the main themes of Factory 56 – a new extension to the Sindelfingen plant that is currently being built. It includes a photovoltaic system on the roof that produces green electricity as well as various other energy-saving technologies, such as highly efficient LEDs and turbo compressors for central compressed air generation. According to the OEM, CO2 emissions from the factory will be around 75% lower when compared to its Sindelfingen plant.

It is clear that, while energy management systems can have a significant impact on the efficiency and emissions output of manufacturing operations, OEMs have realised they must also look to cleaner forms of energy in the first place. And as some renewable energy sources are temperamental, intelligent management systems could play an increasingly vital role to ensure car plants aren’t left without power.