After several huge servo press installations this year, we assess the impact of machine size on stamping 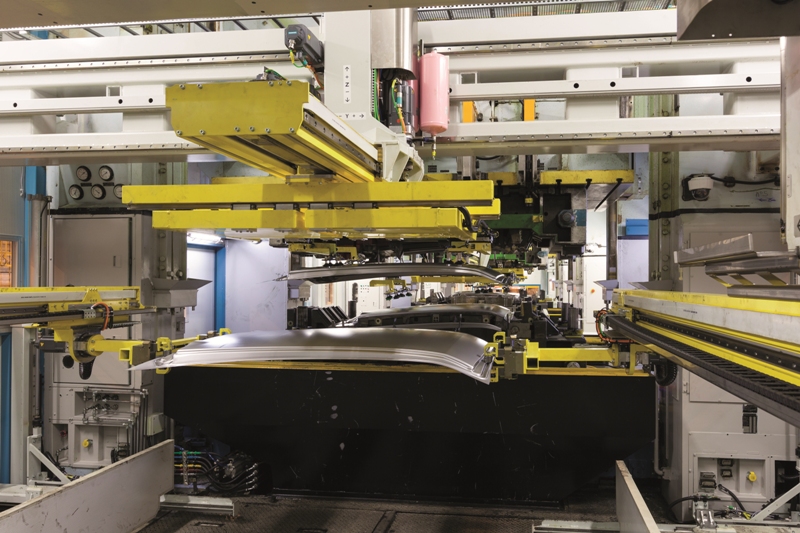 There’s no doubt about it: servo transfer presses are getting noticeably bigger. Of course, press beds need to be large because parts are transported through several stations during the forming process, but some of the installations that have taken place in 2014 are truly exceptional.

For instance, automotive supplier Paul Craemer, based in Herzebrock-Clarholz, Germany, recently launched production on the largest servo transfer press that Schuler has ever built. The press line measures 11 metres in height, 15 metres in length and eight metres wide. Furthermore, it weighs almost 1,000 tonnes. Craemer is using the line, with its 8.0-metre by 2.5-metre press bed, to manufacture structural parts such as car seat shells. In the past, Craemer used two in-line presses, linked by three automation systems. The fact that the same process is now handled by just one machine enhances the overall reliability of the line significantly, especially as parts no longer have to pass from one press to the next.

Within the enormous new line, parts are transported by a tri-axis transfer system supplied by Schuler Automation with an equally impressive span of more than 10 metres. Its extremely low vibration is said to ensure fast and reliable part transfer; a prerequisite for this reliability is the integrated active vibration dampening (AVD) system developed by Schuler. Each of the motors delivers over 500kW of power to generate a total press force of 25,000kN.

In view of the scale of the servo press, it’s little wonder that it took nine days to transport it from Schuler’s plant in Erfurt to the customer’s base in East Westphalia – via ship, two special cranes and three trucks with 16-axle trailers. Once at Craemer’s facility, the press bed was first lowered into a pit six metres deep in a specially constructed production hall. This was followed by a 3.5-metre slide and 4.0-metre crown, before all three components were fixed in place using four tie rods. It took Schuler experts around four months to complete the construction.

The huge press is already the fifth line with Schuler’s ServoDirect Technology being used by the Craemer Group. “This highly productive acquisition will enable us to secure our market leadership for future projects,” says Siegbert Geldner, managing director for production and technology at Craemer. “We are confident that this line will soon pay off for us.”

JLR’s new giant at Halewood
Earlier this year, Jaguar Land Rover (JLR) invested £45m in a huge new line at its Halewood plant in the UK for the stamping of both steel and aluminium panels. The new servo stamping system, the first of its kind to be built in the country, is 13 metres tall and more than 85 metres long. It has a combined press stamping capacity of 7,900 tonnes, making it the fastest and one of the biggest and most powerful press lines at JLR.

Installing this giant machinery required a major reconfiguration of the 30,000 sq.m Halewood press shop, with the roof raised by almost 12 metres and the press shop bay extended by almost 50% compared with the previous stamping set-up. Supplied by Aida, the new press will offer up to 20 strikes per minute when commissioning is complete this autumn.

“This colossal new press line reinforces Jaguar Land Rover's long-term investment in UK manufacturing,” says Richard Else, operations director at Halewood. “It ensures we can make more panels even more efficiently, and will continue to do so for many years to come.”

In contrast to the more mechanical operation of previously installed Halewood presses, the direct drive servo system can handle higher tonnages in addition to working at faster speeds, allowing JLR to increase the volume of stamped parts. The new line also uses less power and incorporates a recovery system that captures energy from the draw action and converts it into electricity.

Furthermore, the design of the Aida press allows for faster die changes – just as well, considering that the shop has 234 die sets. Changes can be achieved in less than five minutes, compared with up to 55 minutes for the largest existing mechanical press line at Halewood. This will improve the flexibility of the press shop, as well as increasing the stamping capacity, speed and volume of panels that can be produced on a daily basis. The shop, which incorporates ten fully automated press lines, runs 24/7 on a four-shift basis and produces around 700 panels every hour, amounting to 25m a year. In total, the facility completes around 18m steel hits per annum, plus almost 1m for aluminium.

Adding automation at Nissan Sunderland
In fact, there are plenty of existing large press installations that can provide an impressive boost to throughput, with the help of additional functionality or automation. One such case can be seen at Nissan Sunderland, UK, where automation supplied by AP&T is set to contribute to an increase in production capacity by about 900,000 large car body parts per year.

Nissan Sunderland is one of the largest car plants in Europe, producing around half a million cars each year. As a means of keeping up with demand, the management recently decided to increase the capacity of the plant’s press shop. The choice was either to modernise Nissan’s own process or to purchase body parts at a significantly higher cost from subcontractors. Since the Komatsu presses in the tandem line were in good shape, a decision was taken to keep them but add new automation.

The solution was to reduce the number of original presses in the tandem line from five to four. Together with a destacker and ten SpeedFeeders supplied by AP&T, the remaining presses now constitute an integrated line with high capacity that is used to manufacture large panels for doors, roofs, floors and trunks in the Qashqai, Juke and Note models. This turnkey solution included an automated system for changing tools and grippers, in addition to project management, installation, start-up and training.

The upshot is that the pressing rate of the Komatsu machines has increased by 45% over manual operation, and there remains potential for improvement. Furthermore, the total cycle time has been reduced thanks to a less complex tool design, while the automatic system for changing tools and grippers has cut set-up times in half. The noise level in the press shop has also dropped – greatly improving the working environment and adding to the overall positive outcome.

The latest trends in press technology are being fuelled by new materials which demand more energy and higher precision. Komatsu claims to have set the pace of the modern era by introducing its servo technology in the 1990s. According to the company, its servo press is not simply a mechanical press retrofitted with a specially-made servo motor but a completely integrated press system.

The first automaker to invest in Komatsu servo technology was Toyota, which has now implemented the machinery at sites across the world, with plans to retrofit many older plants as well. "What we’ve seen with our Komatsu servo presses is that we have very good repeatability,” says Scott Buchanan, manager – stamping engineering and body production engineering at Toyota Motor Engineering & Manufacturing North America. “We can take a die manufactured in any of our die shops around the globe, set up our data, and get identical repeatability with very little try-out time, which ultimately reduces our lead-time to the market.”

He continues: “Our intention from here on out is to utilise this same technology in any of our new expansion plants in North America. We’ll also use it as part of our retrofit process when our mechanical power presses hit the end of their life cycle.”

According to Komatsu, many others in the supply chain have followed suit, including Waukesha Metal Products, based in Sussex, Wisconsin. “In today’s automotive manufacturing environment, doing more with less is not just a turn of phrase, it’s a way of life,” says Rob Bauer, engineering manager at Waukesha. “With Komatsu servo technology we’re able to have complete control of the ram speed and motions of the press in ways not previously possible.”