As Audi hails a new matting technique for its R8 vehicles as a finishing innovation, AMS digs up the details 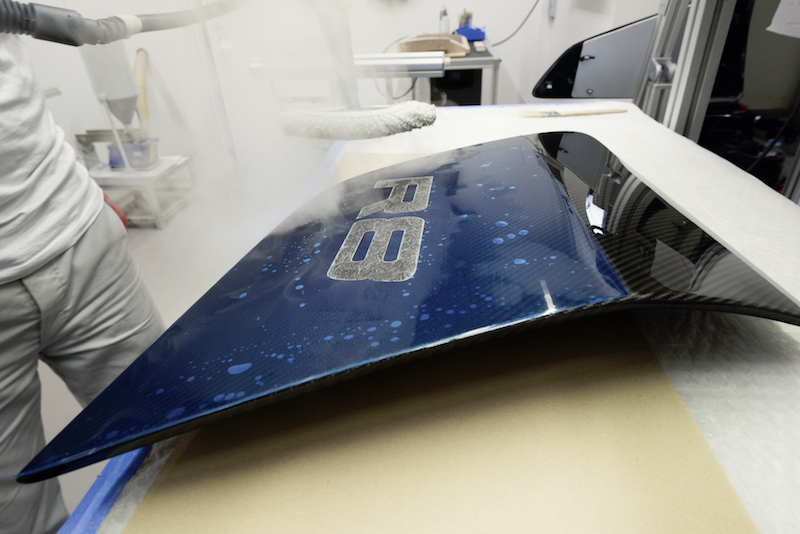 All customers want a flawless paint finish to their new car – a uniform, generally glossy appearance without any hint of inconsistency. The main choice that needs to be made is the colour. But some buyers may want even more than that: the ability to add unique, personalised graphics such as their name or an image. If the car in question is an Audi R8 Coupé or Spyder, they now have the option to do so. The vehicle-maker has recently initiated a process at its headquarters plant in Ingolstadt, Germany, which enables such additions in a subtle and stylish form that suits the upmarket image of these models.

The technique in question does not simply involve the application of a transfer or an extra layer of paint. Instead, it is a partial matting process in which a fine abrasive spray is applied under strictly controlled conditions to produce a pattern in the uppermost region of the clearcoat comprising the outer layer of the vehicle’s paint system. The pattern modifies the brilliance of the paintwork and the intensity of its sheen by reflecting light from the treated area in a diffuse manner through its ‘individualised’ surface elements. Unlike a transfer, the pattern is highly robust and weather-resistant because it is effectively an integral part of the paint finish.

The technique involves some manual as well as automated work

"The goal was to reach optimal matting properties regarding contrast, homogeneity and durability” – Ehard Brandl, Audi

Ehard Brandl, paint specialist at Audi’s Technology Development operation, explains to AMS that the process involves a mixture of skilled manual work and automation, such that its development was a lengthy and complex project.

“It took around two-and-a-half years from the initial idea to the ability to produce serial parts,” he reports. “The main challenges were to design the machinery and adjust its process parameters, while the goal was to reach optimal matting properties regarding contrast, homogeneity and durability.” He indicates that two particularly important suppliers were involved in the project; one was responsible for the design and manufacture of the equipment, while the other took care of the masking with foils.

Implementing a precise processThe procedure comprises a number of discrete steps. First of all, a clear plastic film is manually applied to the surface to be treated, using steam to ensure good adhesion. This film is thinner in the areas which represent the final design. Then the workpiece-film combination is mounted on a skid that is passed through a vacuum cabinet and underneath a nozzle with four outlets which spray a fine powder at the film. The thinner areas of the film are removed by the impact of the powder while the thicker ones remain intact, so that the spray can then abrade the lacquer of the workpiece and impart the required pattern.

The process is extremely precise; the abrasion affects only the top five to eight micrometres of the lacquer, which itself is just 50 micrometres thick. Though the resultant pattern is clearly visible, it is so fine that it is claimed by Audi to be nearly imperceptible to the touch. Importantly, the underlying basecoat is undamaged and still covered by the clearcoat layer. “Generally, the colour or chemical basis of the basecoat does not have an effect on the technique,” confirms Brandl. “The matting only affects the upper layer, in other words, the clearcoat.” But he does concede that the end result tends to be better with darker colours.

Another plus point is that no special characteristics are required for the clearcoat in which the design is etched. “The process works with the standard thickness and formulation,” confirms Brandl. “This is a major reason why it is so attractive for series production.”

Brandl is confident that the procedure is genuinely innovative. “Such an approach of matting painted parts is new, especially in the automotive sector,” he states. “Therefore, several patents are currently pending.” He says the “core know-how” for the process encompasses both the nature of the abrasive material used to etch the design and the wider equipment that houses it. “The machinery is unique and was specifically designed for the matting of Audi R8 sideblades,” he explains, adding that the OEM will not disclose further details.

Current and future applicationsThe technique can be used to apply almost any pattern a customer might want – providing that it does not infringe any copyrights. The most obvious type of design would be lettering such as a set of initials, though a photograph could also be used. “Ideally a vector graphic file (.eps, .ai, .dxf) needs to be supplied, but typical image formats (.jpg, .tif, .png, .bmp) can be used as well,” says Brandl. The key factor, he stresses, is that the customer has the legal right to use the motif.

So far, the process is only being performed in the Ingolstadt paintshop and is limited to components up to 1.0 x 1.0 metre in size, with the area that can be etched in any single operating cycle being 0.5 x 1.0 metre. The R8 sideblades are the first vehicle elements for which the service is being offered, but Audi intends to roll it out to other models. 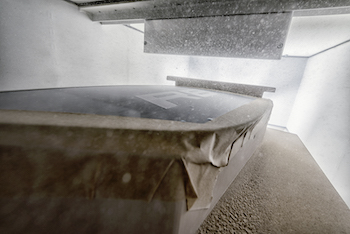 Blasting the workpiece with powder abrades the film on top

Future plans also include upgrading the automation level of the procedure. Brandl says that, in the current routine for the R8 sideblades, the process is offline. “The detached sideblades are matted separately in the paintshop and delivered to the assembly line afterwards,” he explains. However, Brandl says the lead time for a set of the final sideblades is still only around two weeks, which is considerably shorter than for the car itself.

One important factor helping to compress the cycle time is that the machine does not have to be programmed for each new set of sideblades, since it is the plastic film which creates the design. This is produced by a supplier which uses ultraviolet light and a pre-press based on the desired image. The current cycle time for the procedure at Ingolstadt, Brandl indicates, is a matter of minutes.

The extension of the process will not be restricted to exterior elements whether of R8 models or other Audi vehicles. “Interior parts can be matted too,” Brandl confirms. However, this will require new hardware. “For other applications in the exterior or interior of the car, a completely different machinery will be installed which could work online,” he states. “Full automation is possible by a different matting approach and that new approach is already approved.”