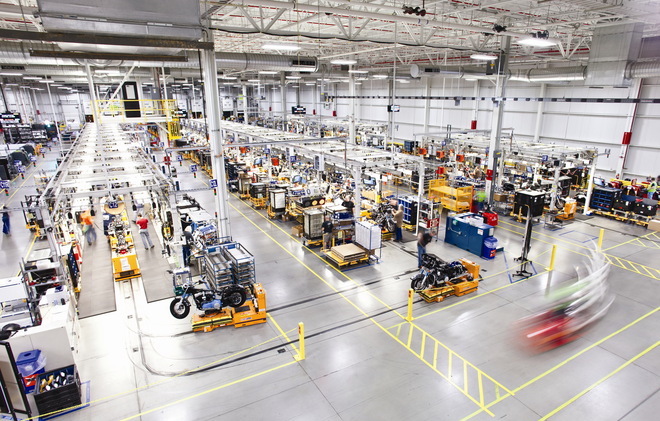 Historically, the automotive industry has relied heavily on the use of robotic technologies for pure manufacturing operations like assembly, welding and stamping, but in recent years other applications such as automated guided vehicles (AGVs) have become more popular in production facilities.

AGVs are typically forklift-sized wheeled carts that use software to help in navigating their movements around manufacturing plants and assembly facilities, often with the assistance of magnetic strips or lasers. So, what types of automotive manufacturing applications can AGVs be used for? What are the main advantages and challenges of using them? And what are likely to be the key innovations and trends in the use of AGVs for automotive manufacturing applications over the next few years?

Line feedingAGVs are operator-less transport systems that are frequently used to move large loads and trailing loads with a low-to-medium throughput over short-to-medium distances. They have very diverse forms and functions – with some manufacturers also producing automated guided carts (AGCs) or vision-guided vehicles (VGVs) – but they tend to converge in their ability to carry goods autonomously along pre-defined or dynamic routes.

AGV systems are increasingly used in facilities such as manufacturing operations and parts distribution centres where, among other things, they help to limit heavy goods handling by operators and to ensure a safer environment. One heavy user of AGV systems is DHL, which has AGVs in its vehicle assembly facilities to better manage line-feeding activities including the just-in-time (JIT) transportation of parts from plant inventory to assembly line.

As Fathi Tlatli, ‎international manager at ‎DHL Customer Solutions and Innovation, explains, the chief purpose of AGVs in a manufacturing environment is to focus on JIT replenishment of the lineside. According to Tlatli, DHL has already worked with several automotive OEMs in implementing and developing AGV solutions. Although he believes their use usually brings "clear performance improvements" across the board, he claims they are especially good at performing in certain specific areas: the repetitive movement of materials over a distance; the regular delivery of stable loads; processes where tracking material is important; and when on-time delivery is critical and late deliveries are causing inefficiency.

"DHL is also currently involved in various pilot projects together with its business partners. These pilots are aimed at exploiting the advantages of new technologies such as microprocessing, low-cost sensors and Big Data analytics in order to develop new robotics applications," says Tlatli.

Route navigationAnother company that is heavily involved in the provision and application of AGVs is US company Seegrid, which has developed an infrastructure-free VGV – which does not require infrastructure such as wires, lasers, magnets, or tape – to help in improving safety, cutting labour costs and improving throughput productivity in manufacturing facilities. A Seegrid VGV can be "trained" and managed by in-house staff simply walking or driving the device through its desired route, where it captures camera images of the facility and builds a 3D map for route navigation. Once training is complete, the VGV is ready to transport pallets, carts, trains and totes around the clock.

According to Mitchell Weiss, chief technology officer at Seegrid, the company's VGVs are used by a variety of leading automotive manufacturers. One example is Daimler, which uses Seegrid VGVs to optimise its parts-to-line application, cutting waiting time for parts by 22% and transportation time for parts-to-line by 50%.

Although coy about the details, Weiss also reveals that an automotive customer located in the UK uses a fleet of VGVs to transport body panels from the stamping press to storage locations located over 1km from the press. Here, the VGVs deliver carted racks to a variety of storage locations, travelling between buildings, doorways, and working alongside industrial truck operators before returning to the press line with empty racks ready for more work.

"The key benefit here is ensuring the uptime of the expensive stamping press by making sure the output stations are cleared continuously without any breaks or shift change issues," says Weiss.

Chassis marriageAlso in the US, Michigan-based Jervis-Webb (a subsidiary of Daifuku North America) – which partnered with Henry Ford in 1919 for some of the first-ever automotive assembly lines – manufactures an AGC product line for flexible magnetic tape navigational guidance. As David Noble, senior sales engineer at Jervis-Webb, explains, the AGV applications at automotive companies are numerous, ranging from the transport of whole cars and major components, like front-end modules, fascias, instrument panels and seats, through the assembly line to chassis marriage – where the chassis is synchronised with the car body – and the line replenishment of parts and subassemblies. 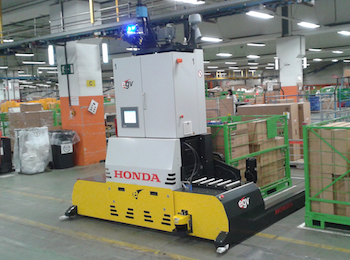 Noble points out that the company has provided AGV/AGC systems to most OEM automotive manufacturers – including Volkswagen, Nissan, Honda, General Motors, Chrysler, Ford, Toyota and Tesla Motors – as well as many tier one and two automotive suppliers, such as Johnson Controls and Magna.

Operationally speaking, he argues that AGCs are the type of automated vehicle most commonly used in automotive applications. In his view, the main reason for this is their ease of use and functionality when compared to the "complicated CAD [computer-aided design] programs and the frequent use of custom program coding used in many AGV systems."

"Owners of AGCs are true owners of their system and future. No longer is a customer held hostage to the automation supplier for changes. This not only saves customers a significant amount of money by performing changes on their own, but also means they can make the changes according to their schedule and not the AGV suppliers' available time," he says. Meanwhile, Tom Beach, president at Handling Specialty – another company that produces AGCs which use scanner technology to follow magnetic tape – agrees that vehicles like these are advantageous for customers who want the flexibility to alter the carts' patch and to be able to do so in hours.

Clear benefitsMore generally speaking, Gunter Van Deun, international business development manager at Egemin Automation, believes that there are a number of clear benefits to the use of AGVs. In his view, these advantages include increased operational efficiency through the JIT delivery of parts to production lines, as well as correct deliveries, 24/7 usage and maximum system availability. He points to a several further plus points, including reduced product damage, continuous confirmation of the whereabouts of each load and increased operator safety.

Tim Spang, vice-president operations at Seegrid, agrees that safety advantages provide technological, operational, and financial incentives to automotive manufacturers who use AGVs and VGVs – particularly since, according to the Occupational Safety and Health Administration, someone is killed in a forklift-related accident every three days in the US, where over 100,000 such accidents occur every year.

"Operationally, automotive manufacturers are already accustomed to, and astute in, the use of highly automated manufacturing systems that can treat the critical inputs and outputs of their assembly lines much like the lines themselves – measuring performance, quality and availability of material handling in driving line-level OEE [overall equipment effectiveness]," he says.

"Financially, labour savings are the obvious advantage and the primary driver of ROI calculated by most automotive customers, but as long as material handling to and from lines are manually driven, the hidden costs of line 'starve/stuff' can go undetected. Removing the opportunity costs caused by absenteeism, turnover, and the associated learning curve for manual material handling is another financial advantage that is often overlooked in typical cost justifications for VGV installations," he adds.

Tlatli highlights the fact that labour intensity is one of the biggest current challenges for both the logistics and automotive industries. For him, this is particularly true in view of the decline in the size of the available workforce as a result of shrinking population levels in the Western world.

"Indeed, for the first time in history, future populations will be smaller than past generations in mature markets. It is therefore vital for the automotive industry to find new solutions to complete labour-intensive and low value-added tasks," he says.

"For the first time in history, future populations will be smaller than past generations in mature markets... industry has to find solutions to complete labour-intensive, low value-added tasks" – Fathi Tlathi, DHL

In view of these facts, Tlatli believes that the diminished manpower needs and decreased incident risks, as well as heavy component handling capabilities and lower error rates associated with AGVs are especially beneficial attributes in in-plant and manufacturing settings.

In spite of these obvious advantages, Tlatli warns that the use of AGVs is not always straightforward. One limitation is the reduced flexibility of AGVs in the case of an unexpected event. Moreover, they require sometimes substantial upfront investment and plant environment adaptation and are unable to raise improvement ideas or spot mistakes in the way that people can.

A number of further challenges are possible in situations where multiple AGVs are employed in a single plant – often calling for the additional coordination of capacities offered by a vehicle management system (VMS). Fori Automation has recently installed multiple Dock & Lock Tug AGVs at Ford facilities in and Sterling Heights, Michigan, and Cleveland, Ohio, and will do so soon at Ford Mexico and the UK. Director of business development Martin Erni says the coordination capabilities of VMSs are "at the heart and soul" of a multiple AGV-based system

"This is because they are capable of managing each AGV and preventing gridlocks – while also receiving job orders from the plant host or MES [manufacturing execution system] and sending tasks or orders to each AGV, based on availability and proximity of the AGV to that particular work cell or area," he says. 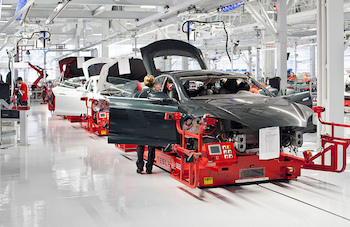 Future innovationsLooking ahead, Tlatli reveals that DHL is "actively exploring" new potential applications for robotics and AGVs within the automotive sector – and predicts that we are heading towards an increase in the use of AGVs in the future. However, he is unsure that we will ever see a completely operator-free manufacturing setting in the automotive sector and admits that AGVs must still evolve to cope with the diversity of automotive parts.

"The simplification of related IT systems and interfaces will also be key to establishing these vehicles in smaller facilities," he adds.

In the near future, Noble says that AGCs will continue to be used for flexible assembly lines. If the AGV or AGC is "operator ride-on equipped" he also suggests that line managers could potentially be more flexible with their staffing requirements, depending on the daily throughput requirements of a plant. "This provides opportunities for significant annual labour cost reductions compared to the traditional 'one person per station' inflexible fixed conveyor assembly lines," he says.

"We think that the delivery of goods to the assembly line will be a key process for AGCs. We feel that customers are happy to eliminate forklift trucks as they are costly, high maintenance and a safety risk," adds Beach.

Weiss also envisages an eventual reduction in the types of vehicles being used for material handling tasks, as he believes that VGVs will "absorb most of the horizontal transport of goods, allowing for a simpler mix of vehicles used for lifting and transferring tasks".

"We expect to see standardised parts carts that are transported to the line with a full kit of parts for one to two hours of production to each station on the assembly line. This will eliminate the operations of loading and unloading taking place in aisles. Carts will be configured in the central stores or supermarket areas of the factory and delivered directly to point of use at the line. The aisles will become less congested, transport times will be reduced, and labour and equipment will be fully utilised," he adds.

Further into the future, Erni thinks that we are also likely to witness more innovation in AGV guidance and power source technology, as well as within VMSs – to the extent that an entire MES or plant management system could one day operate in synch with AGVs: "The automotive manufacturing applications best suited to AGV technology moving forward are material lineside deliveries and any type of mechanical assembly systems, as well as within any future chassis marriage systems," he says.