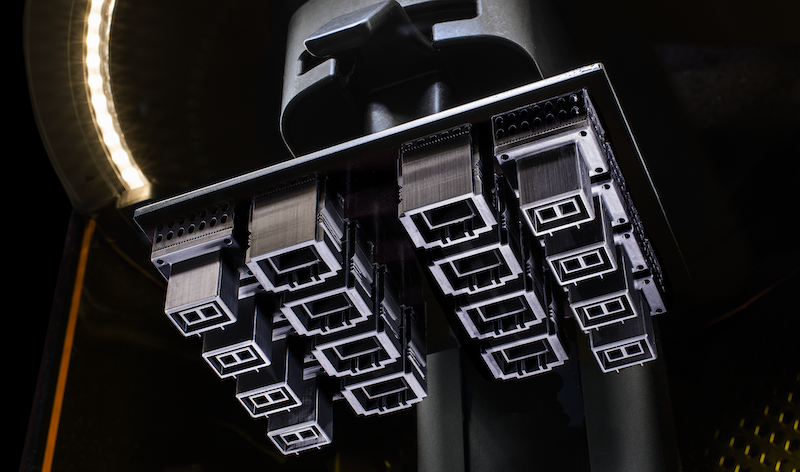 New items of technology often get hyped as being like something from science fiction, but in the case of one of the most innovative and unusual additive techniques now on the market, continuous liquid interface production (CLIP), the analogy is quite fitting.

This technology was first introduced to the market in 2015 by Carbon, based in Redwood City, California. Unusually one of the company’s co-founders was not an engineer but a professor of chemistry, Dr Joseph DeSimone, who is now its CEO. As he told early audiences learning about the process for the first time, an inspiration for it was the scene in the film Terminator 2 where a malign robot, reduced to a pool of liquid, simply reforms itself. Why, he wondered, could a piece of graphical fantasy not become an engineering reality?

• From prototype to production• Making metals add up

The technology the company has developed does precisely that. Essentially, it comprises a bath of resin that is illuminated from below by ultra-violet (UV) light, roughly seven to twelve times a minute, with each exposure effectively communicating the data for a geometrical cross-section of the intended part.

Two obvious differences between the CLIP process and conventional additive processes become apparent. The first is that a complete layer is formed simultaneously with every exposure rather than sequentially as would the case with, say, a laser tracking along a single path. The second is that the part is formed from below and not above as is usually the case, and as it is formed it is pulled up out of the bath through its attachment to the underside of a platen which is gradually raised away from the liquid.

But those visibly unconventional aspects of the process are not its only distinctive features and certainly not its most important. Instead the fundamental difference is that the materials it uses and the way it processes them mean it can be used as a versatile production tool. These include, for example, elastomeric, rigid and flexible polyurethanes, silicone, epoxy and urethane methacrylate that is particularly suitable for jigs and fixtures.

An invisible but essential enabling factor is that the window in the underside of the bath, through which the light is projected, is also permeable to oxygen, which enters the bath and becomes part of the chemical reaction that takes place there to facilitate the modification of the material to achieve required performance properties. So the technology might be described as a targeted small-scale chemical process to produce discrete engineered parts, though after they are retrieved from the tank and separated from the platen, parts are subjected to a separate, more conventional heat treatment, which is essential to fix their characteristics to meet required performance objectives.

The details are confirmed by Paul DiLaura, vice-president of sales for the Carbon. He does add, though, that the precise details of just how oxygen ingress is effected and controlled is “a crucial part of our intellectual property” and hence remains confidential.

DiLaura notes that there is also a further factor to how the process operates. Though CLIP is similar to established additive processes in that the information that drives it is a sequence of geometric ‘slices’, the parts themselves are continuously grown so they have no corresponding internal structure but are consistently homogeneous. “Parts are not actually made as series of discrete layers,” he states. “This means they have uniform properties in every direction and are completely isotropic.”

How this is achieved is the core ‘secret’ of the whole process. DiLaura says simply that the essential enabling factor is that the layer of resin in the bath immediately above the window remains in liquid form and that the parts are formed in it on a “gradient” of increasing solidity rather than in successive discrete stages. He points out that the basic concept is not in itself unusual. “There is a whole world of reactive materials out there already,” he explains, citing as an example commonplace epoxy materials that result from mixing together two components that are, by themselves, inactive. “We have taken that principle and added a UV component to enable the fixing of the geometry, and then the heat treatment to provide the physical strength,” he says. The heat treatment, he adds, “can take anything from four to fourteen hours depending on the material.”

Designed for automotive applications
The company now has two machines on the market – its initial M1 and subsequent M2 devices. Though the latter has a build envelope twice the size of its predecessor, the dimensions involved (189x118x326mm) still seem rather modest. But DiLaura says research carried out by the company indicated that for specifically automotive applications this volume is, in fact, surprisingly capable. “Based on internal analysis conducted by Carbon, we found that approximately 50% of the plastic components of a VW Golf can fit on our M2 printer,” he confirms.

That analogy underlines the fact that the company regards itself as a supplier of production rather than prototyping equipment, and that it sees injection moulding rather than any other additive technique as its main competitor. It is a perception exemplified by, for instance, the company’s recent release of a new material called Epoxy 82, which DiLaura describes as having the properties of a 20% glass-fibre-filled composite material even though it is itself a monolithic material. Typical automotive uses might be as electrical connectors or brackets. He adds, though, that Carbon is actively researching how it can use its process for genuine composite materials.DiLaura suggests that a crucial selling point for the CLIP technology is that it can fabricate parts with geometries that would be effectively impossible to produce by injection moulding, for example parts with lattice structures. Also, the company’s technology has already started to make headway within the automotive industry. DiLaura confirms that Ford and BMW, and component supplier Aptiv (previously Delphi Systems), are making use of it.

A perhaps less well known automotive customer is Proterra, a US electric bus-maker based in Burlingame in California’s Silicon Valley. The company has used Carbon’s technology (via Carbon’s own 3D printing laboratory) to make two particular parts – a dual purpose handle and a dash plate with a Proterra logo – in a rigid lightweight polyurethane material.

Positive results with small volume production
The details are confirmed by Joshua Stewart, director of customer engineering for the electric vehicle-maker. “For the handle, our engineers worked closely with Carbon to design it, iterate on that design and add texture for better grip,” he states. “The part now serves a dual purpose as a door switch handle and a functional tool to open access panels.”

With reference to the dash panels, he says that making such a large, complex part with injection moulding typically involves months of mouldflow and draft angle analysis as well as the cost and time needed for tool development.”

According to Stewart, the Carbon technology recommended itself for several reasons. “When we began to assess using 3D printing for our production needs, Carbon immediately stood out because of its range of production-ready materials, especially since we were looking to make low volume, end-use parts not prototypes,” he states. “Their rigid polyurethane (RPU) is a versatile and rigid material that’s great for a number of automotive applications.”

Moreover, time savings have been impressive. “We have lowered overall costs for the parts by 90–95% by eliminating the need for tooling,” Steward confirms. “But we have also successfully deployed them on buses in less than two weeks, inclusive of design iterations and shipping time, compared to three to five months for injection-moulded parts.”

An enabling factor, he adds, was that Proterra was able to design, validate and manufacture the parts on the same equipment in contrast to the traditional methodology in which additive machines would have been confined to prototyping before manufacture took place using non-additive techniques.

Stewart adds that in addition to the cost and time limitations of low-volume injection moulding, Proterra’s engineers were able to overcome another critical limitation of injection moulding. “Typically with injection moulding the tool-maker and materials supplier are two different entities so there is no end-to-end ownership of the manufacturing process, and this can leave critical knowledge gaps that can result in delays, a sub-par process and/or compromised final parts,” he explains. In contrast, the company’s use of additive manufacturing means it now has a single source for materials and both production hardware and software, and as such “this single point of ownership results in faster design iterations, fully-optimised product designs and high-quality end products.”