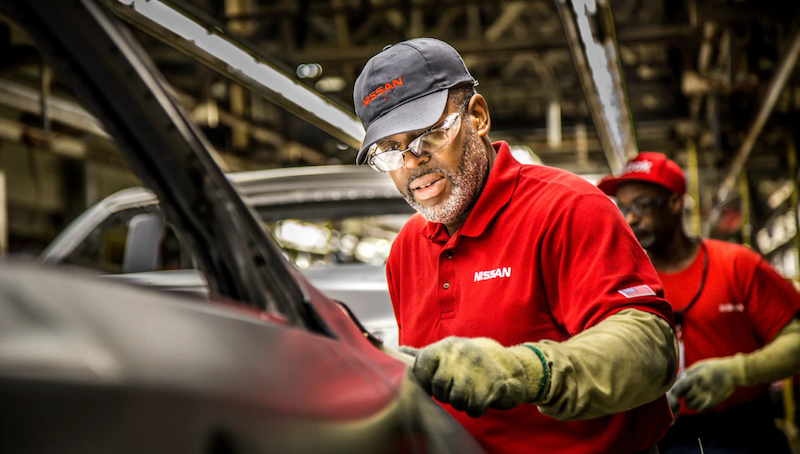 Any visitors to the Nissan plant at Smyrna, Tennessee, can’t fail to notice the proclamation above the door, The highest volume plant in North America. There’s a strong case. Plant capacity is quoted as 640,000 vehicles per year. The plant serves not only the domestic and North American markets but provide supply to about sixty countries worldwide. This includes right-hand drive variations for Australia and New Zealand. Another familar sight along the lines are fleets of beige Altimas destined for taxi service in the United Arab Emirates.

All of which requires a lot of metal and, daily, the Smyrna plant gets through over 750,000lbs (340,000kg) of steel and 28,000lbs (12,700kg) of aluminium. The entire stamping plant is over 480,000 sq.ft (44,600 sq.m), making it larger than the proverbial American football field. It’s the largest stamping plant in Nissan’s global network and produces parts to support the production of 1.2 million vehicles. Besides supporting Smyrna production, the parts are shipped to the Canton Mississippi plant and other Nissan plants around the globe. The whole process begins as coils of steel weigh 40,000lbs (18,144kg) apiece. They are brought up, fed into the blanker presses and cut to shape and size. Once those blanks are cut, they’re moved over to the transfer presses and the 1,000 different dies that can be deployed.

The transfer presses range in size, with the smaller presses, 1,500 tons (1,360 tonnes), at the lower end of the scale. The largest transfer press at the plant, a Komatsu weighs 5,200 tons (4,717 tonnes) – equivalent to six loaded and fuelled 747 aircraft. It stands five storeys high, three storeys above ground, two below. It’s capable of producing 10 million pounds of force (4.5 million kilogram) in order to stamp out a one-piece body side. It was 1983 when Nissan first started operations at Smyrna, located southeast of Nashville. At the time, the town had a population of 8,000. An equivalent figure is now the headcount of Nissan staff employed at the site. Since opening, the plant has grown to become a 5.9m sq.ft facility, representing a total investment of US$6.4 billion.

Six vehicles are currently produced at the plant. Five of them are internal combustion engine models: the Pathfinder, Rogue, Infiniti QX60, Altima and Maxima. The sixth is Nissan’s Leaf electric vehicle, which first went into production at Smyrna in 2013. The next version launched last December. The plant operates two separate production lines, one for the Pathfinder, Rogue and Infiniti SUVs, while the other takes care of the Altima and Maxima sedans. As of last year, the second line has also taken on the 2018 Leaf. Despite the fundamental differences in powertrain, all of the second-line vehicles are manufactured to order without need of batching. Nevertheless, there are some variations in the production demands involving these two distinct types of vehicle. The three obvious areas are the battery, the e-powertrain and the absence of the fuel tank and lines.

Nissan copes with these differences and minimises disruption to the flow through assembly stations designed to double up and serve ICE vehicles as well as EVs. The procedures are replicated the other two Leaf production sites; at Oppama, Japan and Sunderland, UK. Though once a small town, Smyrna has proved to be a worthwhile location, helping Nissan to deliver vehicles in huge numbers and with broad variations. However, the new addition of sturdy tent on the north side of the plant, under which the finished vehicles rest, is evidence of one particular hazard that the area’s climate occasionally conjures up. In a state known for dramatic hailstorms, keeping all that assembled, painted, polished metal screened from showers of ice-lumps is the final wise move in the process.